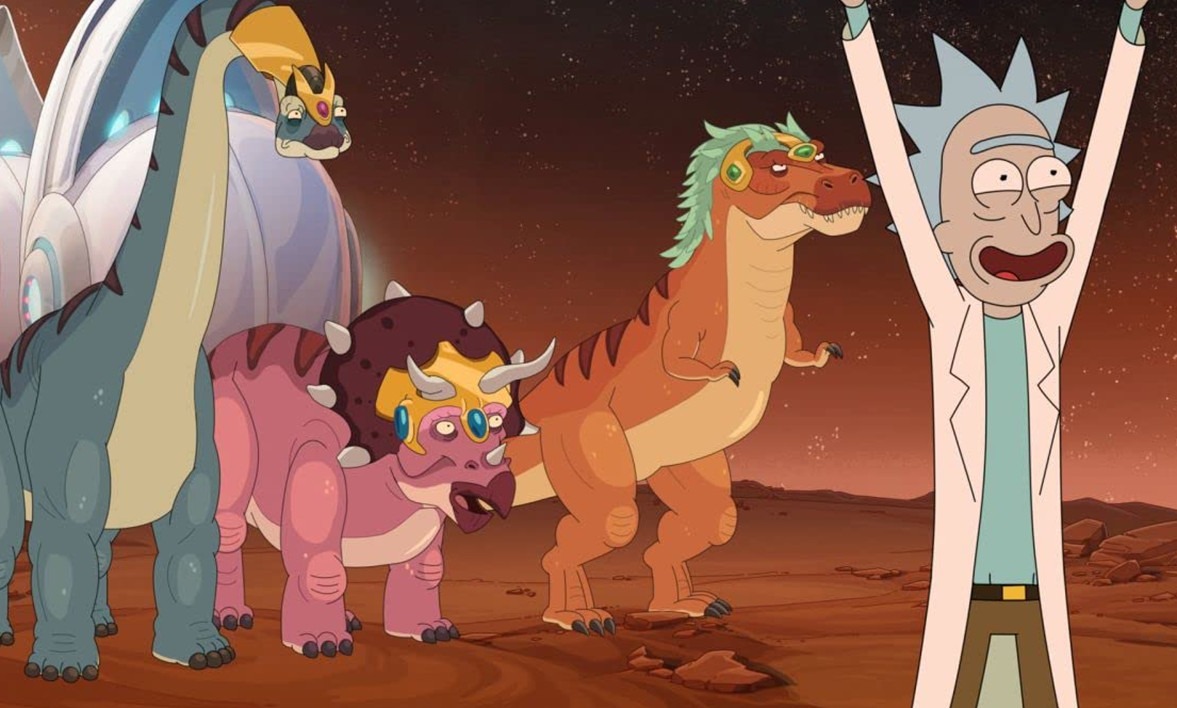 It’s the typical Rick and Morty midseason break, but before we leave the show for a month, there’s time for one last instalment. ‘JuRicksic Mort’ pits the scientist against seemingly peaceful dinosaurs that are smarter than him, and it’s a radical shift in tone from the previous episodes of this season – but, for me, one that lands less well in comparison. There’s a lot of good here, but it’s the first episode that underwhelmed me a little too.

Beth and Jerry are unavailable, so Morty needs Rick to drive him to school – for Rick, it’s a lovely distraction from Morty’s continued insistence that his grandfather finally fixes the portal gun. Morty learns that, as a result of his continued adventures, the school actually has a drill for whenever he arrives – and it is soon deployed, as a number of spaceships appear suddenly around the world. The ships are full of dinosaurs, who have returned to Earth to see how humans are getting on with running things, and they aren’t overly impressed. They suggest that they could run things while humans relax, but as peace and understanding is suddenly prevalent on the planet, Rick is called into action to resolve the situation.

Where better to start than the return of Keith David as the President of the United States? His role is somewhat more in the backseat than in previous performances, but he’s always a hilarious presence. This episode is no different – the twisted friendship/rivalry between him and Rick is always worth exploring. There’s an excellent sight gag as Rick tries to emulate Tony Hawk, and a very accurate list of things by the dinosaurs that should have made humans question their suitability for running a planet (among them, social media, butt implants and crocs). It took me a little while to place the voice of the orange dinosaur, but it’s Lisa Kudrow of Friends fame delivering a great performance – her semi-sarcasm is perfect for the dinosaurs.

It feels like, in every review, I praise the show for inventive fight sequences, but this episode does something very different – much though I struggled a little with the watch, I liked the change of pace. When things are driven by Rick being a petty man rather than a response to a dangerous situation, the whole dynamic shifts (much like in ‘The Old Man and the Seat’, an episode that gets better with every rewatch). It’s nice to see Rick face an opponent unlike him in every way and to see the negative human response to things being… well, good for a period.

‘JuRicksic Mort’ is not a bad episode, far from it, but it’s one that I struggled to connect with

However, there are many points where I feel ‘JuRicksic Mort’ doesn’t work as well as it could. There was massive potential in a plotline where everyone needs advice from Jerry, whose uniquely pathetic way of living is perfectly suited to the new order of the dinosaurs, but it is completely wasted. There’s a succession of cultural references that don’t work particularly well (although that is maybe because they’re all specifically American), largely because they’re only employed in a surface way – it’s the Elon Tusk gag again. And lastly, one of the major canonical shifts that have been hanging over the season is quickly mentioned and dismissed – Rick laments that he could have mined the premise for many more episodes. It’s a bit of a shame that the writers decided to jettison the thread so soon.

I need to stress that ‘JuRicksic Mort’ is not a bad episode, far from it, but it’s one that I struggled to connect with. One that I felt failed to live up to its potential – that’s not a good feeling for a show as consistently inventive and surprising as Rick and Morty. So I go into the mid-season break on a comparative low, but things are in an interesting place for when we return – keep your eyes peeled for when the show comes back!