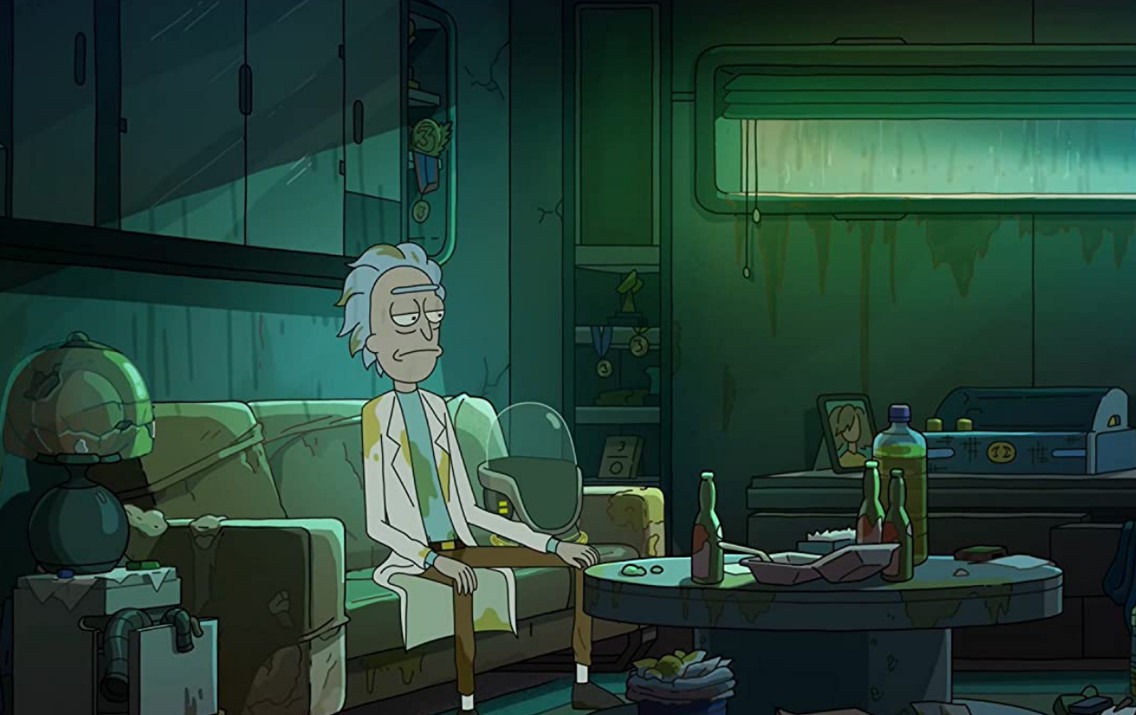 After last week’s very meta instalment of Rick and Morty shattered the very conceptions of storytelling and writing, what would follow was anyone’s guess. As it turns out, the answer was a surprisingly intimate episode that somehow transforms pee jokes into hard-hitting character work – yep, only on Rick and Morty. But, despite a bizarre presence, ‘Analyze Piss’ comes highly recommended as an example of the unexpected heart this show can mine when it tries.

After a battle with his arch-enemy Mr Nimbus (who still controls the police), Morty notes that the amount of villains coming after Rick is getting a bit silly. After a therapy session with Dr Wong (Susan Sarandon), Rick comes to the realisation that he doesn’t need to face everyone who comes his way, and he decides to sit back on the latest minor threat – a villain called Piss Master (Will Forte), who comes to the Smith house and sprays urine at the windows. Rick sits it out and, after the villain directs an inappropriate comment towards Summer, it’s Jerry’s time to protect the family, taking the two patriarchs on a quest to discover themselves.

although things ultimately end in a self-contained manner, it’s impressive how much Rick evolves throughout it

Admittedly, a villain based around urine does not sound like the most compelling presence, yet it’s a launching-off point for a really deep dive into Rick’s psyche, going to some heavy places in the process. There are definite vibes of ‘The Old Man and the Seat’ and, if you’ve seen my thoughts on that episode, you’ll know that’s praise indeed. The show works really well when it balances its absurdity and inventiveness with character beats, and ‘Analyze Piss’ is a wonderful example. There’s a sequence in the middle of the episode, one that I won’t ruin, that is honestly heart-breaking, and it lands perfectly.

The show delves into Rick’s character surprisingly infrequently, and it always produces fantastic character beats when it does. This is an emotionally complex story and one that looks at Rick the man without focusing on his nihilism, a very welcome change. The concept of what happens when Rick takes some time off is a fascinating one that breeds an interesting and enjoyable narrative – one that allows Jerry a brief win and provides Rick with both highs and lows. We get deeper here than I expected to go, and although things ultimately end in a self-contained manner, it’s impressive how much Rick evolves throughout it.

it’s definitely clear that, in terms of laughs, this is one of the weaker episodes of the sixth series

That’s not to say that there are not also a good few laughs in this instalment, and a lot of it comes through the random cameos. Rick must face a myriad of bizarre villains, and I let out a solid belly laugh at some of the faces on a planet of Hitlers. There’s also a lot of Jerry, which is always an indicator of a good time (the other Smiths feature, but the bulk of the episode is mainly Rick and Jerry, not that that’s a complaint). But it’s definitely clear that, in terms of laughs, this is one of the weaker episodes of the sixth series – again, not a complaint, but part of the noticeable mood whiplash after last week. It’s also the first time that the post-credits tag didn’t land with me, because it’s neither particularly funny nor out-there.

‘Analyze Piss’ is another in series six’s strong run of form, and one that uses a daft premise to go deep on the character work. I feel like we cover in 20 minutes what other shows would take hours to address – yet it works, and it gives us a load of Jerry too. There are only three more episodes left to this run, and now the show is firing on the comedic and poignancy fronts, I’m looking forward to seeing what comes next.