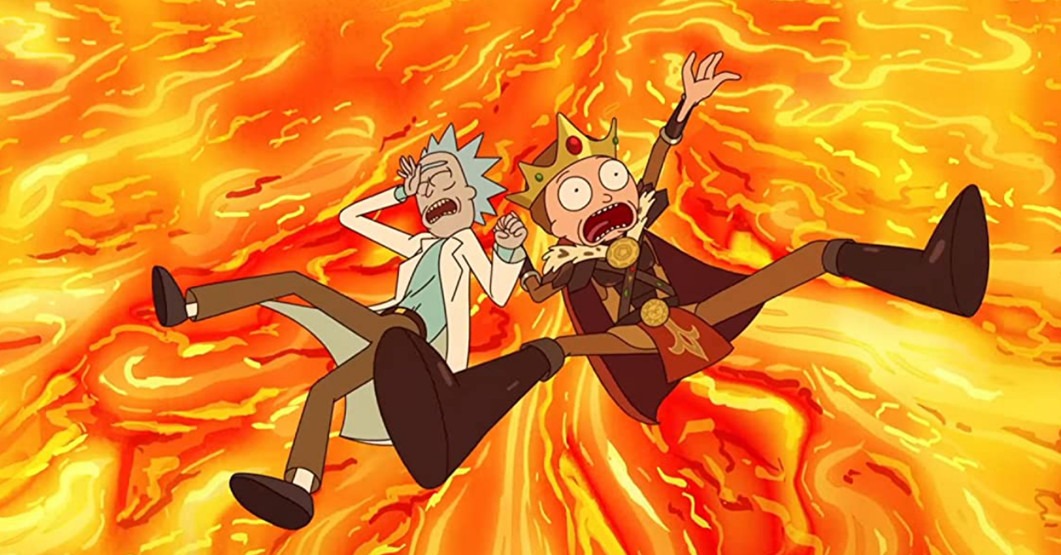 Rick and Morty: ‘A Rick in King Mortur’s Mort’

If you ever doubted the singular nature of a show like Rick and Morty, remember that they last week used a villain obsessed with urine to dig deep into depression and purpose. This week’s premise is potentially similarly silly, as the lead characters engage with genitally-mutilating knights in an adventure that puts Morty at its heart, and sees Rick face one of his toughest challenges yet – being genuinely nice. It’s a surprisingly funny outing given a joke that stretches a little thin, but it mostly works a treat.

On a trip to an asteroid food pop-up stall, Morty is offered a knighthood after a random act of kindness. The honourable Knights of the Sun see in Morty a young man who can continue their quest to protect the Solar System and, despite Rick’s warning that it couldn’t possibly lead to anything good, he is soon guilted into taking the sword of Sir Helios. Morty is taken away into the Sun to accept his oath as Sir Mortaniel, but he learns that the knighthood comes with a sacrifice – he must cut off his own penis. Morty’s indecision has serious consequences for the Solar System, and he must navigate these issues with the help of a supportive Rick.

The guest cast is stacked here, and even with some of the big names it has produced in the past, I was never imagining that David Mitchell would be part of the show. He, Robert Webb and Matt King of Peep Show fame all play knights, as does Daniel Radcliffe, and there’s a hint of awkward British delivery that hits the mark beautifully for me. Elsewhere, Jack Black appears as the Viscount of Venus, booming and hamming in a way that makes me more than a little excited to hear him play Bowser in the Mario film.

as Morty and I suspected, it would all be one big ‘Vat of Acid’ trick

I loved the inventiveness of ‘A Rick in King Mortur’s Mort’, and the show often does well with mining gold from surreal premises. Although I frequently write that we get through a lot in an average 22-minute Rick and Morty, we really do here – the pace never lets up, and it fits in a lot of story and gags in equal measure. Don’t expect this one to pack any pathos, nor any of the gut punches the show can offer up – this is silly, and it’s here to make you laugh. And there are lots of good set pieces and asides on the way, including what a knight finds on Google to cure his depression, and the incredible measures taken by the delegates of the Solar System to ensure that a penis is cut off. It’s a joke that does eventually lose its power, but I can’t think of any other shows that would get an episode’s worth of content from a castration gag.

This is mostly a throwaway instalment, but for the dynamic at its heart – the evolution of Rick, into what threatens to be an emotionally-functional adult. Hurt at Morty’s reluctance to listen to him, he opts to try and be nicer to his grandson, and to work through a solution to the problem with him, even turning down a simple reality hop in a way that first-series Rick definitely would have chosen. Hot on the heels of his therapy last episode and his emotional journey with the Piss Master, it seems that the show is going to some new places with the scientist, and I’m all for it. Whether or not it will last, kudos to the writers for finding new places to take the character (even if, as Morty and I suspected, it would all be one big ‘Vat of Acid’ trick).

the question now is what’s in store for the finale

We’re nearing the end of this run of Rick and Morty, and even the weaker instalments have been strong ones. I’m liking what the show is doing with Rick, and the question now is what’s in store for the finale. There are many lingering threads and unresolved questions answered, so will the writers bring some back? Or will we complete the trifecta with another episode concerned with bodily fluids and the organs that produce them? Either way, I’m looking forward to it!