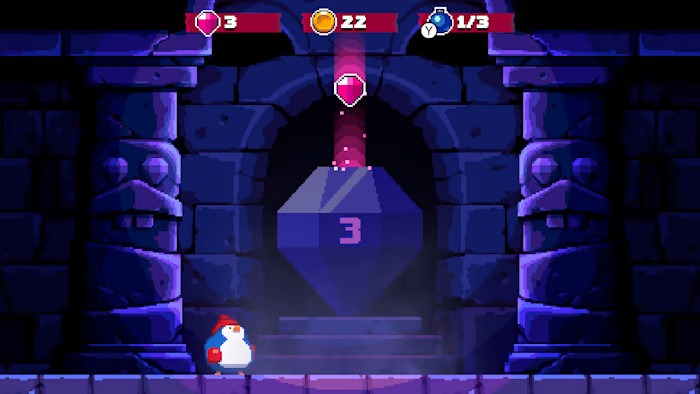 ‘The Punchuin’ review: fun but slight

When I was little, my favourite animal by far was the penguin. There was something about them, both so regal yet so silly, and I remember the film March of the Penguins coming out and blowing me away. I’m mentioning this because a game was recently released that mashes two of my interests together – puzzle games, and the adorableness of the penguin – into one cohesive package. The Punchuin is a lovely game, and it was clearly a labour of love for the team at Shin’en. But I have to be an honest reviewer and, although I enjoyed the game, it’s hard to overlook how slight it is, finishing before it really gets going.

The game is an interesting mix of puzzling and a platform adventure. You play as the Punchuin, who is tasked by a talking boxing glove to investigate the secrets of Punch Mountain (there’s no more complexity to the story than that, not that it’s necessary). This largely comes down to playing match-three puzzles – you need to meet the quota of blocks listed at the side of the screen, and this is repeated a lot, with some minor tweaks to the formula in terms of obstructive ice blocks and screen flips. There are also a few matching puzzles, as well as a number of one-off missions prompted by characters on the map.

Even if you play in short bursts, the game won’t last too long

Exploring this world was great fun, because The Punchuin looks great. It has a pixel-art style and some great sprite work that is really charming – the central character in particular is a joy to control, and getting him to punch blocks rarely felt old. There’s also a bouncy soundtrack that complements the action well, which makes the missions and the time you spend in each area to be enjoyable. It never feels old, but that’s for a bad reason as well as a good one – there’s not enough time to get tired.

As I alluded to in the introduction, The Punchuin is not a long game, and you could quite easily be done with it in an afternoon. I played the game in a state of being ill with flu, and even then, I was done in two and a half hours – even for a budget game like this, that’s not a lot of time. There’s a lack of content that really affects the experience. You have four worlds, each boasting around ten levels, and you’re through them in no time. It feels like a game in this genre should have so much more content, and it’s a massive mark against The Punchuin.

Sadly, it’s this that impacts on recommending the game too much – it’s charming, and good fun, but it’s too slight to occupy much of your time. If you’re after a throwaway puzzle-adventure, then The Punchuin will satisfy your craving, but it won’t do so for too long. A full-length Punchuin would be an essential puzzler, and the core puzzle elements are strong, but it’s just too little – even if you play in short bursts, the game won’t last too long.