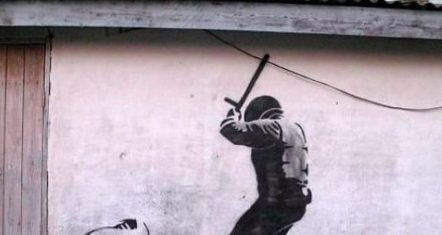 Banksy in Ukraine: an anti-war act through art

Renowned British street artist, Banksy, whose identity is still a mystery, announced recently on his Instagram that he has created seven murals in multiple collapsed areas in Ukraine. These areas are located in Kyiv, the suburb of Irpin, and Borodyanka- the city most critically hit by the Russian invasion.

This mesmerised me. I could recognise the artist’s unique personality throughout the graffiti, and in light of the terror of the Russian occupation of multiple Ukrainian cities, it made me realise the impact of this evocative antiwar act. But it made me wonder: what is Banksy trying to achieve with his graffiti, and how is his antiwar artwork affecting Ukrainians in the midst of the Russian invasion terror?

After doing a bit of research I discovered that Banksy had confirmed seven new murals across Ukraine as mentioned above, but one really spoke to me – an image of a young boy flipping an older man onto his back. The significance of this is that it had been graffitied onto a broken-down kindergarten, so speculation says that Vladimir Putin is the old man, and the kid is taking back his power which was stripped away by this dictator. Ukraine was in a state of trauma in November 2022. The Russian forces attacked Berdyansk, Chernihiv, Kharkiv, and Kyiv, resulting in an insane 7.9 million people crossing the borders into Poland from February to November 29, 2022. Yet, Bansky’s art inspires love and appreciation, as he is willing to risk his mysterious life in order to provide citizens with anti-war graffiti to relate to and know they are not alone in a dark time.

Banksy’s work puts pivotal significance on those who must live through the turmoil.

Since the invasion, we’ve seen power shortages, looming blackouts, and a general state of unrest, unseen since the days of the 80s, and that is just the west. Though much of the coverage of the war nowadays neglects the civilian perspective, focusing predominantly on the geopolitical chess game of the piece, Banksy’s work puts pivotal significance on those who must live through the turmoil on the ground. The gas mask-clad housewife in curlers and a dressing gown is a punchy image of normality interrupted by horror, a theme that is closer to home than many may hope for. But also, shows how much routine emergency procedures become in such an environment. The monotony of violence is what makes these images so haunting.

The impact the war on Ukrainians is exemplified by Bansky’s posts on his Instagram. One post shows a photo of a gymnast doing a handset, and on another post, we see a completely destroyed building in Borodyanka, which was graffitied by him. Whilst, the second post is a video of how he got involved in the Ukraine war, we see him setting up the graffiti and the state of Ukraine in November 2022. This is critical to Ukraine, due to the engagement of Banksy’s work. The posts received  “2,250,000 likes on the photos and 1,296,000 likes on the Ukraine video.”   – an incredible response which raised awareness in the Western world

Canadian philosopher, Marshall McLuhen, states that ‘Vietnam was lost in the living rooms of America,’ an apt description of how the visibility of war oftentimes is enough to end it. Though the war still rages, the notion of creatives to uncover the truth about the most bedevilling inconsistencies in war’s morality continues, especially in this case. From ‘War Pigs’ to Tim Page – and Carol Ann-Duffy’s poem based on such a profession – the arts have always dissented violence and brutality.

the works of war poets are usually by those who experienced it first-hand.

The most hard-hitting thought is usually that from those who, either by chance or design, find themselves in the actual, bloody fray. In this case, the works of photographers in war zones have been well received. Other than that, the works of war poets are usually by those who experienced it first-hand. For instance, Wilfred Owen died in the trenches, but his poetry survived and exemplified his perspective to those who could not be there. The artwork by Banksy similarly signifies the brutality or monotonous horror from the bottom up, not the top down, from a comfy office. He had to be on the ground, face the same potential danger and work on similarly crumbling streets to make these pieces.

Rather through posting detached tweets of support, Banksy has walked into the fire himself, to face the same perils. This is an admirable stance of solidarity. It is not simply an allegiance that will never be made flesh in the fires of actual war, but a simple act of kindness to the civilians who are suffering from it involuntarily.