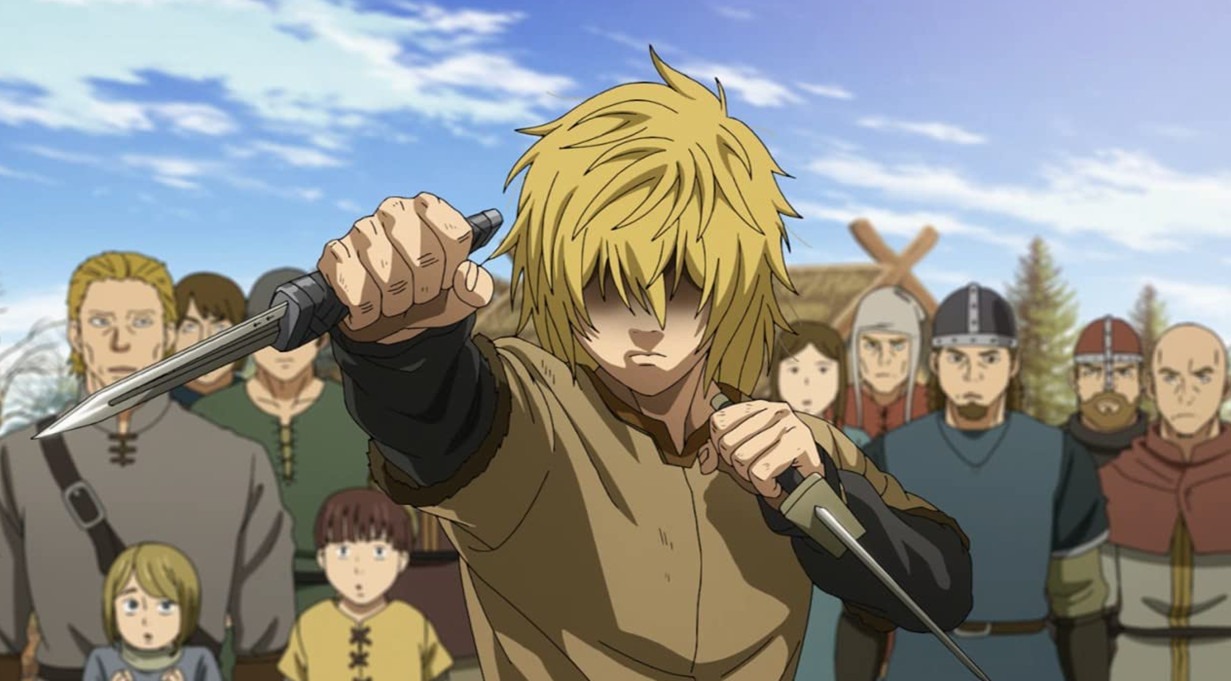 When violence and death are glorified, and a man’s life is judged based on the number of enemies he has decapitated, to live as a pacifist would be more fruitless than that of a life of pillaging, war, and chaos. Yet that is the goal of Vinland Saga’s Thorfinn Karlsefni, to live as a good man in a world of monsters.

Thors’ teaching is what Thorfinn struggles to adopt throughout the story of Vinland Saga; that a true warrior doesn’t romanticize violence but resists it

Thorfinn was first introduced to pacifism through his father, Thors, the Troll of the Jolmsvikings. Thors was a formidable warrior, who commanded respect and who became famous for his brutality and efficiency as a killing machine during his time serving the Danish king. However, when we see him in the anime, he lives in a remote fishing village in Iceland and shows mercy to escaped slaves that wander onto his property. Thors attempts to instil in Thorfinn the ideal that ‘he has no enemies’ and that ‘a true warrior doesn’t need a sword’. Thors’ teaching is what Thorfinn struggles to adopt throughout the story of Vinland Saga; that a true warrior doesn’t romanticize violence but resists it, seeing conflict for the farce that it is and choosing to be better every day.

But, despite Thors’ wisdom, his son was young and naturally, immature, so after witnessing his father killed at the hands of cunning mercenary Askeladd, Thorfinn quickly forgot Thors’ teachings and ironically became obsessed with avenging him by slaughtering the man who killed his father.

It is interesting to see Thorfinn’s mental state during the first season of the anime. He is attempting to do right by his father without realising that his father’s true wish for him would be to stop the cycle of violence from repeating itself. It gets to a point where Throfinn spends every waking moment thinking of how to kill Askeladd, training and scheming, never once questioning the purpose of his actions or his goals after his enemy has been defeated. This is what makes the last episode of the first season so impactful. After Askeladd is killed by the hand of another, Thorfinn is directionless, his life ambition of revenge is taken in front of his very eyes and he is forced to come to terms with the fact that his obsession with death and violence was a façade to mask the immature, naïve, scared little kid that has not matured since the death of his father.

The following arc is arguably the most important for Thorfinn’s character development. It takes place two years after the ending of the first season of the anime where Thorfinn is a slave that has been sold to a wealthy landowner in Denmark. In the events transgressing this arc, it is clear that Thorfinn wants to change, he is haunted by guilt and the memories of the men he has killed but the writing in Vinland Saga is subtle and progresses slowly to give a feeling of authenticity to Thorfinn’s redemption. He is met with instances where a younger him would have quickly lashed out to kill his opponent, but a more mature Thorfinn begins attempting to resolve conflicts in alternative ways, messing up at times and lashing out but quickly regretting this where a younger version of our protagonist would have revelled in the bloodshed. Thorfinn’s development as a character reaches one of its peaks when he chooses to be pummelled by an enemy warrior to prevent the invasion of the farm by King Canute, and after what seemed like an eternity, with a bloody and swollen face he declares, as his father did, ‘I have no enemies at all’.

Thorfinn’s philosophy is one of struggle, suffering, and kindness in the face of brutality, and one that feels entirely human, he could not have reached where he is now if it hadn’t been for the conflict he had to surmise. It will be interesting to see how Makoto Yukimura concludes the story of this incredible character.