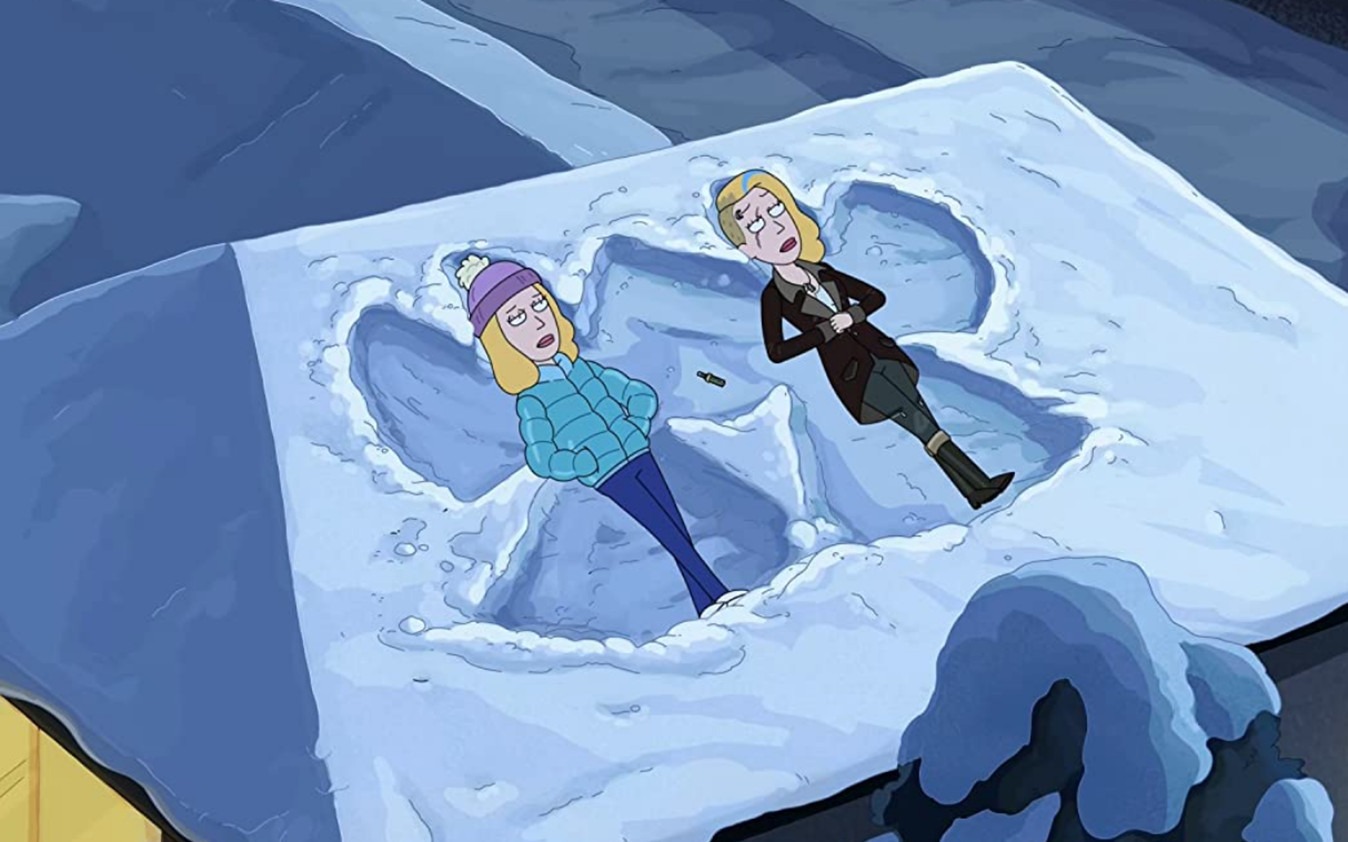 Rick and Morty have been powering through the sci-fi adventures so far in this sixth series, with both the excellent ‘Solaricks’ and ‘Rick: A Mort Well Lived’ using the trappings of the genre to pull out some inspired and inventive stories. But this is a show that bounces around a lot, and soon that run would come to an end, as it has with ‘Bethic Twinstinct’. In lieu of a massive sci-fi story, we instead get an Earthbound adventure that is very intimate (in every sense of the word). That doesn’t hurt it, though, far from it – it’s a change of pace that I think works beautifully, doing a lot to get the whole family involved in the story.

It’s another Thanksgiving in the Smith household, and before the turkey, Jerry makes a toast about how much Beth means to him, and his inability to live without her. Space Beth is visiting the family, and soon learns just how much she has in common with Housewife Beth – however, as they come closer, their newfound connection threatens to tear apart the family and destroy Jerry. Meanwhile, Morty has a new games console, and the family soon start distracting themselves with a selection of hyper-realistic games.

A warning before we start the review – if you weren’t a fan of the giant incest baby last series, maybe give this episode a miss (somewhat unusually among critics, I loved it). Because ‘Bethic Instinct’ is a wonderful example of the show using its sci-fi premise to tell the kind of story that only it can – it’s character-driven and likely to result in lots of awkward laughter. Beth is at the heart of this instalment, in both forms, and it’s worth praising Sarah Chalke for her vocal range. With the development that occurs this time round, I’m hoping that this is not one of the show’s one-off episodes – it deserves to linger because the writers are really missing a trick if the emotional breakdowns that occur here are swiftly forgotten.

If you read any of my previous Rick and Morty blogs, you’ll know that I’m a big fan of Jerry, and this episode does a lot with the character – it gives him some cracking lines, a surprising level of agency and some poignant development. More Jerry is always a win, and that continues to be true, from his thrill at getting to complete a jigsaw to the most Jerry-like defence mechanism. Jerry plays a big part in the climax, one that is darkly traumatising and boasts some interesting power play. Never before has a line reading sparked such distress and hilarity as the one Rick and the kids hear. (And keep your eyes open for the Jerryboree!)

Compared to the laughs of the previous two instalments, it’s noticeable that ‘Bethic Instinct’ is packing fewer laugh-out-loud moments (although it makes up for that with a fair share of uneasy laughs). Much of the humour comes in the B-story, where the Smith children play with Morty’s new games console. This is a concept that isn’t played enough to outstay its welcome, and it results in some great moments, from a knock-off Street Fighter to a tedious Asteroids imitation set in a mostly empty space. I also loved the text adventure game, both due to how surreal it is and the brilliant reactions by Rick, Morty and Summer.

I’m not going to claim that ‘Bethic Twinstinct’ is the show’s best episode, but I thought it was really good – it made me laugh and shift a little uncomfortably in my seat, and it takes our characters to new and believable places. At one point, Morty begs Rick to fix the portal gun – it’d be a great idea, but I’m not complaining about its loss if we get more stories like this.