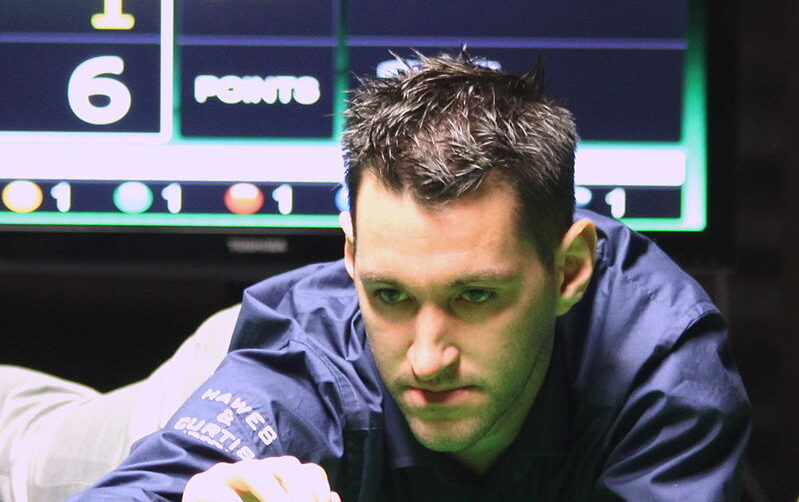 Top seeds out in UK Championship snooker first round

The 2022 UK Championship snooker is underway, and the first day threw up a number of surprises and shock results – most notably, the elimination of three of the top seeds. Defending champion Zhao Xintong was knocked out after Sam Craigie produced a strong performance to win four consecutive frames, while Neil Robertson and John Higgins were stunned by Joe Perry and Tom Ford respectively.

Zhao had a breakthrough season last year, but he openly admitted that the pressure of defending his title was weighing on him as he began the tournament. Even still, it was expected that he would easily brush aside Craigie, who had never before reached the last 16 of any Triple Crown event. It was a nervy affair to begin with, and the players shared the opening four frames – Craigie made a break of 78 in the fourth to settle his nerves, and it clearly paid off.

After the break, it was all Craigie. He was in control in frame five, and then Zhao missed chances in both frames six and seven to steal. He couldn’t assert himself, and Craigie was soon within one of victory. Zhao once again failed to punish his opponent, even as he missed a couple of chances, and soon a century break of 104 was enough to secure a 6-2 win and end Zhao’s title defence before it ever really began. Craigie will face Ryan Day, who defeated veteran Jimmy White to advance.

Ford produced when it counted, making breaks of 99 and 90 to close out the match 6-4 and dismiss the four-time world champion

It was the same score line as Perry faced Robertson – the Australian player was obviously a little unwell, but that shouldn’t take away from Perry’s excellent play. In the first mini-session, Robertson failed to put a frame on the board. A scrappy start soon gave way to a century of 102. After Robertson called a foul of himself in frame two, there was a safety battle, which eventually gave Perry a chance to make an 85 clearance and develop a two-frame lead. Positional issues ended Robertson’s chance in the third frame, and Perry took a few opportunities in the fourth to make it 4-0.

Robertson appeared to be fighting after the interval, making an 88 to put one on the board, but Perry responded with an 81 to move within one of victory. It got tense in frame seven, as both players missed chances – once Perry hit the jaws on a match-ball pink, Robertson compiled 62 to keep the match alive. It was a brief respite – once he broke down on 41 in frame eight, Perry cleared to the pink, with a 64 securing his place in the next round.

Then it was Ford against Higgins, in a match that proved unexpectedly close and ended in favour of the Englishman. Ford was first on the board after a tense first frame, but Higgins levelled with a 54 break and a brilliant snooker behind the brown. The next two frames were very scrappy, with both players missing a lot of chances that they should have been converting into pots, and the 2-2 score line at the interval was a fair reflection of what had proved a bitty contest thus far.

It appeared Higgins had a bit of momentum after the break, making an 84 to move in front for the first time all match. Ford responded, making 47 before losing position and another 46 after Higgins failed to capitalise to level once again. It changed hands once again – Ford made 71 in frame seven, Higgins responded with breaks of 55 and 36 – but then Ford began to take control. He produced when it counted, making breaks of 99 and 90 to close out the match 6-4 and dismiss the four-time world champion.