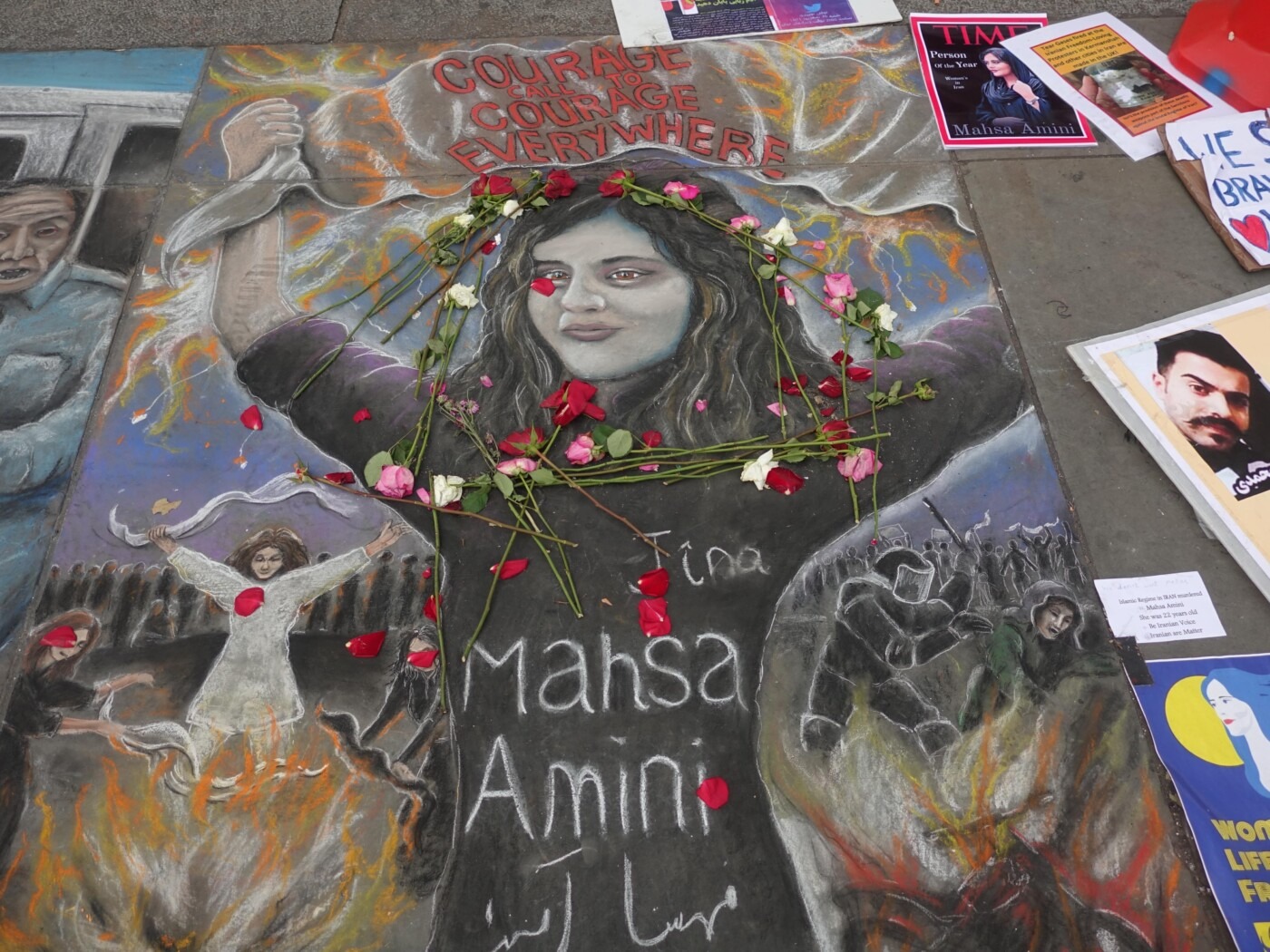 Iranian protests: is this the beginning of a revolution?

A 22-year-old woman from Saqqez in the Iranian province of Kurdistan who is on a family visit to Tehran is detained by members of the ‘morality police’ for allegedly wearing her headscarf incorrectly in mid-September 2022. Nothing unusual under the Islamic Republic, and certainly not the stuff of headlines in some of Europe and North America’s most prominent newspapers — had it not been for the untimely death of that same young woman, Mahsa Amini, in a Tehran hospital on 16 September. The most widely accepted explanation, which has been put forward by Amini’s family and corroborated by leaked medical scans, but denied by Iranian government officials, is that she was mistreated and severely beaten in police custody.

Despite conflicting accounts of the cause, Mahsa Amini’s death has sparked a protest movement in Iran that has been called ‘unprecedented’. Protestors have taken to the streets in Tehran, Tabriz, Mashad, Qom, and many other cities across the country, with women publicly removing their hijabs, sometimes burning them, and some cutting their hair — a gesture that stems from Kurdish culture, where it is used to mourn the death of a family member.

The Iranian region of Kurdistan appears to be one of the epicentres of this movement as well as a focal point of state-sanctioned repression. According to the Oslo-based Hengaw Organization for Human Rights, a massive deployment of security forces has occurred in several Kurdish cities, including Saqqez, and the provincial capital of Sanandaj. More than 2,500 people have been arrested in Kurdish cities since the beginning of the protests and a small number of protestors have been killed.

The faces and the martyrs of this movement are overwhelmingly young and female.

Though particularly brutal in Kurdistan, violent crackdowns on protestors are also occurring in other regions, with some areas allegedly resembling ‘war zones’. According to NGO Iran Human Rights, the death toll had reached 201, including 23 children, by 12 October. The real numbers are assumed to be higher as independent verification remains difficult, not least due to a partial shutdown of mobile internet, social media platforms, and messenger services, which makes it impossible to ascertain what exactly is happening in Iran.

The Iranian government appears set on eliminating any potential leading figures that might be able to funnel the wave of general discontent sweeping through the country into concrete revolutionary action. More than 300 people have been charged with ‘waging war on God’ in Tehran alone, and almost 12,500 people have been arrested across the country so far. The recent fire at Evin Prison, with a death toll of at least eight, has been interpreted by some as an attempt to get rid of prominent opposition figures who were being held there.

Students at universities and schools, and young people more generally, appear to be one of the most vocal groups in this movement. Clashes between protestors at Sharif University in Tehran and security forces received extensive media coverage, as did the raiding of Shahed girls’ high school in Ardabil on 13 October which involved beating girls who refused to sing pro-government songs, some of whom had to be taken to the hospital and died of their injuries. However easy it might be to get the impression that both the faces and the martyrs of this movement are overwhelmingly young and female, the role of industrial action should not be underplayed.

The possibility of a nationwide general strike might deal the final blow to Iran’s already troubled economy.

Some workers in the country’s vital oil sector went on strike on 10 October, and there have been reports of shops remaining closed in many cities and even strikes in some places, evoking the possibility of a nationwide general strike that might deal the final blow to Iran’s already troubled economy. A day earlier, on 9 October, government-critical slogans appeared on state television, presumably caused by hackers.

Due to its tumultuous history, including a CIA-backed coup d’état in 1953, the 1978/79 Revolution that toppled the regime of the Shah, and the Green Wave Movement of 2009, Iran is no stranger to instances of turmoil and civil unrest. While the Pahlavi monarchy has in retrospect sometimes been idealised as a time of individual liberties and secularism, it was no less of an authoritarian regime than the current one, equipped with the secret police SAVAK that made liberal use of torture and oversaw the silencing of dissenting voices through censorship.

Protests against the compulsory hijab in Iran date back to 1979 — the year of the Islamic Revolution — itself, when women took to the streets in Tehran on the occasion of International Women’s Day (8 March) to voice their discontent with compulsory veiling in workplaces and government buildings. Veiling in public spaces became mandatory for all women in Iran in 1983 (though the relevant laws do not specify what constitutes correct veiling, which presents a significant legal issue as it leaves the precise definition of proper attire up to interpretation by the ‘morality police’ who are charged with enforcing these laws). The legal situation has not changed by much since then, but hijab fashion has: Part of the outrage can be explained by the fact that a loosely worn hijab is nothing unusual in Iran. In fact, many Iranian women wear their headscarves in such a way that the front part of their hair is clearly visible, and only the back is covered.

This is not a protest for reform. This is an uprising demanding the end of the Islamic Republic.

In addition to this, a wide range of underlying social causes are fuelling this movement beyond the initial spark provided by Mahsa Amini’s death, as Iranians’ grievances are numerous and far-reaching.

The state of the Iranian economy is nothing short of disastrous: pre-existing sanctions placed on Iran by the United States and European countries were intended to target political leaders but have severely affected the general population. Coupled with the consequences of the Covid-19 pandemic and the current economic difficulties faced by many countries around the world, they have led to soaring inflation and astronomically high prices of food and other basic necessities. Corruption is another major cause of Iranians’ discontent, as the country was ranked 150th out of 180 countries on NGO Transparency International’s Corruption Perception Index in 2021.

What sets this movement apart from previous protests — making it a real threat to Iran’s government — is the questioning of the fundamental principles and the religious-fundamentalist foundations of the current political system. As Roham Alvandi, Associate Professor of International History at the London School of Economics, explained in an interview with CNN: “This is not a protest for reform. This is an uprising demanding the end of the Islamic Republic. And that is something completely different to what we’ve seen before.” This is also reflected in the most used chants of this movement. The slogan most widely spread on social media is ‘Jin. Jiyan. Azadî.’ (Woman. Life. Freedom.), which has its roots in the Kurdish rights movement. However, ‘Death to the Dictator!’ — a callback to 1978/79’s ‘Death to the Shah!’, likening Ayatollah Ali Khamenei to Mohammad Reza Pahlavi, the last Shah of Iran — is also common among protestors.

The hashtag #IranRevolution2022 has been trending on Twitter, and Iranian human rights activist and Nobel Peace Prize laureate Shirin Ebadi suggested in a recent interview that since the groups participating in the movement are very heterogenous, we might be witnessing the beginning of a revolution. On the other hand, Arshin Adib-Moghaddam, Professor in Global Thought and Comparative Philosophies at SOAS, has argued that a real revolution would require the Iranian military, and notably the Revolutionary Guard, to side with the protestors, as was the case in 1979. This seems unlikely given how firmly rooted the Revolutionary Guard is in the current political system.

If this is indeed the beginning of a revolution, the Iranian government’s options are limited.

Whether this movement will indeed prove to be a revolutionary one that changes Iranian politics and society for good remains to be seen. Meanwhile, if this is indeed the beginning of a revolution, the Iranian government’s options are limited.

Initially a regime with the intention to control every aspect of Iranians’ lives, the Islamic Republic’s hold over people’s everyday lives has crumbled over the past four decades. For a regime whose tools of control have become so few, every single one is precious. Perhaps this is why Ebrahim Raisi, elected President of Iran in the summer of 2021, proposed a re-Islamisation campaign involving an extension and more rigorous enforcement of hijab legislation that, in his view, would bring proper religious values back into Iranians’ homes and lives. In a first even for the Iranian government’s standards, an interview with President Raisi scheduled for 21 September was cancelled after he requested journalist Christiane Amanpour wear a headscarf not on Iranian soil, but at the General Assembly in New York City.

President Raisi said on 22 September that the events leading to Mahsa Amini’s death should be investigated. An official medical report was released on 7 October, citing long-term effects of a childhood surgery for a brain tumour and “not blows to the body” as the cause of death. Not only does this directly contradict the previous state-sanctioned cause of death (a heart attack), but the fact that government officials deemed it necessary to so much as address the allegations surrounding Mahsa Amini’s death might be an indicator of just how threatened this government feels by the current protest movement.

Ayatollah Ali Khamenei, Iran’s de-facto leader, first reacted publicly to the protests on 3 October, acknowledging the existence of the protests, but blaming them on ‘outside agitators’ allegedly tied to the United States and Israel. And the seemingly unified stance of Iran’s political elite is beginning to show cracks, as well-known establishment politician Ali Larijani questioned Khamenei’s rigid stance on the question of the hijab in a recent interview.

Solidarity rallies have taken place in cities all over the world, including Istanbul, Los Angeles, Paris, and most recently, more than 80,000 protestors in Berlin.

What’s more, suppressing these protests effectively appears to be difficult for the Iranian government, not only because it is a leaderless movement for now, but also because of the global attention it is receiving. Solidarity rallies have taken place in cities all over the world, including Istanbul, Los Angeles, Paris, and most recently, more than 80,000 protestors in Berlin. The role of the Iranian diaspora in amplifying the voices of those protesting in the streets of Iranian cities is not to be underestimated, with around 4 million Iranians (many of whom left the country following the Islamic revolution) and people of Iranian descent living abroad — compared to 85 million in Iran itself.

In stark contrast to the outpouring of solidarity from civil society actors, international reactions on the state level have been mixed. Canadian Prime Minister Justin Trudeau has been one of the most vocal supporters of the protests, as the country prides itself on having adopted a feminist approach to foreign policy. Meanwhile, after facing criticism for what was perceived as a lukewarm reaction at best by many British-Iranians, the British government has imposed sanctions on members of the Iranian ‘morality police’ and senior security officials, as have the United States. The European Parliament has condemned Mahsa Amini’s death and called it a ‘killing’, and Swedish MEP Abir Al-Sahlani cut her hair in the plenary to express her solidarity with Iranian women. EU member states came to an agreement concerning sanctions on Iranian officials on 12 October.

Meanwhile, the protests continue, with the 40-day anniversary of Mahsa Amini’s death drawing large crowds to her hometown of Saqqez. This movement sparks many questions — about the events themselves, which can be hard to verify from abroad, just as much as about the possible interpretations: What are the Iranian government’s next steps? How will these protests develop? Is this the beginning of a revolution? It might be — yet, claiming anything more at the present moment is merely unsubstantiated speculation.