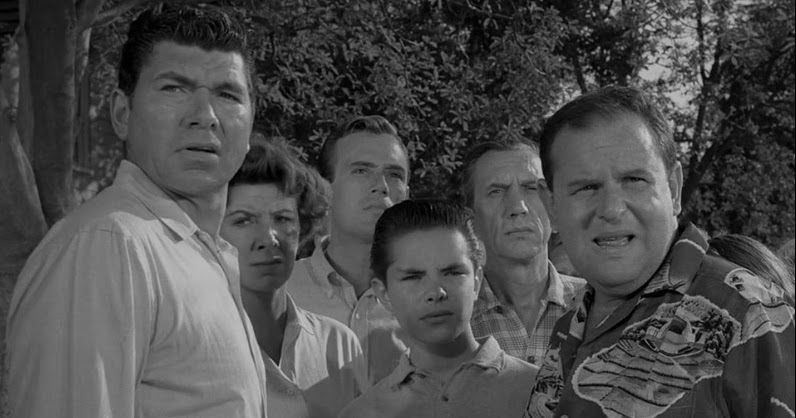 The Perfect Episode: The Twilight Zone’s ‘The Monsters are due on Maple Street’

There are few TV shows as iconic as The Twilight Zone – Rod Serling’s masterpiece has lived on for more reasons than its famous mysterious theme tune. Running from 1959 to the mid-60s, the show used an anthology format with sci-fi and horror trappings to push the boundaries of storytelling and present its audience with clever morality plays, often laced with a twist.

Many of these stories have lived on, been retold or parodied (especially by The Simpsons), but they still hold up incredibly well today because many of them are timeless. It’s a show full of classics, and the episode I want to discuss today is one of the best, and one that is terrifying in how much the themes it discusses are still relevant today. That episode – ‘The Monsters Are Due On Maple Street’.

The episode begins on the everyday Maple Street, a cosy little suburban American community where children play and everyone gets along. One day in summer, the residents hear a noise and see a light in the sky, something they assume is a meteor. But this, according to Serling’s opening narration, is Maple Street “in the last calm and reflective moment – before the monsters came”. If you haven’t seen the episode, go away and watch it first, because it really packs a punch if you don’t know what is going to happen. I’m going to continue with spoilers.

The Twilight Zone thrived on offering the viewer set-ups like this one and then using these characters as a lens to tell us something about everyday people. Initially, signs of disquiet on the street are minor – the electronics don’t seem to work, and no one understands why. As two of the residents, led by the rational Steve (character actor Claude Akins) go to investigate one of the children warns them not to. He suggests that aliens may be responsible and that they may have sent someone on ahead – someone disguised as a human, posing as a family on Maple Street. Steve is the voice of reason, but it’s too late – the seed has already been planted, and the boy has no idea of the effect his words will have.

The show was rarely this experimental with camerawork, nor so pacey, and it really works to the episode’s favour

What follows, compressed into less than 20 minutes of screen time, is the total societal collapse of the street. Baseless suspicions are aired, and accusations thrown out, based on things as innocuous as someone developing a radio or going for walks at night. The atmosphere grows more and more febrile, and the viewing experience is increasingly tense. Sure, there’s a mystery here – what is actually happening? – but what drives the episode is fear about what the crowd will do as the neighbours’ unity starts to shatter.

Night falls, and everyone is scared – the mood only sours even more. As the crowd turn on Steve, he tells them that it’s the accusations that are the problem: “You’re starting something here, that’s what you should be frightened of. As God is my witness, you’re letting something begin here that’s a nightmare.” His words fail to cut through – suspicion gives way to panic, and that gives way to tragedy. The relentless pace refuses to let up, with Dutch angles and extreme close-ups forcing the viewer into a frenzy. The show was rarely this experimental with camerawork, nor so pacey, and it really works to the episode’s favour. Things just build and build, until there’s only one way that they can end – carnage.

prejudices can kill… and suspicion can destroy…

However, the show does offer a twist ending and one that compounds the upsetting narrative. There are aliens, watching from afar, and they are responsible for the electronic problems. Their mission is simply to conduct an experiment, to test what happens when the seeds of conflict are sown, and the results are always the same: “They pick the most dangerous enemy they can find, and it’s themselves.” They fly off in their craft, leaving the neighbourhood to destroy itself.

Serling’s closing narration is worth repeating: “The tools of conquest do not necessarily come with bombs and explosions and fallout. There are weapons that are simply thoughts, attitudes, prejudices… to be found only in the minds of men. For the record, prejudices can kill… and suspicion can destroy… and a thoughtless, frightened search for a scapegoat has a fallout all of its own – for the children and the children yet unborn. And the pity of it is that these things cannot be confined to the Twilight Zone.”

In the 1960s, this episode reflected Cold War anxieties, but its themes of fear, paranoia, suspicion and prejudice sadly continue to ring true even today. This is a timeless tale in the worst possible way, a dark parable that still reflects our society 60 years on, but it’s also a brilliantly made piece of television in its own right. I’d recommend seeking it out, and venturing into the Twilight Zone.