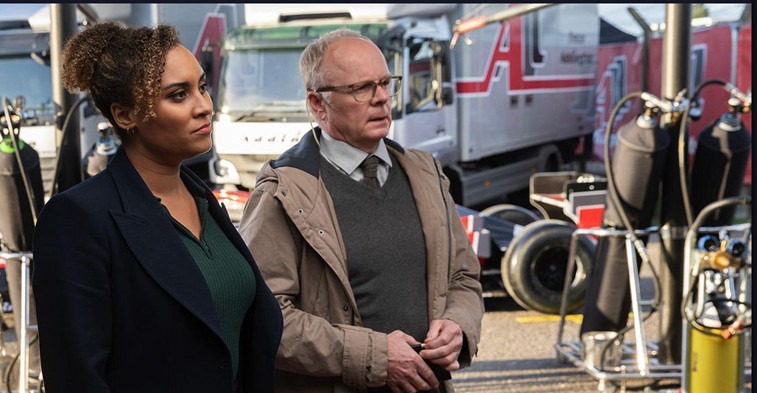 By Reece Goodall
Oct. 12, 2022
Posted in Points of View, TV, TV Series Blogs
After ‘Beldevere’s‘ adventures with linguistics, this instalment sees McDonald & Dodds delve into the world of motorsport, hey, you can’t say it’s not a varied selection of cases. This episode is comparatively a weaker instalment – it offers another example of interesting characters who work alongside the case, but it tries to cram too much in and suffers as a result.

Bath’s most famous motorsport dynasty, the Addingtons, are having a poor run in this year’s Formula 1 world championship, and there is further tragedy after a crash at the Italian Grand Prix. During a test run at the team’s Bath factory, up-and-coming driver Gabriel George (Bluey Robinson) comes in for a sub-3.5-second pit stop and is dead after the tyres have been changed. F1 fan McDonald is called to the investigation and butts heads with team coach Archie Addington (Paul McGann) and manager Phillip Henry (Ben Batt)but she is distracted by the reappearance of a face from her past. Dodds, meanwhile, attempts to figure out exactly how the murder was committed in the first place, cracking a locked-room mystery in an F1 car with the help of one of his own specialities.
Once again, the show looks so stunning, with beautiful production values that really showcase how stunning Bath is. I was a little worried that this episode would struggle to recapture the vibe of F1 – obviously, the budgets are incomparable – but it limits the motorsport aspects effectively so it isn’t distracting. Whatever else you can say about McDonald & Dodds, it’s always a pleasure to look at (ITV is the absolute master at this).
We have a huge cast in comparison to ‘Belvedere’, with some great cast turns. McGann, as always, shines (and he appears not to age either) as the team boss with a fractious relationship with his children – one of whom is played by Daisy Bevan, another great performance. Much of the episode is concerned with expanding McDonald’s backstory, and that means that she spends a lot of time with a face from her past – I won’t ruin who it is in this review, but they’re a very charismatic presence that you’re both intrigued by and want to smack in equal measure.

this cramped space hurts the mystery

After the last episode – I’m sad to report scripting issues – Robert Drummond tries to fit a lot into the episode, with corporate buyouts, family dynamics and McDonald’s backstory all jostling for space in addition to the murder storyline. A little pruning might have improved the flow somewhat because there felt like a lot of characters whose involvement goes nowhere – the very minimal appearance of Naoko Mori as a Japanese businesswoman is a good example. Similarly, one character – initially touted as a key suspect – is interviewed once and then disappears from the episode entirely, a baffling development given his supposed importance to the Addington team.
Worst of all, this cramped space hurts the mystery. There are good clues, but these are clues only for the red herrings and the wrong avenues, with the eventual solution to the murder being both out-of-nowhere and effectively unsolvable. Given that two other potential solutions appear, and ones that feel better integrated into the episode, it’s a shame for the real answer to almost literally be pulled out of a hat. I felt like much of my time was wasted, and that’s not a good place to leave your viewer.

I did enjoy ‘A Billion Beats’, but it felt a little less than the sum of its parts, and that’s a shame. There was potential for the puzzle, but it was ultimately a very unsatisfying resolution, and the busy storyline was just a bit too much going on. The exploration of McDonald’s backstory was enjoyable and really helped develop her character, but I don’t know if it was enough to uplift the episode. It’s a shame, and it’s potentially a worrying omen for the next episode – a hangover from the second series, dropped in the face of Line of Duty and now shifted into this series. I was a little disappointed with the last run, so I’ll keep my fingers crossed that this wasn’t a bad sign.