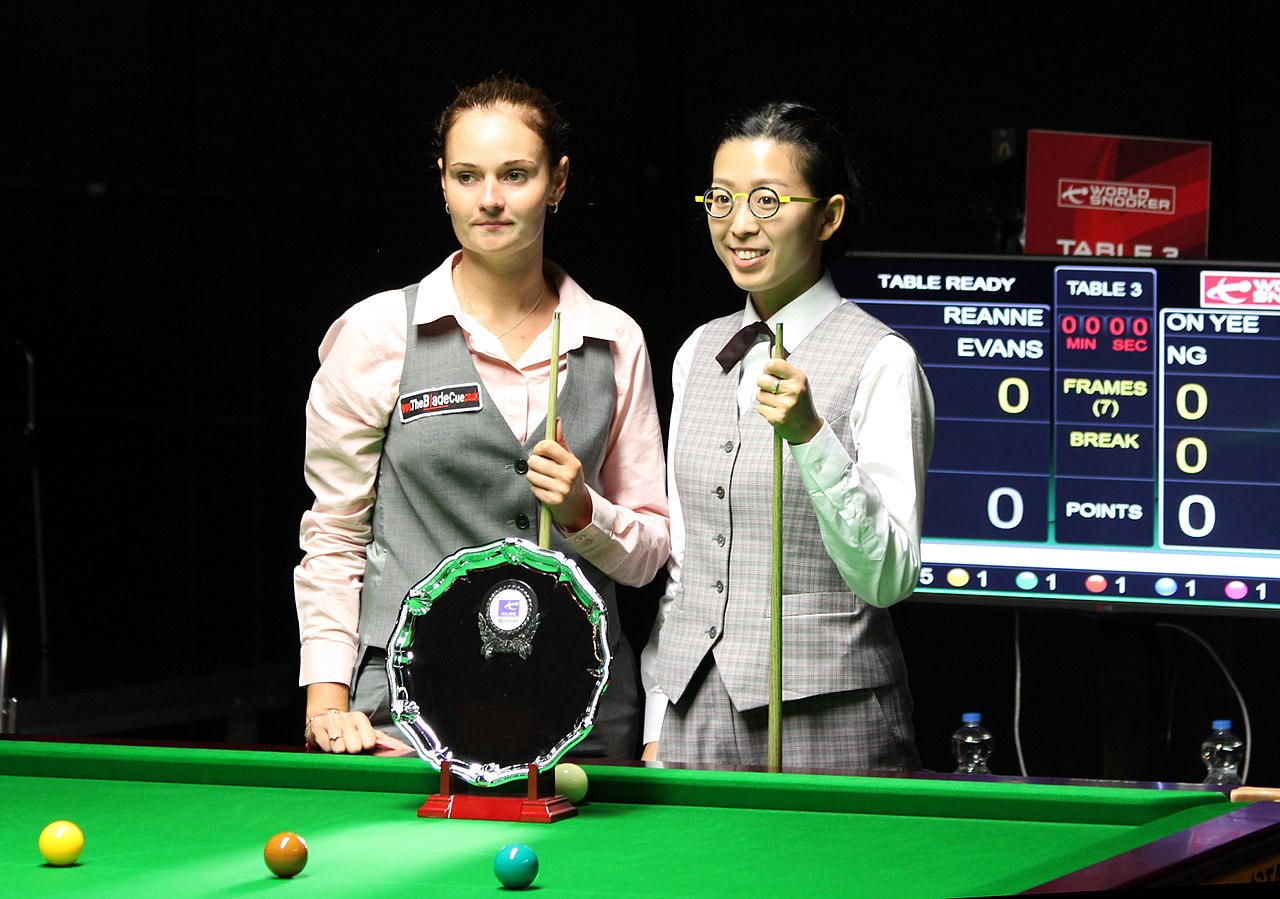 For the first time in more than three decades, snooker is holding a mixed doubles tournament, pitting the best of the women’s and men’s games against each other in a round robin format in what is being touted as a landmark moment for a sport. Here’s a summary of the action on day one.

The first match of the afternoon pitted Ronnie O’Sullivan and Reanne Evans against Judd Trump and Ng On-yee. O’Sullivan and Evans were the pre-tournament favourites, but they struggled to get going, with O’Sullivan in particular noticeably struggling with a format that saw teams take alternative visits to the table. The Trump/On-yee team took the first frame, and then Trump capitalised on an O’Sullivan miss in frame two to win with a break of 75. The third frame was closer, with O’Sullivan and Trump missing opportunities to clench the frame – it would be up to On-yee, who potted the final red and cleared the table to move into a 3-0 lead. A break of 62 in the final frame by Evans, in her first real chance of the match, helped close the deficit 3-1.

The second game saw a team of Mark Selby and Rebecca Kenna face Neil Robertson and Mink Nutchurat. Selby made a 134 break to establish an early lead, and then successive breaks of 64 by the two teams moved the score line to 2-1. It was a scrappy final frame with every player adding a few points to the scoreboard, and then Selby got to clear up all the reds and colours to win 57-46 and also finish on 3-1.

The first match of the evening session pitted O’Sullivan/Evans against Robertson/Nutchurat. Poor position by Evans in the first frame ended her break on 10 – Robertson then came to the table, making a 41 before struggling with the same issue. The reds fell awkwardly, and after a long and scrappy safety battle, it went the way of Robertson/Nutchurat. O’Sullivan took advantage of his first real chance all day to swiftly assemble a 111 break and level. Both Robertson and Evans missed brilliant chances to win in one visit in frame three, but O’Sullivan clinched it with a break of 68. The final frame came down to a long safety battle – Nutchurat wasted the first chance, and then O’Sullivan built a small lead until an unexpected miss on the green. There was more scrapping, but strong play by O’Sullivan and Evans secured a 3-1 victory.

Then it was a battle of the winners, with Trump/On-yee against Selby/Kenna. Selby started with a solid 42 break, before leaving a red over the middle pocket. After everyone struggled to take advantage, Trump made a solid break then missed a tough final pink – Selby took pink and black to steal the first frame. Frame two went tactical, but after a very extended safety battle that came down to the last black, it finally went the way of Trump and On-yee. Selby made a break of 68 quickly in the next frame, leaving the other team needing snookers, and a beautiful pot by Kenna left no doubt that it was frame over. The first chance in the final frame came to Selby – he made a 59 before missing a red, keeping the frame alive, and Trump made a good 22 break despite some awkward balls. On-yee had a chance to steal, and couldn’t take it – Selby punished her and Trump for it, with he and Kenna winning 3-1.

The format of the tournament is that a point is picked up for each frame won, with the top two teams qualifying for the final tomorrow. That means that, as things stand, Selby/Kenna are in the lead with six points. O’Sullivan/Evans have four points, as do Trump/On-yee, but O’Sullivan’s 111 puts his team in second place. Robertson/Nutchurat are currently in last position with two points.

Tomorrow, we’ll see O’Sullivan/Evans against Selby/Kenna, and Trump/On-yee against Robertson/Nutchurat, before the top two teams compete in a best-of-seven match to be the first mixed doubles winners since Steve Davis and Allison Fisher in 1991.