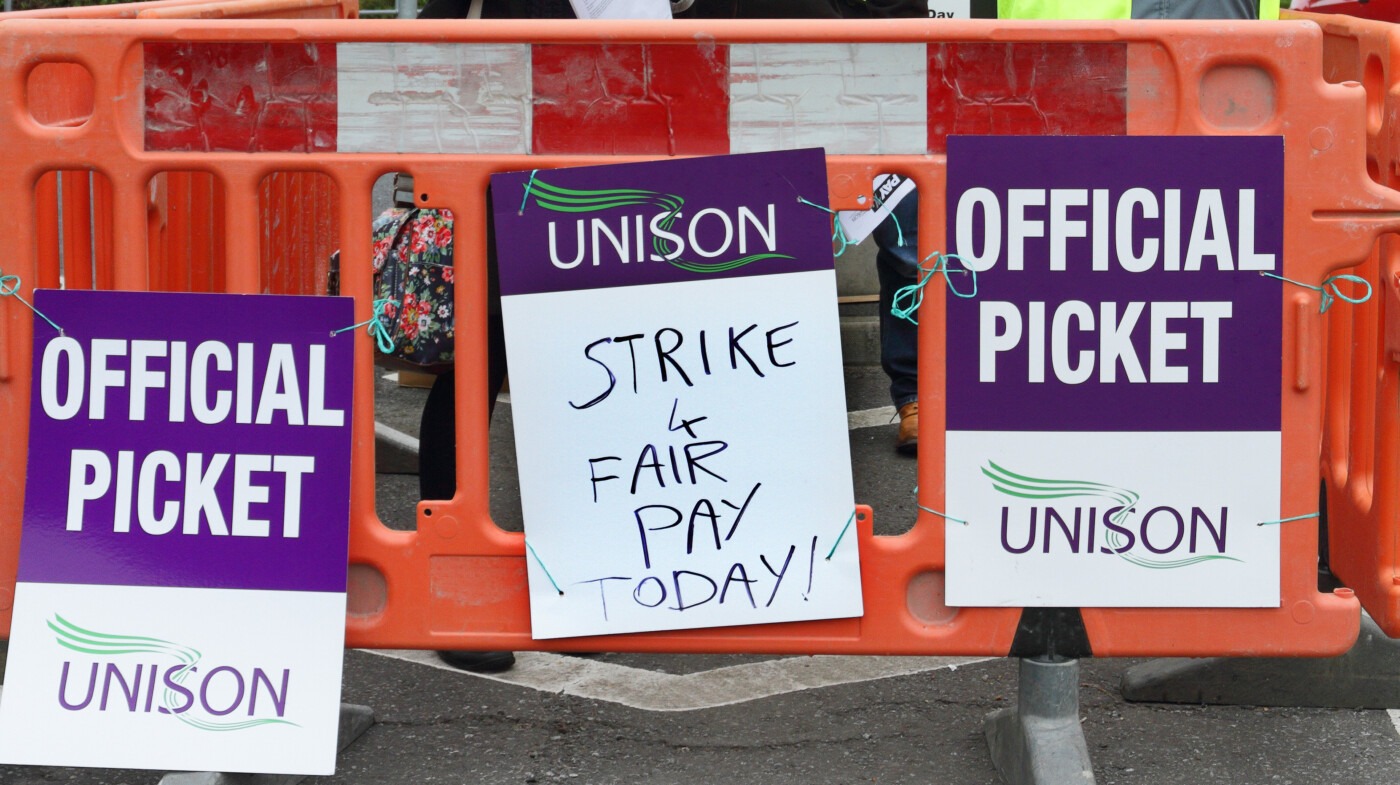 The summer of discontent: why the UK is seeing mass industrial action.

Transport, education, healthcare, and the civil service are all fundamental sectors for the functioning of society. These sectors — or rather the workers within them — fill supermarket shelves, administer vaccines into our arms, and maintain our communities, forming the foundations of what we recognise as modern civil society.

They are also all sectors that have been plighted by the immense industrial action we have seen this summer. Rail workers, postal workers, dock workers, nurses, barristers, educators, waste collectors: if they haven’t already taken to the picket lines, then ballots for industrial action are likely to be in place. As relentless waves of strikes from all corners of UK industry have washed over the country, commentators have been quick to claim this summer as having been a summer of discontent.

The winter of discontent is largely considered a focal point of the last half-century.

This new media buzzword, which draws upon the winter of discontent, acts as both a tribute to and a warning against the actions and consequences of the extensive industrial action seen in 1978-79. The winter of discontent is largely considered a focal point of the last half-century, and certainly one steeped in significance for recent British history. 4.6 million people took part in the strikes and a total of almost 30m working days were lost to the industrial action — the greatest annual total to be lost since the 1920s.

These strikes, which were prompted by Labour PM Jim Callaghan’s attempts to toughen the social contract that had existed between the unions and the government since 1974, and which committed the Labour Party to introduce policies the unions desired, were largely successful. Many industries warranted wage rises that at least matched, and much more often exceeded, the level of inflation – arguably to spite the 5% limit on wage rises that Callaghan had instated while inflation was 8%. For example, the efforts of more than 50,000 workers at the carmaker Ford, which spearheaded the start of strike action, were rewarded with a 17% wage rise. Elsewhere, the Hull truckers, whose powerful five-week strike bought the local economy largely under the control of the union activists, were rewarded with a 22% wage rise.

Such extensive and expansive disruption, expectedly, saw the economy grind to a halt, and when combined with an unexpectedly bitter winter, attitudes in the general public became frosty. The Labour government floundered and faded, and although wages rose, so too did the Thatcher administration, marking a dramatic shift in the political landscape.

As Blair noted in 1997, the UK became home to “the most restrictive union laws in the Western world.”

The constant dialogue that had existed between unions and the government, as a result of the social contract, ended. Caricatures of scheming union bosses that wanted to undermine the state became synonymous with industrial action resulting in the long-term marginalisation of workers’ interests. Strikes would no longer be a part of everyday economic and political life, with union officials falling from their place of national recognition, nor would they take the almost revolutionary stance that they once did during the winter of discontent. As Blair noted in 1997, the UK became home to “the most restrictive union laws in the Western world.”

Yet, we have seen, for the first time in years, mass collective action. RMT boss, Mick Lynch, has become the ‘face of the resistance’ through his triumphs against broadcasters and politicians. Lynch has warned that should Liz Truss get elected and carry out her anti-union policies “there will be the biggest resistance mounted by the entire trade union movement, rivalling the general strike of 1926, the suffragettes and Chartism.” Public support is also abnormally high: Savanta ComRes found that 38% of Conservative voters considered the disruptive rail strikes to be justified, and 72% of under-35s backed the industrial action.

Despite the action being just a spectre of what it once might have been, after being effectively neutered of its power by Conservative governments, with picket lines looking timid and sparse, and the government remaining firm (even in the dying embers of Johnson’s government was a law passed allowing agency workers to replace striking workers), the presence of this industrial action is unusual. Much more unusual is the fact that this industrial action has diffused across industries in such a diverse manner, accurately evoking the feeling that this has, in fact, been a summer of discontent.

A forecast from the investment bank Citi found that UK inflation could rise to 18% early next year.

Enough is enough. Not just the public sentiment that has arisen in the last few months, but the name of a new campaign that captures the heart of the recent rise in industrial action. Spearheaded by trade unions, MPs, and community organisations, the new campaign highlights just how the cost of living crisis is affecting communities and workers. With the campaign garnering some 300,000 sign-ups within a handful of days, and demand being so high that the website crashed, the cost of living crisis is undoubtedly the catalyst behind the summer of discontent.

At the top of the campaign’s list of five demands is a rise in the real wage. Real wages reflect the power of an employee’s pay after accounting for inflation, and in the second quarter of this year, the real wage in the UK fell at the fastest rate for at least 20 years. Data from the Office for National Statistics showed that real wages fell by 3%, meaning that despite average pay rising by 4.7% for the same fiscal quarter, the cost of living is outpacing real wage growth. It is here that workers’ concerns are arising — they are continuing to work the same amount of hours, and unemployment figures are remaining low at 3.8% but they are finding that their efforts are not being rewarded in the same way (at least not in real terms).

Propelling this fall in the real wage is inflation. Inflation, which is the percentage change in the price index (how much prices increase by), hit 10.1% in July — five times the target inflation rate of 2% the Bank of England aims to maintain. This rapid increase marks a 40-year high, and in October it is predicted to reach 13%. Worse still, a forecast from the investment bank Citi found that UK inflation could rise to 18% early next year.

These stratospheric levels of inflation are particularly affecting energy prices. UK households are going to be hit by an 80% rise in energy bills in October. Energy regulator Ofgem has said that the average electricity bill in Britain will rise from £1,971 to £3,549 a year from October. Forecasts into next spring have warned against bills reaching £6,600.

As this crisis grows ever closer to catastrophic levels for workers and households across the country, the government seems more absent.

While these inflationary spirals are caused by external factors (notably the Russia-Ukraine war, which saw Russia slash its energy supply to the EU by a fifth of its capacity following the impositions of sanctions on Russia), it is at home that the effects are being most keenly felt. Chancellor Nadhim Zahawi has warned that even Britons earning £45,000 a year, £15,400 more than the average yearly UK salary, will need government aid to help pay their bills.

As more households begin to strain under the burden of this increased financial pressure, it is likely that the paradox of thrift will begin to operate. This economic theory, that is of course not without its limitations, suggests that as households come under financial strain they will begin to save more, thus causing a reduction in demand and having larger impacts on output and earnings in wider society. This is likely to have a great effect on public life, with businesses losing income and unable to keep up with their costs. Job losses and business closures loom on the horizon.

Yet, another paradox is also in operation: as this crisis grows ever closer to catastrophic levels for workers and households across the country, the government seems more absent. Boris Johnson has emphasised that he will not be making any emergency decisions, and is enjoying his second foreign holiday of the summer. Meanwhile, Rishi Sunak and Liz Truss are promising either VAT reductions on energy bills or tax cuts, but this help would not provide workers with the immediate help that they feel is necessary. Unison assistant general secretary, Jon Richards, said: “The government and those angling to be the next PM appear indifferent to the plight of those struggling to make ends meet.”

The perilous levels of inflation, combined with a lack of government action has engendered a living nightmare for working people across the country. People rightly believe that enough is enough, and have taken to reviving the disruptive spirit of the winter of discontent in an attempt to get their plight heard. While we have certainly seen a summer of discontent, the unusual re-emergence of the UK’s mass industrial action is likely to rage on until workers are given a suitable solution to the crisis.