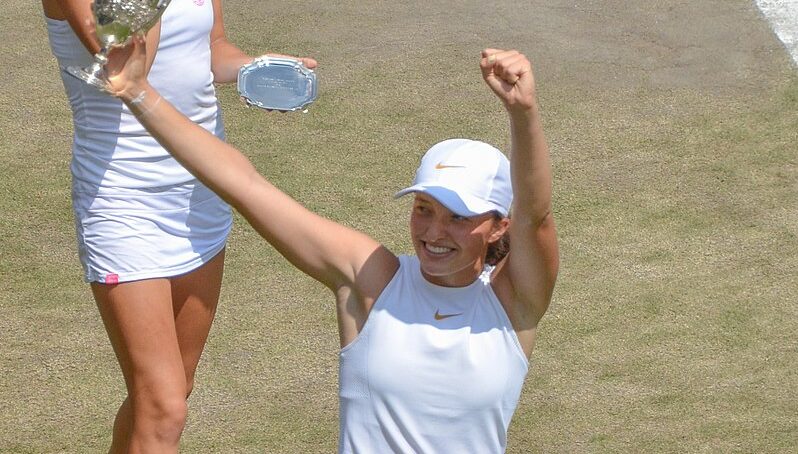 Iga Swiatek has won the women’s singles title at the US Open, defeating Ons Jabeur in straight sets 6-2 7-6 (7-5).

The world number one demonstrated why she holds the position at the top of the game, capping off a dominant season with an impressive and assured victory over her Tunisian opponent.

It is her third Grand Slam title, after winning in the French Open in 2020 and in June this year.

In her nine previous finals, six of which came this year, Swiatek won without dropping a set, and she was clearly confident as the match began.

The Polish player was swinging freely, barely missing a first serve making every return, while Jabeur struggled to get started, winning just two points in the first three games. It was a slow start for the Tunisian, and one that was punished in a first set that was surprisingly one-sided – it took Swiatek just 30 minutes to clinch the opener.

Come the second set, Jabeur’s serving improved, and there was a noticeable dip in the world number one’s level. Swiatek quickly established a 3-0 lead, but she was unable to convert either of two break points for a 4-0 lead, and that gave Jabeur the opportunity to level at 4-4. She saved three break points to prevent Jabeur taking the lead and was soon presented with a championship point. Swiatek missed the chance, sending a backhand long, but she regained her composure in the tie-break – Jabeur hit a forehand long on the second championship point, and the tournament was over.

The most important thing is accepting it, learning from the finals that I lost… I am sure I’m going to be in the final again

After the match, Swiatek said: “I’m proud that I have much more solutions and options on court than I had before tennis-wise, but also mentally. I’m using these skills pretty well. I’m really proud of that because I just know how it feels to not have ideas on court, not have anything you can change to make the match better. Right now it’s been a long time since I didn’t have any idea.”

Jabeur said: “Iga didn’t make it easy for me. She deserved to win. Winning or losing is part of tennis. I struggled to win my first WTA title. It took me time. So I believe this [winning a major] will take me time.

“The most important thing is accepting it, learning from the finals that I lost. Definitely I’m not someone that’s going to give up. I am sure I’m going to be in the final again. I will try my best to win it.”

In the women’s draw, there was one major headline – the retirement of Serena Williams. And it is perhaps unsurprising that, as the sport loses a superstar of the women’s game, it is potentially eyeing up a new one in Swiatek. With this victory, Swiatek has become the first person to win seven titles in the same year since Williams eight years prior, and she established a 37-match winning streak earlier in the year that was a showcase of what a force she has become. She has demonstrated the champion instinct, and all eyes will be on her next season to see where her career goes next.