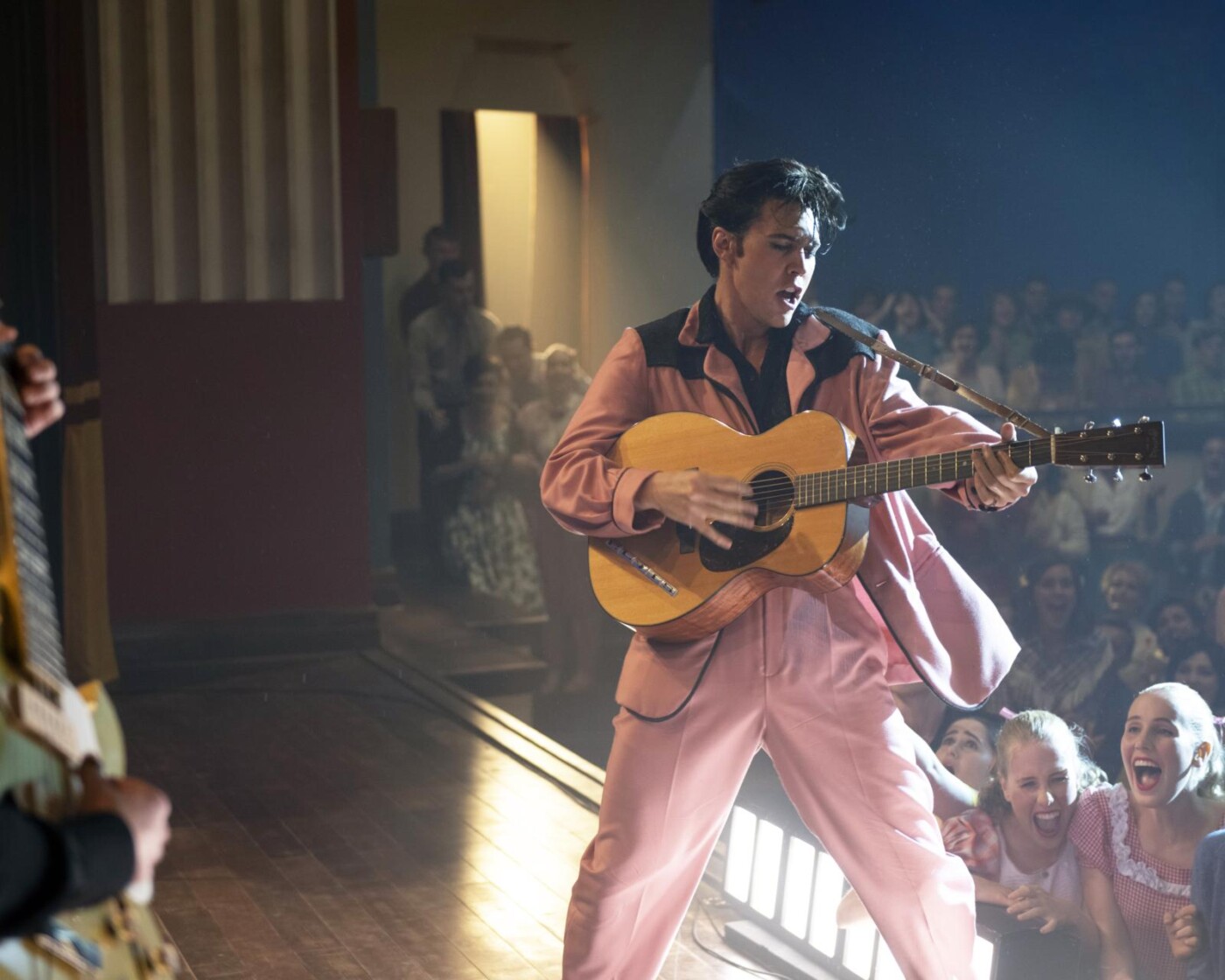 Elvis Presley- The wiggling, slick, and suave singing sensation from the Southern heartlands of America. But beyond the flashing lights and screams of adoring fans, behind the curtain, and under the garish layers of rhinestone-encrusted capes, who is Elvis Presley? You’d be forgiven for expecting to find out in Australian director, Baz Luhrmann’s, new biopic on the King. While this whistle-stop dramatisation of Elvis’ life provides yet more embellishment to the romantic mystery of rockabilly Presley, Luhrmann also delivers enough cunning to slightly unveil some of the shadows that haunted the King’s life.

Following the linear, and frankly dull storyboard of any biopic, we are submerged into the life of Elvis from cradle-to-grave. We witness Elvis (Austin Butler) as his juvenile self, scurrying around the forgotten wasteland of Southern America in search of his superpower. No sooner is his musical superpower discovered, ready to help Elvis fly, when shadowy narrator Colonel Tom Parker (Tom Hanks) emerges from a hall of mirrors, ready to both spur on and suppress his destiny. From here, the fairy tale begins. So too does the cultural revolution.

Rather than unveil the life of Elvis with all its blemishes, we understandably, receive another idealistic glimpse at the idol’s life

The musical maverick is displayed in his all-singing, all-dancing glory. Record deals are signed, performances give people a “taste of forbidden fruit,” and sub-par Hollywood films are made. We truly relive the cultural revolution Presley’s pelvis had on America, defying the clutch of Conservatism across the nation. Yet we can also see how in this retelling of Elvis’ life, he is not the King, but instead the princess locked away in their Vegas tower, controlled by his evil stepmother, the parasitic Colonel.

Given Colonel Tom Parker’s actual nature, as the domineering manager who consistently neutered Elvis’ potential threat while wheedling away hordes of wealth, combined with the omnipotent role in the film that Luhrmann carved out for him, the fog surrounding Luhrmann’s decision to not delve too deeply into Presley’s past is lifted. To Parker and the masses that adored Elvis, he was a commodity to be sold and bought. A flashy circus act that could never become the ringleader. Through Parker’s narration he is careful not to remove the smoke and mirrors that made Elvis, Elvis. After all, for Parker to concentrate on Elvis’ problematic side, such as his grooming of a fourteen-year-old Priscilla (Elvis was 24), he would have ascertained career suicide. Thus, rather than unveil the life of Elvis with all its blemishes, we understandably, receive another idealistic glimpse at the idol’s life.

Known for his opera-style extravagance in films such as Romeo + Juliet, and The Great Gatsby, Elvis is true to Luhrmann’s dizzying style

Yet Luhrmann does not dance so smoothly over every topic. He makes an effort to chronicle and credit the role of the Black community in Elvis’ life. Growing up listening to gospel music in churches, and frequenting blues bars on Beale Street, Presley’s sound, though heralded as unique and revolutionary, was an amalgamation of the so-called ‘black music’ he had grown up listening to. And the film appropriately highlights this influence. He is seen as opening the door to mass appreciation of ‘black music’, and his friendship with black icons such as B.B. King during the Civil Rights movement is reflected.

And, of course, this is all depicted in the frenzied ‘more is more’ mind of Luhrmann, who would have been the only director capable of capturing, to the point of challenging, the excess glitz of Vegas and the King. “If I can’t move, I can’t sing,” drawls Elvis, reproducing the sentiment that must have been rocketing around Luhrmann’s mind as he drenched himself in the supersonic world of the King. Known for his opera-style extravagance in films such as Romeo + Juliet, and The Great Gatsby, Elvis is true to Luhrmann’s dizzying style. Intense jewel colours strike against black and white tones, the use of authentic camera lenses from the period submerge you into the fifties, and the soundtrack’s balance of modern hip-hop, courtesy of Doja Cat, and fifties blues create a staggeringly unique cinematic experience.

From the micro-expressions to brash dance moves, and even down to his singing, Butler is the King

Amplifying the experience, is Austin Butler’s stellar performance as the star himself. Authentic footage propped against Butler’s performance is indistinguishable. From the micro-expressions to brash dance moves, and even down to his singing, Butler is the King. The self-sacrifice, to such an extent, is admirable and meritorious- after seeing Elvis one can understand why Butler is continuing to speak in Presley’s infamous drawl. Butler is bound to be rewarded spectacularly come award season.

Elvis is an epic of the big screen. While many may say that it does not delve deeply enough into the shadowy truths of the life of Elvis Presley, the legacy of the King, as it was lived, it certainly delivered. This is a film on fire.