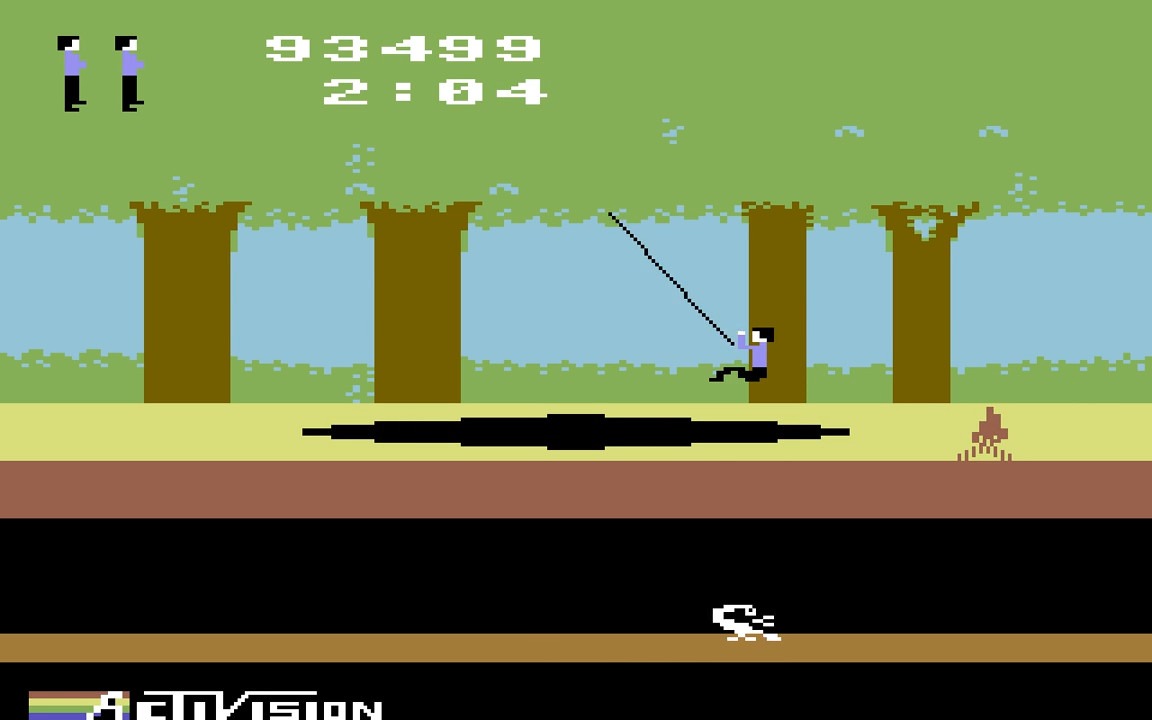 Concept to Console: the development of ‘Pitfall!’

We love explorers – there’s a reason that we’re obsessed with tales of historic adventurers and figures such as Indiana Jones, and that’s because there’s something inherently romantic and exciting about the notion of exploring. Unsurprisingly, video games have also featured explorers and adventurers, with Lara Croft and Nathan Drake two of the most high-profile examples. But you could look further back, to a game often considered one of the greatest ever made. That game – Pitfall! on the Atari 2600.

In a November 2003 interview with Edge, Crane discussed the process of creating the game. He said that, in 1979, he had developed a technique which would display a realistic running man and that, in 1982, he was still searching for a suitable game in which he could use it: “I sat down with a blank sheet of paper and drew a stick figure in the centre. I said, ‘Okay, I have a little running man and let’s put him on a path [two more lines drawn on the paper]. Where is the path? Let’s put it in a jungle [draw some trees]. Why is he running [draw treasures to collect, enemies to avoid, etc.]?’ And Pitfall! was born. This entire process took about ten minutes. About 1,000 hours of programming later, the game was complete.”

Pitfall! was a huge success, both critically and commercially – Danny Goodman of Creative Computing Video & Arcade Games said it was “a standout” and a “very original cartridge no VCS should be without”. It sold around four million units on the Atari 2600, the console’s fourth best-selling game (behind titans Pac-Man, Space Invaders and Donkey Kong), and it was the top video game on the Billboard charts for more than a year. This was linked to a great advertising campaign, in which anyone who scored over 20,000 points in the game could send picture proof to Activision to receive a Pitfall Harry Explorer Club patch. There was also a popular TV commercial, which featured – in his first TV role – Jack Black.

If you’re a fan of adventure games, you owe a debt of thanks to David Crane and Pitfall Harry

Although it couldn’t be known at the time, Pitfall! would essentially function as the prototype for the side-scrolling platform game, a genre that would dominate 8- and 16-bit systems. And some of those future games would be sequels. Crane developed Pitfall II: Lost Caverns for the Atari 2600 – it was published in 1984, one of the last major games for the system, although interest in it was hurt by the video game crash the previous year. It’s a technically-impressive game with many new additions, including swimmable rivers and balloons for travelling between locations. It received an arcade remake by Sega, and a 1987 NES reimagining as Super Pitfall. It also featured characters from the quickly-cancelled Pitfall! animation.

Further games would follow – Pitfall: The Mayan Adventure was released in 1994 for the SNES and Sega Genesis, to mixed reviews. The 1998 PlayStation game Pitfall 3D: Beyond the Jungle was notable for casting Bruce Campbell as the voice of Pitfall Harry Jr, if little else. The Lost Expedition, the final Pitfall! game, was released in 2004 for PS2, GameCube and Xbox to mixed reviews – a 2008 Wii port, however, was not well received at all. All of these games featured at least one of the first two Pitfall! games as extras, highlighted that the core formula had barely evolved (interestingly, they’re also extras on a number of Call of Duty instalments).

There was one more day in the sun for the franchise, however. In 2012, Activision released Pitfall! for iOS and Android, the latter version to coincide with the supposed Mayan apocalypse. The style of the game is similar to Temple Run, and Crane hoped to fund a spiritual successor via Kickstarter. His campaign for Jungleventure hoped to raise $900,000, but it only made around 3% of that, with many comments that Crane wanted too much money.

Pitfall! was the right game at the right moment, and although it failed to really evolve into the modern era of gaming, its influence cannot be understated. If you’re a fan of adventure games, you owe a debt of thanks to David Crane and Pitfall Harry.