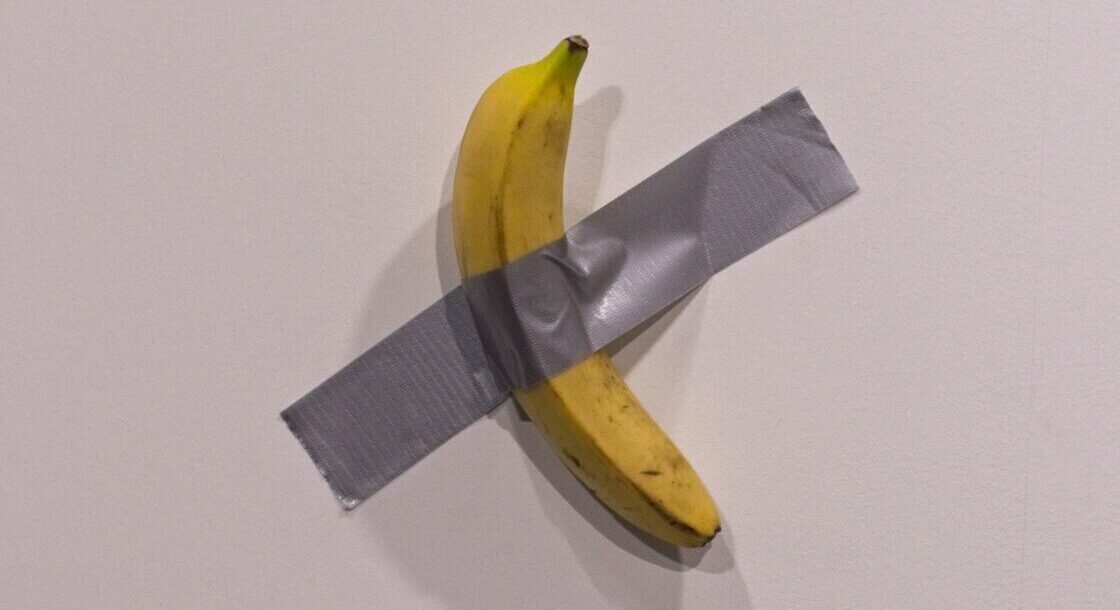 The battle of the fruits: What does Cattelan’s ‘Comedian’ highlight about the subjectivity of art

In 2019, Italian artist Maurizio Cattelan made headlines with his new artwork, Comedian. The piece, a banana taped to a wall, was sold for $120,000, and it was widely mocked by critics and audiences alike as they argued it lacked any real degree of artistic merit. If you thought this was the last time that Comedian would feature in the news, you’d be wrong as Cattelan is facing legal action over whether he copied another artist’s work –  a copyright case that invites questions as to the very classifications surrounding art.

The American artist, Joe Morford, produced his own work, Banana & Orange, a couple of decades earlier – both works feature a taped banana. Whilst Morford also taped an orange to another panel, he instead stated: “I did this in 2000. But some dude steals my junk and pimps it for 120K+ in 2019. Plagiarism…?” Cattelan argued that his buyers only purchased instructions on installing the banana and that the artworks are dissimilar because Morford’s fruits were synthetic. However, the case will proceed because “the alleged infringement of Morford’s banana is sufficient, quantitatively and qualitatively, to state a claim”.

Can a banana taped to a wall be art?

Michael Daley, director of ArtWatch UK, the art world watchdog, said: “Lord Goodman famously advised that the best defence against a charge of theft is a flat denial – ‘I did not take the apple’ – and that anything added – ‘I do not like apples’, ‘I had just eaten’ – weakens the case. Cattelan’s lawyers protest that the original taped banana was accompanied by a taped orange and Cattelan adds – possibly with a touch of sour grapes? – that the original taped banana was synthetic, not real. Judge Scola rightly sees that while taping real or synthetic fruit to walls singly or in pairs may be of minuscule artistic value, the law is the law. This is a very ripe dispute indeed.”

At the core of the case, there is a question that has hung over the art world for centuries – what is originality? The crux of the case is that there are two major differences between the works – that Morford’s doesn’t feature real fruit, and that his work also boasts a banana. Although Judge Scola Jr has confirmed that Morford cannot post a copyright claim over the idea, he clearly believes that there is enough similarity between the two works to justify allowing the case to proceed. It’s less a matter of whether Morford originated the concept of taping fruit to a wall, something that would be nigh-on impossible to prove than it is whether Cattelan’s piece infringed upon Morford’s.

As Scola Jr notes, “there are only so many choices an artist can make in colours, positioning and angling when expressing the idea of a banana taped to a wall”, adding: “In both works, a single piece of silver duct tape runs upward from left to right at an angle, affixing a centred yellow banana, angled downward left to right, against a wall. In both works, the banana and the duct tape intersect at roughly the midpoints of each, although the duct tape is less centred on the banana in Morford’s work than in Comedian.”

Jim Jarmusch famously said: “Nothing is original. Steal from anywhere that resonates with inspiration or fuels your imagination.” There is an implicit idea that art can now only be good if it is original, ground-breaking, but nothing ever is, not really. The real question at the heart of this case is how close you can get to another work before that unoriginality becomes overpowering. I’m not going to claim that Cattelan stole the idea from Morford, but I think he’ll have a very hard time in court arguing that two bananas taped to a wall are somehow radically different.