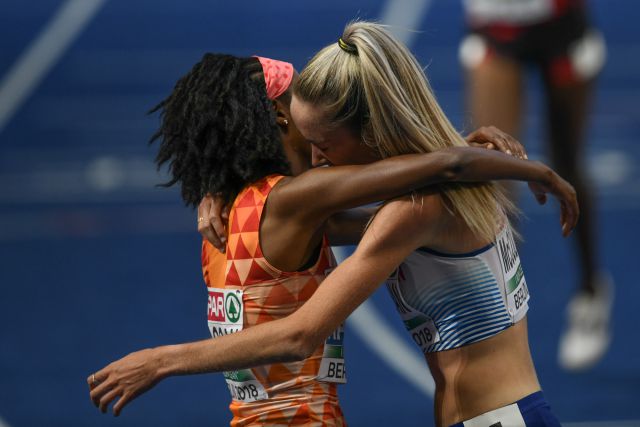 Halfway through the Birmingham 2022 Commonwealth Games, and there was a whole host of headlines – established names doing what they do best, Australia picking up swimming golds, and even a daughter following in her mother’s footsteps.

We saw the men’s and women’s mountain bike cross-country events today. In the former event, New Zealand’s Sam Gaze defended his title, moving away from his compatriot Ben Oliver with two laps to go to take the gold with a lead of more than 30 seconds. World champion Evie Richards of England was dominant in the women’s event, establishing a lead early and finishing more than 47 seconds clear of Australia’s Zoe Cuthbert in silver position.

There was one lawn bowls gold up for grabs today, in the B6-8 para women’s pairs event, and it ultimately went to Scotland. Rosemary Lenton and Pauline Wilson overcame their Australian opponents 17-5 to storm to victory.

Emily Campbell of England set a new Games record and a career-best in the women’s +87kg, lifting a total of 286kg to take the gold. Cameroon’s Junior Periclex Ngadja Nyabeyeu took a narrow victory in the men’s 109kg with a total lift of 361kg, while Pakistan’s Muhammad Nooh Dastgir Butt won gold in the +109kg event with a total lift of 405kg.

In the final pool event, the women’s 4x100m medley relay, it was only fitting that the last gold went to Australia

The judo medals began with a gold for England’s Jamal Petgrave in the -90kg final. Scotland’s Sarah Adlington sealed an ippon victory in the women’s +78kg final, the first Scottish judoka to win twice at the Games, while England’s Emma Reid won the -78kg gold. England picked up two bronzes in the men’s -100kg event, with Canada picking up the silver and gold, and Canada’s Marc Deschenes secured gold in the +100kg after a hard-fought final with New Zealand’s Kody Andrews.

Gina Kennedy performed incredibly in the women’s singles squash, defeating Hollie Naughton 4-1 to win gold for England. New Zealand claimed the gold in the men’s event, with Paul Coll coming twice from behind to win 3-2 over Wales’ Joel Makin.

Scotland’s Eilish McColgan set a new Games record of 30 minutes 48.60 seconds to win the women’s 10,000m, crying as she emulated her mother’s success in the event in 1986 and 1990, while New Zealand’s Hamish Kerr took the men’s high jump gold. Canada won the women’ shotput gold after Sarah Mitton’s 19.03m throw, Wales took gold in the men’s F42-44 and F61-64 discus, and then Katarina Johnson-Thompson won her first heptathlon for three years to retain her Commonwealth title. Kenya’s Ferdinard Omanyala cinched the men’s 100m in 10.02, and Australia’s Evan O’Hanlon took the men’s T37/38 100m title. England’s Daryll Neita was awarded bronze in the women’s 100m, while Jamaica’s Elaine Thompson-Herah did as she does to storm to the gold.

It was the final night of swimming, and Sam Short took the men’s 1,500m title in 14:48.54. It was painfully close in the women’s 50m backstroke, with Canada’s Kylie Masse ultimately taking home the gold – there was another Canadian gold for Nicholas Bennett in the 200m freestyle S14. England had a 1-2 in the 50m freestyle with Ben Proud and Lewis Burras taking the top two medals, and Northern Ireland collected their first gold of the Games with Bethany Firth’s win in the women’s 200m freestyle S14. Duncan Scott and Tom Dean topped the table in the men’s 200m IM, and an inevitable Australian gold came courtesy of Ariarne Titmus in the 400m freestyle. England won the men’s 4x100m medley relay, and Australia claimed the mixed title. In the final pool event, the women’s 4x100m medley relay, it was only fitting that the last gold went to Australia.