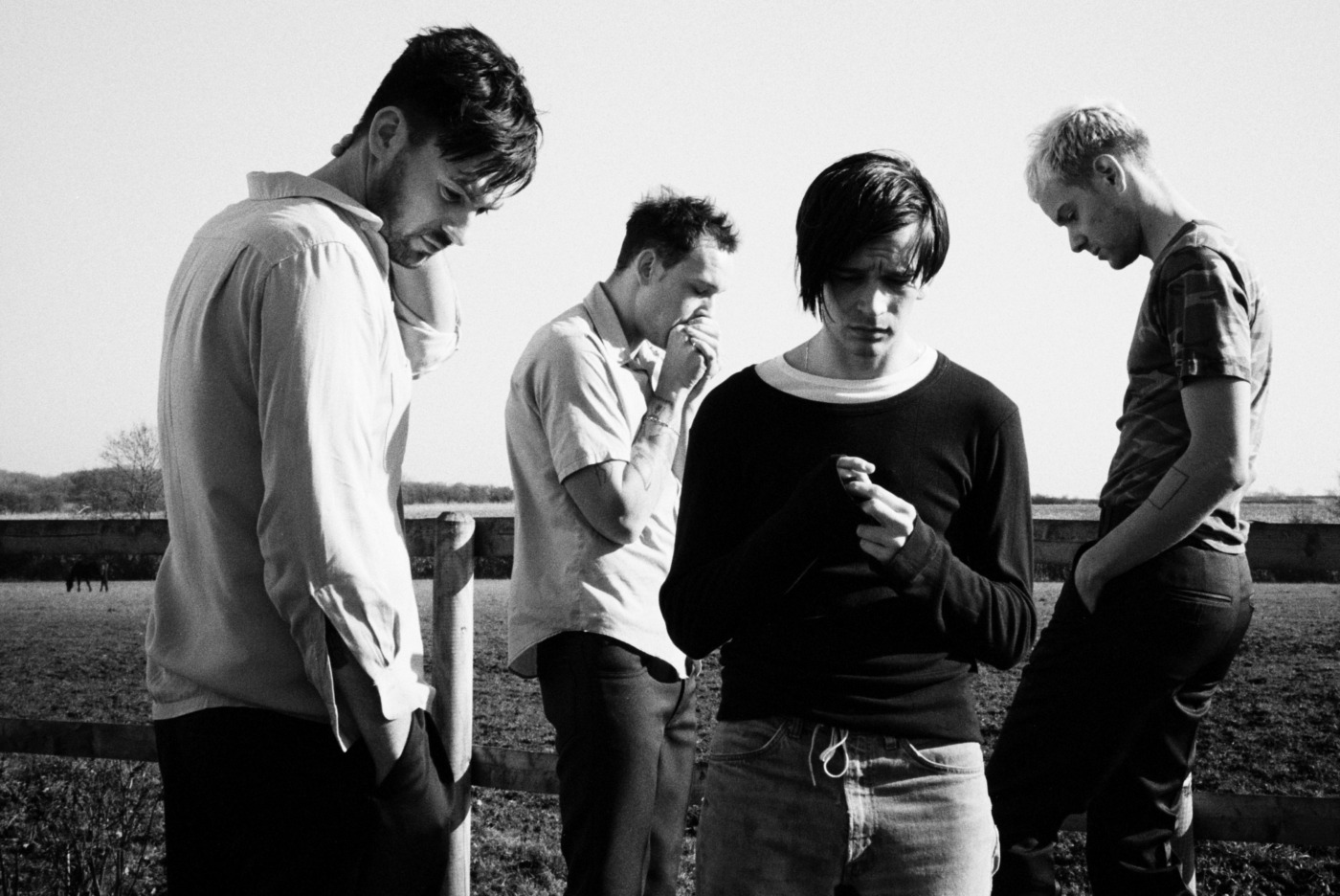 By Sophie Flint Vázquez
Jul. 10, 2022
Posted in Music, The Music That Made Me

I wanted to get into them, of course. They were cool. What’s more, at the time they had the most beautiful Instagram feed I had ever seen — rose-tinted pages of poetry and pastel-hued roses and birds filled their page. The band themselves looked effortlessly beautiful: refined and classy yet relatable. There was a picture of them glancing into a grand, weathered mirror amongst vintage furniture; another equally aesthetically-pleasing post urged people to vote in the 2016 US presidential election; and of course, there was one of their famous pink neon rectangle sign with “The 1975” in the middle — the cover for their sophomore album, I Like it When You Sleep, For You Are So Beautiful Yet So Unaware of It. They were just out of reach enough to maintain the allure but human enough to seem ‘real’. But the quality of their music did not live up to that of their painstakingly curated image. How people genuinely enjoyed listening to them became a mystery to me — surely they were just pretending?

However, skip forward to a year later and somehow, they’d become one of my favourite bands. The radical shift first came when I started listening to ‘Chocolate’ ‘properly’. The song, originally released on their 2013 EP Music For Cars, is an upbeat pop-rock track featuring sharp guitar paired with rapid-fire vocals from lead singer and frontman Matty Healy. The song was alright; it was fun and catchy, and it soon found a way to slide its way onto my playlists. After a year of claiming that The 1975 were incredibly overrated, there was a reluctant moment of acceptance that they might have one good song.

However, the real change came when I decided to look up the lyrics to ‘Chocolate’, none of which I understood. As it so happened, they were not just singing unidentifiable Manchurian gibberish, but actual lyrics. And not just any lyrics, but lyrics on the relationship between drug-taking teenagers and the police. And for whatever reason, 14-year-old me was enthralled by this. Determined to find artists that wrote ‘meaningful lyrics’, I delved deeper into their discography and found that ‘Chocolate’ was actually one of their lyrically-weaker songs. With lines such as “hyper politicised sexual trysts/ Oh I think my boyfriend’s a nihilist” (‘Paris’) and “caught up in fashion, Karcrashian panache/ And a bag of bash for passion” (‘Love Me’), I had found lyrics unlike those I had ever come across before. They were clever, funny, tongue-twisters commenting on society, relationships, drugs, and everything in between.

However, what I failed to tell people was that I hardly knew what any of them meant. So with the Genius app in front of me, I painstakingly combed through every lyric they had ever written, reading what people had to say about them. Finally, I began to piece together their discography. Like a giant, constantly-evolving patchwork, The 1975 constantly references their past songs. An example of this is the lyrics of the 2016 track ‘Loving Someone’. The line “we shouldn’t have people afloat/ If it was safer on the ground, we wouldn’t be on a boat” references the 2013 track ‘Talk!’: “I’d be an anchor but I’m scared you’d drown/ It’s safer on the ground”. It is impossible to fully understand their songs without being familiar with all their material, unreleased songs and all. Getting myself stuck on their lyrics soon provided hours of entertainment as I picked apart each line to uncover new and even more far-fetched interpretations.

What’s more, they had a habit of name-dropping philosophers, artists, and authors. In my eyes, I had struck gold! The 1975’s were the furthest thing from mainstream breakup lyrics or love songs I could find. Reflecting on this now, I realise most of their songs are in some way or another about love, albeit a much more toxic, skewed, and drug-fuelled love than that which is portrayed in upbeat top-40-sounding pop tunes. Not only that, but my claim that they weren’t mainstream was soon shut down. The 1975 had had numerous chart-topping singles. However, having grown up in Spain where they weren’t nearly as popular, I was blissfully unaware of their popularity in their home country. In the eyes of 15-year-old me, that was all that mattered — they were my little secret band and they were different. Granted, I still didn’t like their music. I did, however, make a monumental effort to power through their songs just listen to their lyrics. A few months go by and by this point, I had reached a point of no return. And perhaps it was through some sick Stockholm Syndrome that only then did I begin to enjoy their music.

I never fully got to enjoy my teenage years, but I did have The 1975 as the soundtrack to them

I was soon hungry for more. In my attempt to understand the band better, I began to take an interest in the same art, poetry, philosophy, and literature that heavily influenced their music. Their music introduced me to the Beat movement, a counterculture literary genre that developed in the United States during the 1950s. When Healy sang, “I quote On the Road like a twat” on ‘Change of Heart’, I ran to my nearest bookshop and, lo and behold, read Jack Kerouac’s On the Road, a seminal piece of Beat literature. And while I was severely disappointed, I had not been defeated. Knowing the movement had heavily inspired the band, I began to explore other Beat literature — primarily William S. Burroughs and Allen Ginsberg. They are now some of my favourite literary figures. It was only later that I discovered Healy has a Burroughs tattoo and named his dog Allen after Ginsberg. Similarly, when I studied French philosopher Guy Debord’s Society of the Spectacle in my first year of university, I recognised him from the lyric “even Guy Debord needed spectacles” in ‘Loving Someone’. It became a game of sorts — they’d mention some cultural figure, and I would go out and research them.

When the band is not namedropping philosophers, The 1975 excel at capturing the feeling of being young, or what Healy refers to as “the apocalyptic feeling of being a teenager in a major key”. Having had a rough time during my teenage years, I feel like I missed out on a lot of quintessential teenage experiences. Their song ‘Robbers’, captures freedom and nostalgia in a way I had previously not experienced. I saw the band live at 16 (after queuing for over ten hours in the scorching 40º Spanish summer sun), and I hadn’t understood what Healy meant when he said “this one is for 16-year-old you” just before they played ‘Robbers’. But now, I get it. The feeling of screaming the lyrics to ‘Robbers’ is the same one as feeling infinite on a night out, it is the feeling of having your entire life in front of you. It is the feeling of having nothing planned, nothing waiting for you on the other side, but whatever happens, you know it will be good. I never fully got to enjoy my teenage years, but I did have The 1975 as the soundtrack to them. And if I had not felt the need to find refuge in music, I possibly would not have discovered The 1975.

Eventually, it wasn’t just The 1975. I began to listen to other artists on their record label or artists the band had collaborated with. Wolf Alice, beabadoobee, Pale Waves, The Japanese House, Rina Sawayama, Phoebe Bridgers, the list goes on. And these, of course, each led to the discovery of even more artists. But it all started with The 1975, and my honestly commendable perseverance to keep listening to them despite not liking their music.

So if you were wondering whether to listen to The 1975, this is your sign. Whether you only know their hits like ‘Chocolate’ or ‘Somebody Else’, or like me, you despise(d) them, you never know: they might just become your favourite band too.