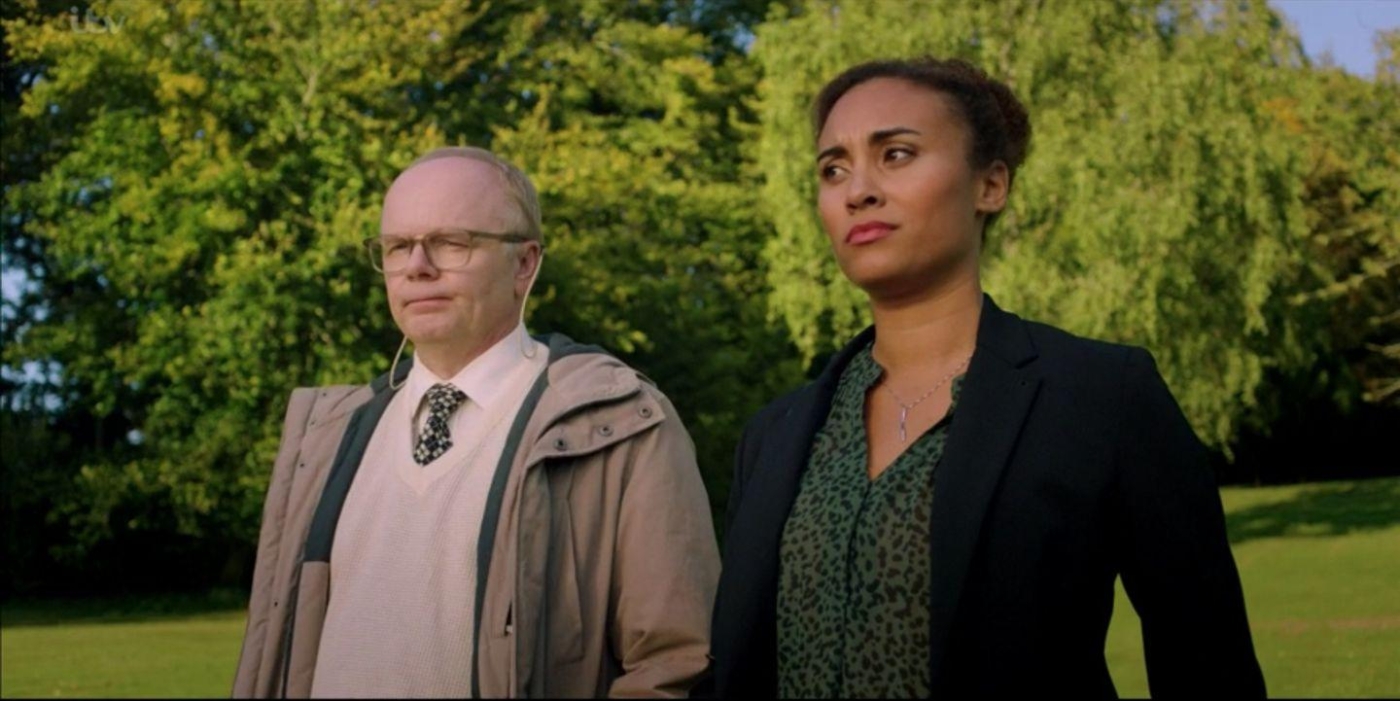 If there’s one thing ITV does better than anyone else, it’s cosy two-hour murder mysteries. Just look at its selection of Agatha Christie adaptations and the enjoyably bonkers Midsomer Murders for proof of that. And a potential new addition to that stable in recent years is McDonald & Dodds, a Bath-set mystery featuring the customary pair of mismatched detectives.

If you’ve followed my blogs for the past two series, you’ll know that I’m mixed on the show – it’s stunning and the lead duo are brilliant, but it always seemed to have a bit of an identity crisis about what sort of crime show it wanted to be. Well, a third series has now begun – will ‘Belvedere’ be the answer to my worries?

convinced that the house has something to do with the murder…

DCI McDonald (Tala Gouveia) and DS Dodds (Jason Watkins) are called to the scene of a mysterious death – a young woman has died in a busy park in broad daylight, surrounded by witnesses, with a smile on her dead face. The circumstances appear suspicious, and McDonald remembers having seen the woman earlier that day, at a linguistics lecture delivered by  renowned academic George Gillan (Alan Davies). The two detectives follow up with him, and their inquiries lead them to his house Belvedere and his sprightly mother Agnes (Dame Sian Phillips), who is on the verge of her 100th birthday. McDonald is convinced that the house has something to do with the murder, but uncovering its history also forces Dodds to start digging into his own past.

It’s a pleasure to return to Bath when the production values are so high, and the episode starts with a pursuit through the city that brings out two of the show’s biggest strengths – the beauty of the city, and the dynamic between the two lead detectives. Watkins continues to shine as Dodds, and it seems like this series might dig more into his backstory (I certainly hope so, or we’ll have wasted a lot of this episode on moments that don’t really matter). On the police side, we have a new addition to the cast in the form of Claire Skinner – she takes over from James Murray as the new police superintendent Ormond, who is quietly intimidating but not that much of a character just yet.

‘Belvedere’ boasts a somewhat tight supporting cast of suspects, but everyone pulls their weight and contributes to the mystery. Davies, no stranger to crime shows himself, is the right mix of quirky and serious as Gillan, and Catherine Tyldesley puts in a strong turn as single mum Kate Porter. But the real star of the episode is Dame Sian, whose Agnes is formidable and hilarious in equal measure – she’s so watchable, and the episode comes to life whenever she’s bouncing off Watkins or Davies.

In the past, I’ve hammered this show for presenting incredibly intricate mysteries, and then being far too quick to tell us who committed them and how – it wanted to be a Columbo as well as a traditional mystery, really hurting it. I was worried that ‘Belvedere’ would fall back into this habit, but fortunately not – there’s a strong mystery at the heart of this one, and the show actually forces us to work it out for a change. As a linguist myself, I appreciated the episode’s clever use of language clues, but there’s genuinely strong detective work all around –I like it when detectives have to detect and are clever about it. The show’s mystery writing has always been quite strong, and Robert Murphy’s script shows no sign that that will change.

‘Belvedere’ is a strong start to this run of McDonald & Dodds, and I think it proves that the show is cementing its strengths while dealing with some of the issues that have held it back in the previous series. There’s an engaging mystery that doesn’t show its hand, and a god cast all working in tandem, and it makes for a brilliant two hours of crime – it’s got me very excited to return to Bath next week.