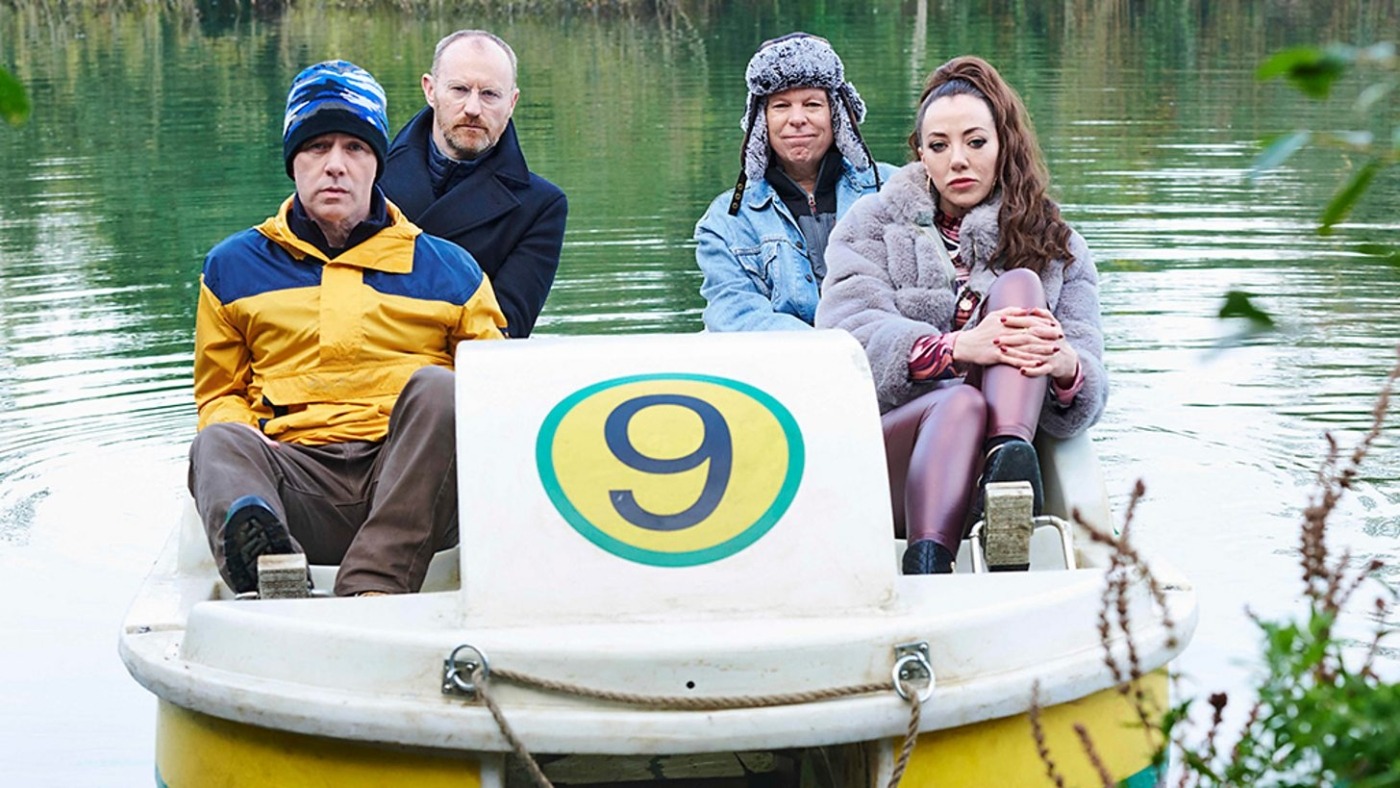 To an extent, I’m like a broken record. Every year, I write an Inside No. 9 series blog and sing its praises as one of the best and most inventive shows on TV. Steve Pemberton and Reece Shearsmith’s anthology series has, over six runs, brought us stories that are beautifully crafted, well-acted and frequently toe that fine line between horrific and comedic. It’s now time for a seventh run and, in my time-honoured way, I’m back to sing the show’s praises – on the strength of the incredible ‘Merrily, Merrily’, it looks like it’s going to be another good series.

As tensions flare, it soon transpires that Lawrence may have had a different reason for reassembling the group.

Lawrence (Shearsmith) has arranged a reunion with his two old university friends, Callum (Mark Gatiss) and Darren (Pemberton), at a remote lake. His plan is that the three of them take a pedalo to an island, but he finds that things haven’t gone quite according to plan, not least because Darren has invited along his new girlfriend Donna (Diane Morgan). The group set sail, and casual chit-chat soon leads to the reopening of old wounds and resurfacing memories of the three men’s pasts. As tensions flare, it soon transpires that Lawrence may have had a different reason for reassembling the group.

For many viewers, the immediate selling point of this episode was the presence of Mark Gatiss, Pemberton and Shearsmith’s collaborator on The League of Gentleman (and guest star in the Rope parody episode of Psychoville, a de facto pilot for Inside No. 9). I’ve mentioned in previous blogs that Pemberton and Shearsmith share a natural chemistry as a result of being friends for so long – if you’re telling a story about three old friends, why not bring in the third member of your group? And they all shine – they’re set up as the uptight one (Shearsmith), the superior one (Gatiss) and the loudmouth (Pemberton), but the script lets them go to a lot of other places quite naturally. Lines delivered earlier on come back to hit us hard as secrets are revealed.

Morgan’s role, by contrast, was a mainly comedic presence, getting a lot of great lines yet winding up far more well- rounded than the plot would suggest. Seven series in, and neither writer has lost their ability to craft fully-realised characters within the limits of a 28-minute show – you have a real sense of who these people are, and the conflicts on the pedalo arise as naturally as if we’d been following them for years. It helped, of course, that this is perhaps the show’s most isolated setting ever – director Al Campbell uses stunning shots of the lake to bring home just how far away from anything and anyone the group is.

an ambiguous ending that capped things off beautifully and packed a real punch.

Of course, this is an Inside No. 9, so things may not necessarily be as straight-forward as I’m suggesting (of course, there will be no spoilers here). In the first shot, we see Lawrence staring at a mystery figure on the bank, who may or may not be watching him. And there are hints and undercurrents at something darker in store, as always. But I did not see some of the tonal jumps that ‘Merrily, Merrily’ would make, nor the places to which it would take us. I laughed, I winced, and I even cried a little at this episode, and I was stunned by an ambiguous ending that capped things off beautifully and packed a real punch. Pemberton and Shearsmith leave a number of things unanswered (but suggested), but I think that really works here.

‘Merrily, Merrily’ is a fantastic opener, playing to Inside No. 9’s strengths and playing with its reputation. The cast delivers – the reunion with Gatiss is a real treat, and Morgan proves a welcome fourth member of the trope – and the story is beautifully scripted and delivered. If there’s one thing the show can do well, it’s offering unexpected (but expectedly strong and engaging) treats – ‘Merrily’ Merrily’ is proof of that magic touch.