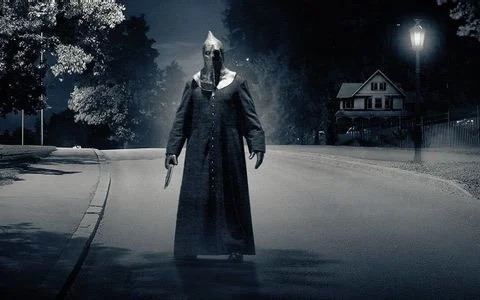 There’s no shortage of horror content on TV, but one show that has flown a little under the radar is Slasher. This Canadian show doesn’t get enough hype, but it’s certainly worth checking out if you’re a horror fan. Here’s a little retrospective on the show’s four series thus far, what it gets right, and why you should give it a watch.

The general premise of the show has been the same across its four series – a masked killer stalks a cast of characters, picking them off one by one, as they attempt to survive and work out who the murderer is. However, Slasher is an anthology show, meaning despite a familiar set-up and a number of recurring actors, each season takes place in a different location. The first, The Executioner, sees a series of copycat murders when a woman returns to the town of her birth. Guilty Party sees a parka-clad killer commit murders at former summer camp in the dead of winter. In Solstice, a group of neighbours are targeted one year after a murder on their doorstep, and Flesh & Blood sees the wealthy Galloway family reunite for a series of twisted games on their patriarch’s island.

The Executioner follows Sarah Bennett (Katie McGrath), who returns to the home in which his parents were murdered years before. This prompts a series of murders by an eponymous copycat, inspired by the Seven Deadly Sins, while Sarah consults with the original killer, now locked up in prison. Retrospectively, it’s clear that the first series doesn’t quite live up to the potential of its later runs – the murderer is much too obvious, and the ‘one episode, one death’ rule kills a lot of tension – but the killer is a terrifying one, and the run sold me on the show.

A number of these mistakes are mitigated in Guilty Party, where our killer stalks the ex-camp counsellors (all of whom share a terrible secret) and people at a yoga retreat. It’s genuinely more surprising – one of the first deaths was someone I didn’t expect to go so early, and the killer reveal is an effective and unexpected one. It also can’t be understated how effective the setting is – the snowed-in lodge is a claustrophobic place, adding to the tension, although you will be frustrated with how often the characters find reasons to wander off on their own while a killer is about.

The show really hit its stride in Solstice, by far the strongest series and the one that really demonstrates how brutal and relevant a modern slasher show should look. It boasts a diverse cast, ranging from a Muslim lead to a number of LGBTQ characters to a neo-Nazi, and it tackles issues of cyberbullying, online stalking and VR in ways that feel organic. Socially-charged horror either works or it falls flat – there’s no in-between, and fortunately, Solstice is the former.

Of course, a slasher show also needs to boast a bunch of kills, and this series is Slasher throwing gruesome death after gruesome death. The Druid (a fantastic design for a killer) racks up some very graphic murders, with a set-piece in a school the brutal highlight. When the show shifted to Shudder for its fourth series, how could it maintain its momentum? The answer pleased many of a horror fan – by bringing in genre legend David Cronenberg. He plays Spencer Galloway, who stirs up rivalries as he encourages his family to compete for his fortune. There’s already a palpable air of danger even before the Gentleman gets involved, not least because of the monstrous daughter Florence (played by Sabrina Grdevich, she’s an awful woman you’ll love to hate).

The series loses its way a little towards the end – the identity of the killer is again fairly obvious quite early on, and the final episode has been broadly panned – but it’s still an overall successful run. If you’re a Slasher fan, it’ll excite you to hear that a fifth series is on the way. We don’t know that much at the moment about Slasher: Ripper, outside of the fact that Eric McCormack will place the lead character, but the plot description certainly sounds promising: “The series is heading back in time to the late 19th century — there’s a killer stalking the mean streets, but instead of targeting the poor and downtrodden like Jack the Ripper, The Widow is meting out justice against the rich and powerful. The only person standing in the way of this killer is the newly promoted detective, Kenneth Rijkers, whose ironclad belief in justice may wind up being yet another victim.”

Go and check out Slasher if you’re a horror fan – you won’t be disappointed!