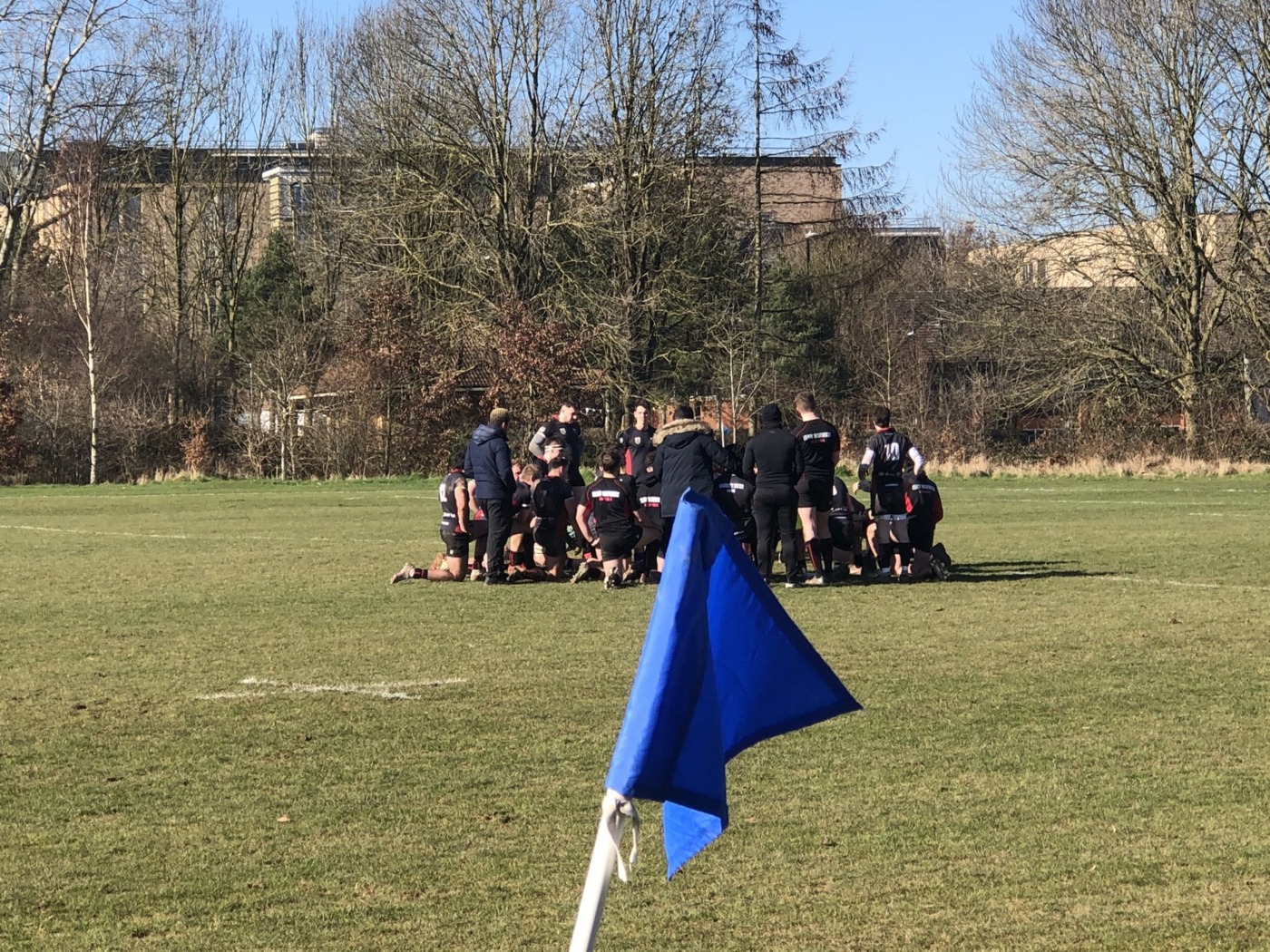 When arriving at the pitch 45 minutes before kick off, it was clear which team had the point to prove. The Coventry side were loud and ferocious with their pre-match warmup, while Warwick were more lax: the back line passing the ball between themselves, with the forwards stretching their ligaments. Warwick carried the air of a side who had a comprehensive run of victories in this fixture prior to this meeting.

During the post-match interview, Warwick forward Gerald Ako-Otchere conceded that they “started really quickly, had intensity, [but then] lost it in the middle” – and that’s exactly how the first 40 unfolded. Coventry were penned on their 20 yard line thanks to a tenacious defensive display by Warwick within the first five minutes of kick-off. There was nowhere to go for the boys in blue, and eventually the men in black profited from this with an early try along the left wing to make it 5-0.

It was truly men against boys for the first 10 minutes: Warwick full-back Enrico Lacorte’s nimble footwork making a mockery of the Coventry defensive line at moments, and it wasn’t too long until inside-centre Luca Allies’ incisive run put the team two tries ahead. Yet the losing team summoned a spirit within themselves to claw it back. Admittedly, throughout the match Coventry outmatched Warwick in the scrums and lineouts, and it was through a strong scrum that they retrieved a try to make it 12-7 with 15 minutes gone. The game turned from here.

Coventry’s forward line put on an impressive display. What the team may have lacked in talent and skill, they more than made up for in doing the fundamentals impeccably. Their forwards went through the phases wonderfully, they were quicker to the breakdowns, and players like Thomas Bradner and Henry McCartney at eight and seven respectively were sheer battering rams. Their force proved effective as their play was responsible for Coventry taking control of the game, and eventually leading 12-17 after the sustained forward assaults.

We definitely panicked to start off with, but then calmed down, slowed the game down, and [then] it was all good

Warwick didn’t seem to find the authority they started the game with ever again. But with a few minutes before the break, thanks to the quick-thinking of their hooker Toby Keen when they were granted a penalty, the Blacks nudged ahead with the score at 19-17. Despite the lead, by half-time it seemed Warwick were dazed. One would’ve been foolish to think that the bout would be smooth-sailing from here on out.

The second half began very evenly, yet it was evident which side was going to puncture the opposition’s defensive line first. Coventry’s outside-centre Mark Ikhifa sent warning signs to the Warwick side with some of his marauding runs in the first half, and it came home to roost with a try that sent the Blues 19-24 ahead.

By the midway point of the second half, Warwick seemed to be going through the motions: they didn’t mount sustained attacks and their lineouts were pitiful at times. Nonetheless, when they decided to reassert themselves into the fixture, it paid dividends, outside-centre Mackenzie South driving onto the try line after a couple of minutes of constant pressure on the Coventry defence, with Warwick nudging ahead 26-24.

At this point, the game became more pedestrian, and Warwick’s quality (as well as Coventry’s fatigue) was becoming apparent. With roughly five minutes left on the clock, the game was put out of sight after a lovely move – the first time Warwick’s forwards put some solid phases together – and it was capped off with a stunning conversion by fly-half Luke Jelley to make it 33-24.

After the game, Ako-Otchere did reveal that the team “definitely panicked” at points during the game, but they “calmed down, slowed down the play and [then] it was all good”. I concur. Though it was far from a vintage performance from Warwick, they had just enough to put away a spirited Coventry side.