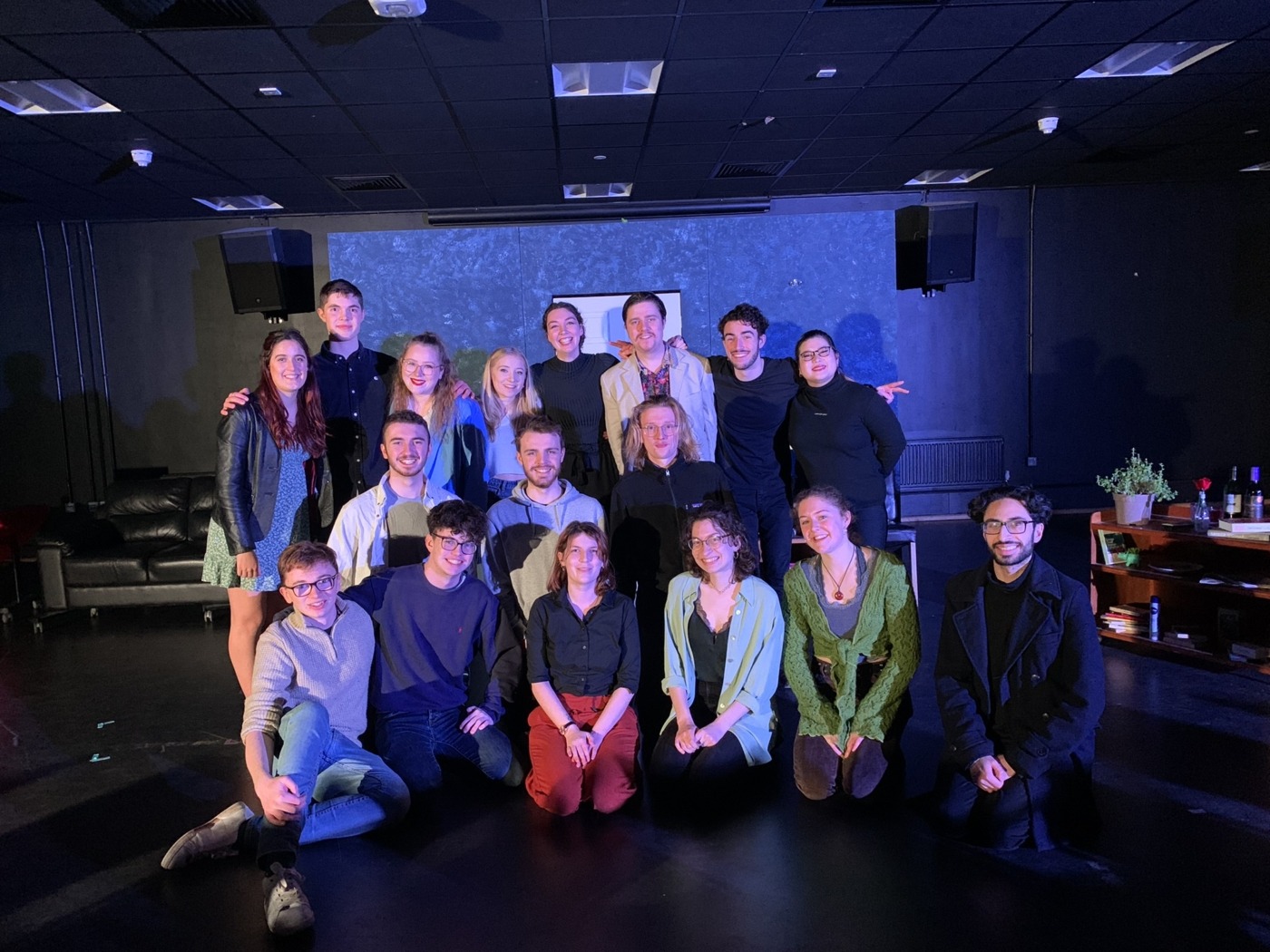 ‘The Last Romantic’ review: a delight for cynics and romantics alike

The Last Romantic is a witty, darkly funny satire on creative conditions in today’s entertainment industry. Set in Hollywood, it follows the story of semi-successful actor James Wright (Ollie Hotchin), making a living from his participation in high-quality productions such as The Great Dictator 3D, and aspiring writer Julia Smith (Anna Butcher), whose talents are clearly wasted in stuffy writers’ rooms filled with male colleagues overly confident in their own original genius.  The play was created by Shoot The Messenger Productions, a company run by Warwick students Patrick O’Brien and Ella McQueen, and the cast and crew consist of two dozen Warwick students from various academic backgrounds.

Hollywood, as the play imagines it, is populated by convincingly observed archetypes of the creative industry, such as Chet (Lizzie Hart), the boisterous all-American agent who unironically ‘thanks God for Judy Garland’, Perry (Scott Montague), the loudmouth who uses big fancy words, turtlenecks and tweed to hide his complete lack of skill or knowledge, and Shelly (Eleanor Bett), the disorganised and eccentric artist unaware of her own remarkable talent. Both Julia and James, the play’s eponymous last romantics, are lonely characters that seem out of place in this shallow, sugarcoated dreamland. When they run into each other by chance, they are pleasantly surprised to meet a kindred spirit and decide to become rebels with a clearly marked joint cause: changing the entertainment industry for the better. As they work on a play-within-the-play (a lovely detail) together, their relationship evolves from a friendly working one to romantic involvement.

Crafting convincing dialogue is for many a writer’s worst nightmare, and making it funny on top of that seems to be a positively insurmountable challenge, but O’Brien has succeeded at both

The Last Romantic was staged at Avon Drama Studio for two nights only on 25 and 26 February. Since this is a (presumably low-budget) student production with no pyrotechnics, no revolving stage, and no deus ex machina, the dialogue and the acting have to be sleek for it to pull through – and I’m happy to report that they are. Company owner O’Brien is also the writer of The Last Romantic, and what a brilliant job he has done! Crafting convincing dialogue is for many a writer’s worst nightmare, and making it funny on top of that seems to be a positively insurmountable challenge, but he has succeeded at both. The clear joy and dynamic energy that the actors bring to this production quickly spread to the audience, and interspersing the comedic parts with more serious moments creates a great rhythm. It provides a strong criticism of what it perceives to be an entertainment industry dominated by formulaic, profit-driven filmmaking aimed at an imagined audience of supposed seven-year-olds who believe Charlie Chaplin was an American president. This is accompanied by contempt for those who try to create something that goes beyond mere entertainment and might actually be considered art.

Whilst effectively crafted, it is perhaps a shame that the play’s focus is so predominantly on the American entertainment industry, particularly Hollywood. This is not to say that it is somehow unsuccessful in portraying this context. On the contrary: the American accents were very well done for the most part, thanks to accent coach Joseph Sampson. The consideration that the two main characters are British, which is picked up on onstage, also makes for a nice transatlantic connection. But conditions in the American filmmaking industry seem to lend themselves to criticism given that this is where many scandals of recent years have originated from, with #MeToo as the most memorable one.  There are already a host of high-profile productions set in Los Angeles or Hollywood and to some extent discussing conditions within the industry, such as La La Land, Once Upon a Time in Hollywood, and most recently Licorice Pizza. There is, of course, nothing new under the sun, and it is remarkable for a student production to come up with an original storyline and characters in the first place, rather than just adapting an already existing play, but at times, The Last Romantic feels like it has taken too much inspiration from these other stories.

What will it be: sacrificing their artistic integrity for success and greed or staying true to their values and creating something of truly high quality even though it might never see the light of day?

However, this does not necessarily subtract from the overall quality of the play, which is far above simply being good for a student production – it is a piece of art in its own right. And as art loves referencing other art, this play provides its very own take on the final interrogation scene from George Orwell’s ‘1984’, but in an updated version that sees both protagonists facing difficult choices. What will it be: sacrificing their artistic integrity for success and greed, as personified by studio owner Mx Reed (Samantha Lau)  –  or staying true to their values and creating something of truly high quality even though it might never see the light of day? Suffice it to say that there can only be one last romantic, which makes for a deeply frustrating but ultimately consistent ending.

The Last Romantic is a remarkable production, as it strikes a balance between providing plenty of food for political thought and making you laugh so much your ribs hurt. It is a delight for cynics and romantics alike.