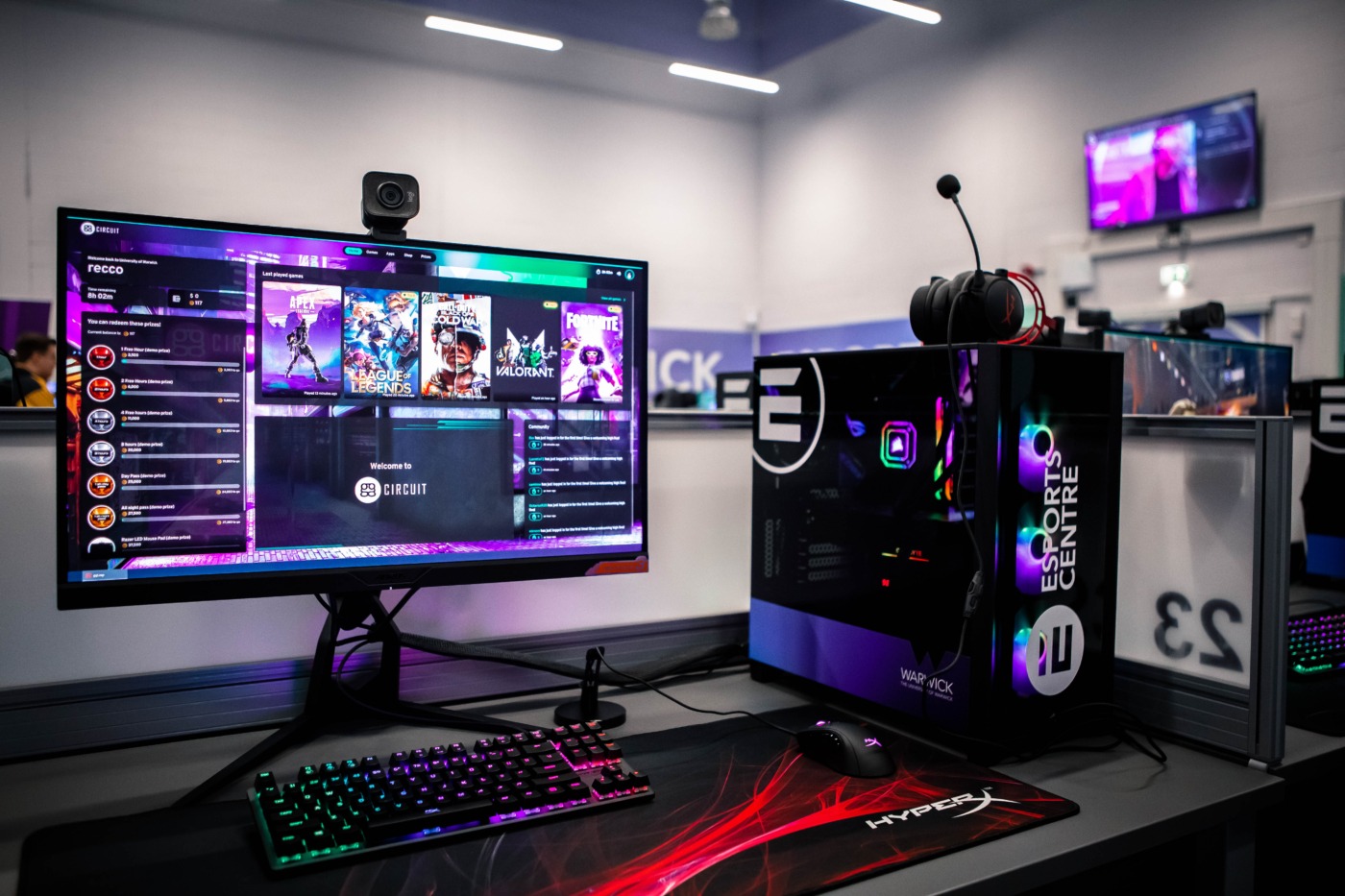 In December, Eric, Games sub-editor, and myself, Sidney, interviewed Jack Fenton, Head of Esports at Warwick and former president and founder of Warwick Esports Society.

Eric asked about Jack’s first impressions of the centre since its term one opening. “I’m really happy with how it’s gone,” says Jack, “I’ve been involved with the centre’s production right from the start. Even after graduation, I’m still working in esports.”

“We got quite lucky, my vision for the centre was not for it to be a dark gamer dungeon, which is what many esports cafes end up being – often in literal basements. It all makes for a claustrophobic experience. Getting this space in the old Desso Hall was great, we have high ceilings, state-of-the-art air conditioning, underfloor heating, and perfectly regulated temperatures. It allows us to pursue esports and gaming in a really healthy way.”

The centre had a wonderful opening ceremony in September, located in Junction, so I asked Jack what he thought the centre offered students and the public.

“I founded the society because of some of the friendships I saw being made.”

“I think the big thing is it offers access to kit you couldn’t otherwise use,” explains Jack, “how often can you play on [RTX]3080, that we have in all 24 units here? Warwick Esports as a community of players enters more players into university leagues than any other and are the most successful – we’re the back-to-back-to-back champions.”

Jack explained how students may not know whether they want to invest thousands into a computer or if they even could, whereas the centre offers use of their computers “for a really affordable price.”

When it came to the centre’s impact, Jack highlighted inspiration. He said: “I’ve had students approach me with questions about how to get involved, had inquiries on our website saying they’d love to learn about the industry.”

Jack helped found Warwick Esports before taking up the University position, so Eric asked why he chose to do this? The answer was simple, “I founded the society because of some of the friendships I saw being made,” Jack answered.

“A lot of people just come to university, write their papers, do their exams, and then graduate. Not only does that affect their graduate opportunities, but also impacts their experience at University.”

“When I joined Warwick there was only really a League of Legends club, I joined them and played in a university league. I wasn’t very good at the time, but really enjoyed it and made lots of friends, and got better very quickly as I’m a very competitive person. I even got propelled into a professional coaching career part-time on top of my degree.”

“Something that doesn’t get talked about enough is how important it is to have a group of friends that support you, your studies, and your professional pursuits,” he highlighted. “A lot of people just come to university, write their papers, do their exams, and then graduate. Not only does that affect their graduate opportunities, but also impacts their experience at University.”

A major reason for creating the society was to bring people together and “support the titles that weren’t being supported,” he explained. “Very quickly I was talking to CS:GO, Siege, and Hearthstone players, getting them under our wing and then rebranded the League society into Warwick Esports. The reason I put my time into that rather than another society was just that I love video games, especially esports.”

When asked if he had a favourite memory from his four-year involvement with the society, Jack replied, “my favourite memory links heavily to friendships,” talking about a circle where one member very emotionally hugged and thanked him for founding the society because of the friends he had made from it.

“Societies are like start-ups but they’re not making money, presidents are having the gruelling experience of running a start-up, without getting any money back for it, all with a degree, friendships, and relationships on top.”

Jack also gave his thoughts on the running of a society. “I think people don’t get enough credit for what they do extracurricularly, I imagine you two will emphasise with the time you put into The Boar without being paid. This is especially the case for presidents. Societies are like start-ups but they’re not making money, presidents are having the gruelling experience of running a start-up, without getting any money back for it, all with a degree, friendships, and relationships on top.”

The University invested £275,000 in the centre, and Jack says it is now his responsibility to see it grow. Jack said he dislikes esports degrees, rather he wants it “to be integrated with modules, for example, if you study creative writing, you could have hands-on experience with narrative-heavy games and write an essay on that, it may be the portfolio piece that gets them a job at a games company.”

Leamington Spa is a centre for games in the UK and Jack wants to extend links with them. In the short-term he wants launches and play-testing to happen here. “We want these people to be in here, giving industry insights, talks, career days, and then long-term to collaborate with us for our educational programmes,” Jack explained.

Away from the professional side, we wanted to find out a few personal, gaming-related things about the man running the centre. When asked for his favourite non-esports game, we stumped Jack, he highlighted Pokémon from his childhood, Halo, before settling on Minecraft saying, “if I’m not playing an esports game, it must be something where I can build stuff and be creative.”

“One thing I kind of rile people up about is I’m very vocal about esports degrees.”

Favourite esports title was easy – League of Legends, followed by Apex Legends. When asked for his least favourite game Jack settled on CS:GO, due to “some of the user base, the betting, and the corruption.” He explained it’s an impossible game to market and make publicly accessible, no matter how popular it is.

I wanted to ask for Jack’s most controversial gaming take, but Eric felt Jack had answered this as CS:GO is his favourite. Jack replied, “that’s why I’m always careful, we have many CS:GO players and loads of people enjoy it, but my perspective is about developing esports, which CS:GO is very hard for.”

“One thing I kind of rile people up about is I’m very vocal about esports degrees. A lot of people’s first question is will there be a degree, the answer is no. We’re going to integrate it into education the way it should be. My other controversial take is I don’t like education in the UK, it shoehorns you into a purely academic path. Warwick is a victim of that, often being very theoretical and not based in the real world.”

“I don’t like the idea of creating a degree because it should be accessible for people to come from subjects like Law and History and apply this to esports, it should be an institute, not a department.”

Jack explained what else he saw for the future. “I hope that by us being active, vocal, and honestly disruptive to the industry, people will join forces with us and put the UK on the map for esports.”

(Jack) wants an institute with its own building, an amphitheatre to host national competitions, and bring the industry to Warwick and make it part of Warwick’s ten-year growth plan

He said the centre brings people out of their rooms and has multiple departments interested in collaboration. “Stuart Croft has been a very big supporter,” explained Jack, “I’m very lucky to have him and many other academics on board.”

Jack mused that he hoped that the centre and the new highlight on gaming will break the bad stereotypes of gamers. “The idea that it’s addictive is just as annoying as anything else, I always say well your son could infinitely play football if he could. There are addictive qualities in anything competitive, so everyone can shut up about that as far as I’m concerned.”

He spoke about how top players will usually exercise because to be a high-level player you must look after yourself. “Sport goes hand-in-hand with esports,” he argued, “Lisa Dodd, director of sport and active communities at Warwick has been one of my biggest supporters the last three years.”

When asked for his grand vision for esports at Warwick, Jack quickly answered that he wants an institute with its own building, an amphitheatre to host national competitions, and bring the industry to Warwick and make it part of Warwick’s ten-year growth plan.

We closed the interview with a reflection on the importance of gaming to his life. “You don’t enjoy games as much without playing with others or playing a game that helps you relate to others. If you play a single-player game you’ll get involved with that games’ community. Friendships aren’t made in a vacuum. From friends to family, you can use games to bond with them and have the best time!”