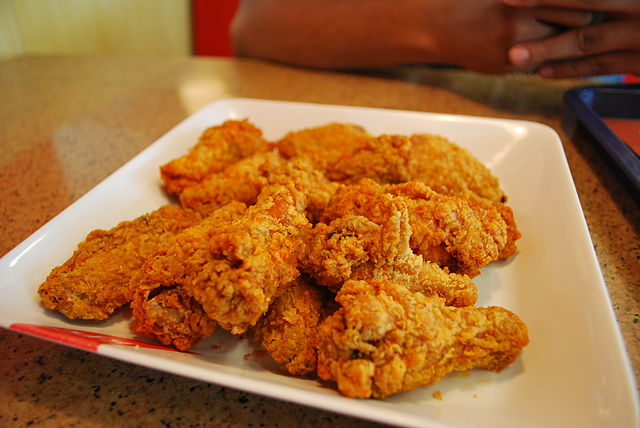 As a child, I always preferred KFC to McDonald’s – the flavour of that chicken was one of my favourite things. And many people feel that way – KFC is the world’s second-largest fast-food company for a reason. In this instalment of ‘Fast Food Finance’, I explore the history of KFC.

Born in 1890, Harland Sanders’ ability to cook came early. He was six when his father died, and he had to look after his younger siblings while his mother was forced to leave for days at a time to work in a canning factory. He took over the cooking, and eventually left home, aged 12, when his mother married a man who disliked children. He worked a series of odd jobs for 25 years and in 1929, with the Great Depression on the horizon, he opened a service station along Route 25 in Corbin, Kentucky.

Sanders was still the family cook, and he made some money on the side selling hot meals to passing drivers. His food was extremely well-received and garnered local renown, earning Sanders the title of honorary colonel for the Kentucky governor in 1936. In 1939, he also received a mention in Duncan Hines’ Adventures in Good Eating. It was clear that the food side of the business could be very successful, so Sanders did away with the gas pumps, and rebuilt the business as a 142-seat restaurant and motel. At this time, Sanders perfected the secret chicken recipe, and also developed a method for quickly and consistently frying big batches of chicken.

In the 1950s, two events led to franchising. In 1952, Sanders met Pete Harman, a restaurant owner from Utah, at a food seminar. They struck a deal, and Harman opened Kentucky Fried Chicken in Salt Lake City. It was Harman who invented the iconic bucket design (first sold in 1957), and he achieved great success. Harman was also responsible for the company’s slogan – he would appear in local ads for the restaurant, filmed at a Phoenix TV station, eating a plate of chicken while his restaurant manager, Ken Harbough, delivered the narration. After one such commercial, a viewer complained to the station, objecting to the imagery of Harman licking his fingers while he ate. When he heard about the call, Harbough blurted out: “Well, it’s finger lickin’ good”. It made its way up the corporate chain and stuck.

For Sanders however, changes to local roads had resulted in less traffic, reducing his sales. In 1956, he sold the Corbin location and went on the road, drumming up interest in his franchise while in his 60s. He took a portable pressure cooker and seasoning from restaurant to restaurant, cooking for the staff and convincing them to buy into the company at a price of four cents for every chicken they cooked with his process.

By 1964, there were already over 600 KFC locations in the USA and Canada, but change was afoot. After months of wooing, Sanders was convinced to sell the business for $2 million, an annual salary, and a position as adviser and spokesman. Outside of a little dissatisfaction with some of the franchises (at one point, he tried to open a competing restaurant called Claudia Sanders: The Colonel’s Lady), he was involved and invested in the product and its promotion until his death in 1980.

The strength of the brand comes from how good the food tastes, and the mystery of the chicken recipe. The blend of 11 herbs and spices is only known to a few people, and supplied by two separate companies so outside sources can’t deduce it. But not every recipe has lived on – the company decided early on to change the gravy recipe because it was too complex for a fast-food restaurant. A company executive in 1970 said: “Let’s face it, the Colonel’s gravy was fantastic, but you had to be a Rhodes Scholar to cook it.” It also underwent a name change in 1991 – the company phased out Kentucky Fried Chicken for fear that the term ‘fried’ was costing them money, so KFC now doesn’t actually stand for anything.

Nowadays, there are around 23,000 KFC locations in more than 105 countries across the world, and the company is valued at $8.5 billion. There’s a comic book about Sanders’ life – The Colonel’s Adventure Comics – and he stars in a video game entitled Colonel Quest. It’s more popular than McDonald’s in China, and thanks to a genius advertising campaign, KFC is now the traditional Christmas Eve dinner in Japan.

The KFC story is a great example of how one man turned a brilliant product into a worldwide business with a combination of vision and drive, and a generation of diners will forever be thankful to Colonel Sanders.