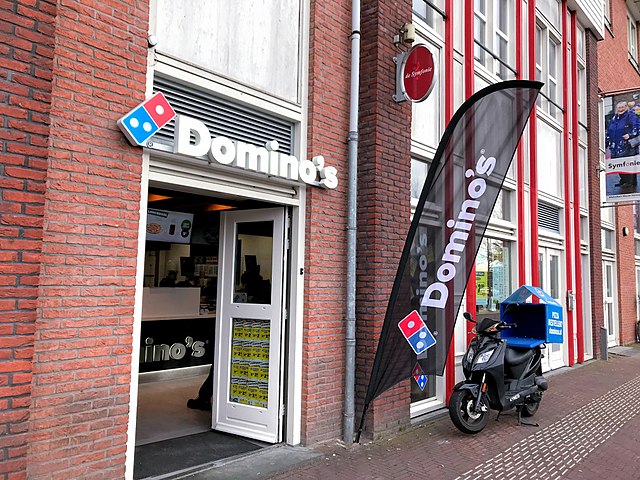 If one fast food restaurant holds a special place in my heart, it’s Domino’s Pizza. I worked there for six years, and I can tell you first-hand exactly how much demand there is for everything from pizza to breadsticks. But what are the deeper reasons why Domino’s the go-to if you’re after pizza, not just in Britain, but across the globe?

The story began in America in 1960 with two brothers called Tom and Jim Monaghan. Tom was living with his brother Jim in Michigan after being conned out of $2,000 by a crook he met while hitchhiking. Jim worked for the U.S. Post Office and did occasional carpentry work at a pizza shop called DomiNick’s.

One day, he heard the owner discussing a possible sale, and mentioned buying it as a possibility to Tom. With the help of a $900 loan from the Post Office credit union, the brothers brought the shop in December 1960.

The business idea was simple: deliver hot, freshly made pizzas in as quick a time as safely possible, while playing an active role in the community. But it wasn’t an immediate success and, after eight months, Jim wanted out. He traded off his 50 percent share to his brother for a beat-up 1959 Volkswagen Beetle that the two were using as a delivery car (the concept was delivery-centric since the beginning, because the original store didn’t have the space to sit down).

By 1965, Tom Monaghan had purchased two additional pizzerias – he wanted the stores to share the same branding, but the original owner forbade him from using the DomiNick’s name. An employee suggested Domino’s Pizza, and Monaghan rebranded the business in 1965.

The Domino’s logo has three dots, designed to represent the three stores. Monaghan intended to add a new dot with the addition of each new store, but the rapid growth of the business soon put paid to that idea. The chain opened its first franchise location in 1967, and by 1978, 200 had been constructed.

The company’s first international location opened in Canada in 1983, the same year it opened its 1,000th store and an Australian branch. In 1985, the company opened pizzerias in the rest of Asia and its first stores in the U.K.. It reached South America in 1988, and opened its 5,000th store in the US the year after.

There were issues along the road. In 1975, Domino’s faced a suit by Amstar Corporation, the maker of Domino Sugar, alleging trademark infringement and unfair competition. Legal proceedings rumbled on for five years before courts found in favour of the pizza company. It was also forced to react to market demand for the first time in 1989, introducing the deep pan pizza.

Overall though, things ran impressively and Domino’s kept growing. As Monaghan standardised his business practices and expanded the number of locations, he made his famous ‘30 minutes delivery or the food is less/free’ promise (although this was discontinued in 1993, after a number of deaths and injuries linked to delivery drivers).

After 38 years of ownership, Tom Monaghan announced his retirement in 1998, selling the company to Bain Capital, Inc. for about $1 billion, and devoted his time to Catholic philanthropy.

In 2020, Domino’s generated a revenue of $4.12 billion worldwide. The number has been growing every year since 2009, the year they changed their 49-year-old recipe following criticism that it tasted like cardboard. It’s estimated that the franchise employs more than 350,000 people globally, and that it sells an average of three million pizzas a day.

For the majority of its existence, Domino’s only offered two sizes of pizza, 11 toppings, and one soft drink (cola), believing that the simplicity of the menu would result in a higher-quality product and more efficiency – the first non-pizza menu item, breadsticks, weren’t offered until 1992. Now, it has been calculated that, with an expanded menu, there are more than 34 million different ways to create a single Domino’s pizza.

The company is the world’s top grossing pizza chain world in terms of revenue – only Pizza Hut comes close. It’s not a bad turn for a carpenter who decided to take a chance on a struggling pizza shop, and revolutionised the industry in the process