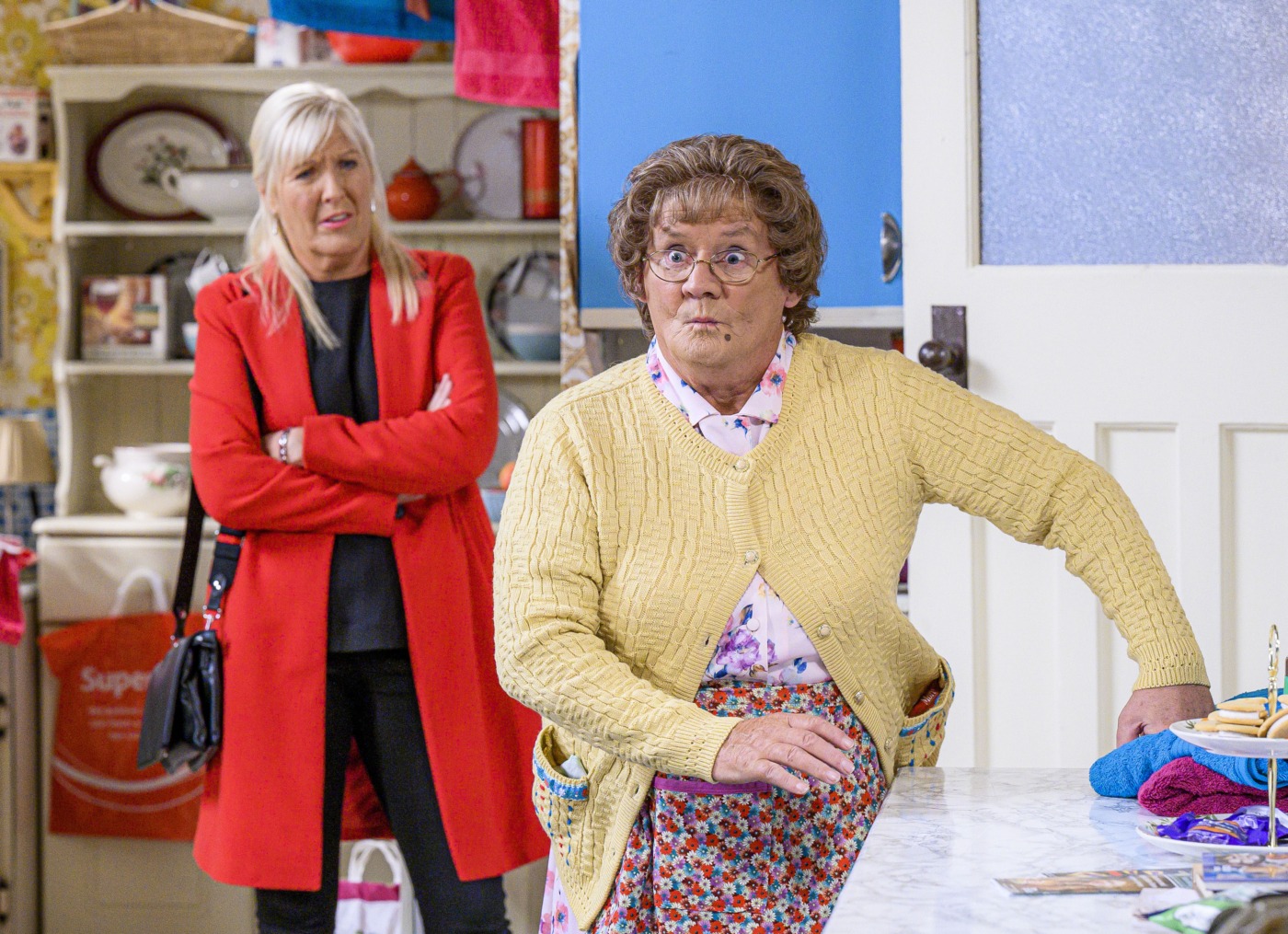 Christmas brings with it a lot of traditions from the pulling of crackers to the exchanging of gifts. There’s one modern addition to the list that is standing strong: critics slating Mrs Brown’s Boys as audiences flock to it. Brendan O’Carroll’s sitcom is still going strong, and the end of 2021 brought us two new instalments of the Brown family. And this year, both fans and detractors can be happy – one episode was a hit, while the other was most definitely a miss.

On Christmas Day, the BBC aired ‘Mammy’s Mechanical Merriment’. Agnes (Brendan O’Carroll) is unhappy to be told she shouldn’t sing or dance in the choir, but her thoughts are soon distracted by a Christmas tree shortage and the knowledge she has to lose some of her Covid weight. Meanwhile, Dermot (Paddy Houlihan) and Buster (Danny O’Carroll) organise a charity murder mystery night for alcoholic greyhounds – to their mind, a sure-fire money-making scheme. Of course, things go wrong in Finglas.

On the whole, ‘Mammy’s Mechanical Merriment’ is a fun, enjoyable episode

I really enjoyed this one, and I thought it was full of cracking gags. We get some of the staples, including the traditional farce with the Christmas tree (to quote Agnes, “it’s a fucking ladder”), Agnes looks to the camera to break the fourth wall, and things going wrong – in this case, Winnie (Eilish O’Carroll) accidentally knocking over a cup of tea. But it also boasted a number of great lines, with Winnie’s continued references to the fact Jacko wants her to drink his “nut juice” one of the highlights. I’m not going to claim it’s the cleverest humour in the world but it made me laugh, and that’s all I need from a comedy.

This is not to say that the episode is flawless – the overly excited Dr Flynn (Derek Reddin) doesn’t contribute much in the way of laughs, and I’m baffled by the decision to make such a big deal out of the choir storyline only to not show it at all (although some crap singing attempts by Agnes around the house did make me chuckle). But on the whole, ‘Mammy’s Mechanical Merriment’ is a fun, enjoyable episode.

Let’s move onto New Year’s Day with ‘Mammy’s Mickey’. Winnie is feeling down about her life, and wants to change in 2022. She asks Agnes for advice, but Mrs Brown is distracted by the new that Granddad’s brother Mickey (John Masterson) is out of prison and planning to visit. She suspects he’ll be attempting to con Granddad out of more money, and attempts to deal with the visitor. Meanwhile, the boys have a heart to heart about what they contribute to the family.

Heart is really the key word here, because this episode has reconciliation and fresh starts on the cards (with the exception of Mickey, that is). There are some lovely moments here: Dermot and Buster sitting down with Trevor (Martin Delany) and Mark (Pat Shields) discussing their lives, and the weird half-row between Agnes and Winnie about how much they value each other. Mickey is the perfect counterpoint to this, though he’s barely used at all. As Agnes says in the closing monologue: family is the people you care about, and I think that’s a wonderful message to take into 2022.

The problem with the second episode is that it isn’t particularly funny (something that has been echoed a lot in newspapers in recent days). Admittedly, it appears to be going for a more heartfelt vibe, yet previous instalments have managed to be sweet and amusing – it’s a shame that ‘Mammy’s Mickey’ can’t pull it off too. None of the running gags – Winnie coming up with an outlandish way to change her life, or Father Damien (Conor Moloney) breaking the seal of the confession – really land, nor even all of the character beats (I really didn’t care about Barbara and the salon). When the funniest moment of the show is an improvised gag about the quality of the script (at which I laughed a lot), that’s a worrying sign.

The 2021 Mrs Brown’s Boys delivered a mixed bag of episodes. But over the holidays, they made a lot of people laugh and they accentuated the value of family, and I think those are both huge positives to take away. It’s not the best show on TV by any means, but it’s fun, and sometimes that’s all you need.

Pantos are great: in defence of the mocked festive tradition