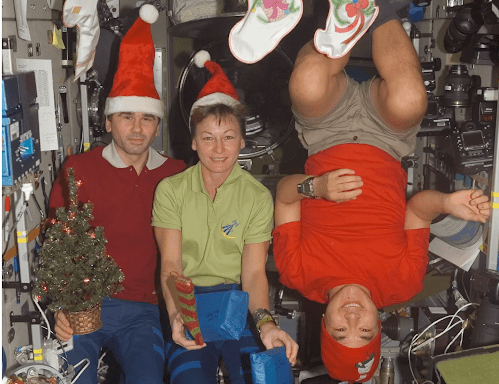 Christmas is a time to be with loved ones however, for astronauts, this is easier said than done. There are currently 10 people out in space and since Christmas is literally a few days away, their only company on the big day will be with each other.

The first people to spend Christmas in space were those on Apollo 8, which also happened to be the first crewed spacecraft to leave low Earth orbit. The mission began on the 21st of December 1968 and lasted six days. However, it is not all that common for a mission to coincide with Christmas. In fact, the only people spending this Christmas in space are those on board the International Space Station (ISS).

Every Christmas since 2000, someone has been spending it in space

The ISS is a space station in low Earth orbit that has been put into orbit in 1998 and crewed ever since 2000. There are always people on board the ISS meaning that every Christmas since 2000, someone has been spending it in space. ISS expeditions tend to be around six months long, so it is not guaranteed that if you go on the ISS, you will also spend Christmas there. However, in some circumstances, a crew member may remain for much longer than this. The record for the longest time spent in space is held by Valeri Polyakov who spent 437 days on the Russian space station!

So what happens on the actual day? Well, it turns out that crew members enjoy decorating and getting in the Christmas spirit. The extent of decorations depends on the crew members however it is not uncommon to see a small Christmas tree onboard the ISS. They are allowed to bring a small number of personal belongings when boarding the mission, therefore if they know they will be in orbit over Christmas, these belongings tend to include Santa hats and some festive treats. Of course, due to the gravitational field being vastly different than on Earth, the crew members are quite limited to what foods they can bring and eat. A full traditional Christmas dinner is off the cards but some festive foods such as smoked turkey are still possible to eat.

Also, if there are any Russian crewmembers on board, which there usually is, the crew gets the joys of celebrating two Christmasses. This is because according to the Julian calendar which is used by the Russian Orthodox Church, Christmas falls in early January.

As festive as Christmas on the ISS sounds, it is not all fun and games. The crew are there to work and have a very tight schedule. They must carry out experiments, maintain the station and follow a strict exercise regime to keep their bodies working properly under zero gravity. This means that although they get some time off on Christmas Day, the work does not completely stop.

If your family get on your nerves this Christmas (for instance by trying to convince you that brussel sprouts are nice), try to remain grateful for them because some people will be spending Christmas 420 kilometers above Earth. And if you do decide to become an astronaut, make sure you get along with your crewmates.