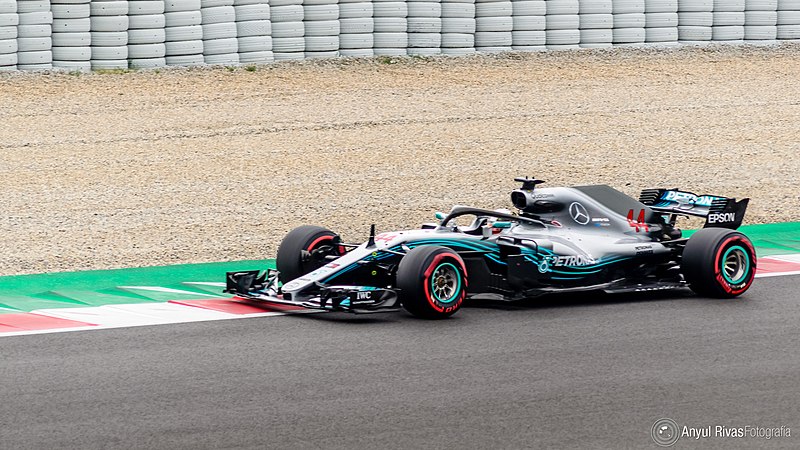 Lewis Hamilton won the debut Qatar Grand Prix with a confident and assured dive, narrowing the gap between him and championship rival Max Verstappen to just eight points. Verstappen could only muster second, a solid result after a good recovery drive, but he was never at risk of troubling the Mercedes driver.

Hamilton qualified on pole – Verstappen was second, but dropped to seventh after a penalty for missing yellow flags in qualifying. The Mercedes driver controlled the race from the off, and Verstappen was behind him again after five laps, but the gap only grew. Verstappen pitted on lap 17, and Hamilton followed a lap later – they repeated this pattern again on laps 41 and 42, and at this point it was clear that only an error would deny Hamilton the win. That wasn’t going to manifest and, with a huge gap to third, Verstappen had a final late pit stop for new tyres to bank the fastest-lap bonus point.

Things proved a little more exciting down the field. Fernando Alonso climbed to third (qualifying in fifth), and he faced Sergio Perez in the final six laps of the race to defend his place – Alonso was on old tyres, while Perez had been pitted about ten laps prior for the second time. The Spanish driver benefitted from a virtual safety car with two laps to go, securing his third and his first podium finish since 2014. The top five was rounded out by Perez and Esteban Ocon.

Tyres were on everyone’s mind after the fate of Valtteri Bottas. He also picked up a grid penalty, but a poor start saw him drop to 11th – he had a strong recovery drive, but he pushed his tyres after Perez pitted, and it didn’t go well. He suffered a puncture on lap 31, and eventually dropped out of the race with 10 laps to go. With Bottas failing to finish, Mercedes’ lead in the constructors’ championship is now just five points. Lando Norris, George Russell and Nicholas Latifi are suffered punctures too, with the latter having to drop out on lap 50. Norris did eventually finish ninth, while seventh- and eighth-place finishes for Carlos Sainz and Charles Leclerc strengthened Ferrari’s hold of third-place in the constructors’ championship over McLaren.

After the race, Hamilton said: “It was pretty straightforward – it was pretty lonely at the front – of course I enjoy those races where you are battling through but we needed those points today. A solid job from the team with pit stops and the car, and I can’t wait to watch the replay of the race to see what happened behind me.”

“I’m not sure why people’s tyres were going – I’m sure it’s the curbs but I’m grateful for these points. It has been a hell of a year and to be at this point in the year and to have back-to-back wins is a great feeling – puts us in good place for the next two. I’m really happy with the car and I’m fitter than I’ve ever felt – bring on the next two.”

Verstappen said: “Our starting position was a bit compromised but luckily we had a really good start. I got quite quickly back to second and to get the fast lap was very nice. It’s going to be difficult to the end but that’s nice, it keeps things exciting. This track is a lot of fun to drive. it’s really quick. I feel good, it’s going to be a tight battle until the end.”

Alonso said: “It has been nearly 10 years but we have finally got it and we were close in a couple of races, but here today I thought I could be leading and I am so happy for the team.

“We planned a one-stop from the beginning, but we never knew how bad the wear was going to be – the race was well executed and the pit stop was fantastic and the team was great. I was waiting so long for this, so I am happy.”

The battle for the championship is going down to the wire – there are now only eight points in it, and either man could wind up winning. However, we’ll all have to take a weekend off before the final two drives of the season, beginning with another new circuit in Saudi Arabia on 5 December. Given how tense relationships between Mercedes and Red Bull have been, though, expect we’ll still see a fair bit of drama in the meantime.