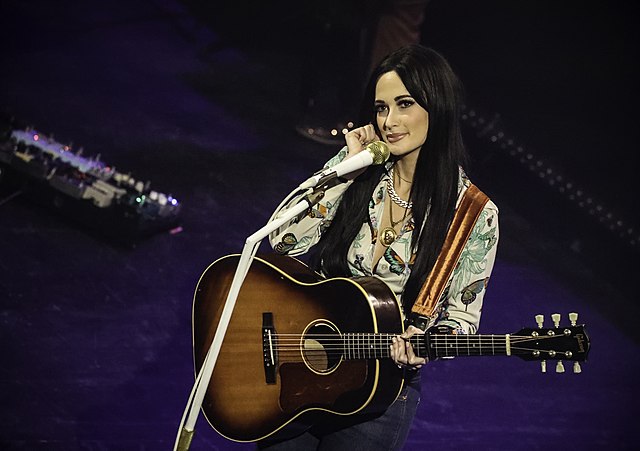 In 2018, Kacey Musgraves was riding high – she’d been married to singer-songwriter Ruston Kelly for a year, and that love inspired the multiple Grammy-winning album Golden Hour. But as her star rose, her marriage struggled, and she eventually divorced Kelly in 2020. With Golden Hour inspired by the couple’s love, it was widely anticipated that Musgraves’ fourth studio album would deal with the fallout, and so it has. star-crossed is an emotional mediation on lost love, boasting her trademark gift for evocative lyrics as the singer guides us through the collapse of a relationship.

Despite Musgraves saying in one of the songs that “healing doesn’t happen in a straight line”, there is some sense of narrative running through the album – from romantic confusion to falling out of love, grieving for the lost love, and attempting to pick yourself up again. Prior to its release Musgraves described the album as a “tragedy in three parts”, inspired by Shakespeare and Greek stories. Although that may be a little superlative, it’s clear how those inspirations have shaped this work. Sadly, this structure leaves little space for the opening number, the eponymous ‘star-crossed’, an overture of sorts that just doesn’t land musically or fit with the rest of the album.

The album finds Musgraves struggling to be a ‘good wife’, a slightly over-electronic number apparently linked to a time when the singer thought a shot of enthusiasm could save the relationship. In ‘simple times’, Musgraves reminisces about being a kid because “because grown-up kinda sucks”, while the rose-toned ‘cherry blossom’ sees her using a metaphor of springtime in Tokyo to help her prove her worth in the relationship (a lot of people seem to love this song, but it’s a little too generic pop for my liking).

The singer has transformed her pain into another collection of engaging and emotive tunes, their impact dampened only by excessive electronics and the occasional dud track

star-crossed is strongest in its middle section, with a bunch of songs that balance mourning for the lost relationship with defiance, and which are honest and powerful as a result. In the much-lauded ‘breadwinner’, Musgraves lambasts an insecure man who wants a girl who will look after him financially but still play the trophy wife – the lyrical snark is softened a little by an easy disco beat, but not much. Anger bubbles in the excellent ‘justified’ and turns reflective in ‘easier said’, and emotions conflict in ‘camera roll’ as Musgraves scrolls through old photos on her phone. As much as she looks forward, there’s a sense of looking back and yearning for happier moments. This culminates in one of the album’s standout songs, ‘hookup scene’, in which Musgraves wonders whether the rush to move on to an active dating life after her split was a mistake: “Hold on tight despite the way they make you sad/’Cause I wish I would have known we didn’t have it so bad.”

The album begins to open up and feel more optimistic in the final third, with a series of songs looking ahead to the future. ‘keep lookin’ up’ is by far the most country-inflected song of the album yet not a particularly musically interesting one. However, we move ahead in ‘what doesn’t kill me’, and a brilliant jazz-disco combination in ‘there is a light’, culminates in one of the most exciting flute solos I’ve ever heard. star-crossed concludes with a cover of Violeta Parra’s ‘gracias a la vida’, a song that thanks life for all the joy it brings amid the troubles. It’s a strong closing number, really delivering on the Latin instrumentation hinted at in the opening song and shifting vocal tone in every verse.

star-crossed sees Musgraves continue on a trajectory away from some of the more overt country songs that characterised her earlier work – instrumentally, it feels like her most ‘pop’ record, more so than Golden Hour. There’s nothing wrong with that – artists grow and evolve – and her Southern sensibilities and the soul of her songs both still clearly draw on the country genre. If you’re expecting a country divorce album along the lines of Tammy Wynette’s D-I-V-O-R-C-E or Willie Nelson’s Phases and Stages, you’re going to be disappointed. This is not necessarily a flaw, however, the album is held back far too often by over-reliance on electronics, doubling or autotuning Musgraves’ voice and frequently dulling its natural power as a result.

Although star-crossed doesn’t hit the heights of Golden Hour, in many ways that’s to be expected – the two albums are telling two very different stories, with different sounds and atmospheres. Despite Musgraves singing early on that “golden hour faded black”, the album proves contrary – the singer has transformed her pain into another collection of engaging and emotive tunes, their impact dampened only by excessive electronics and the occasional dud track. Early in the album, Musgraves sings “and the truth is I could probably make it on my own” – on the strength of star-crossed, she already is.