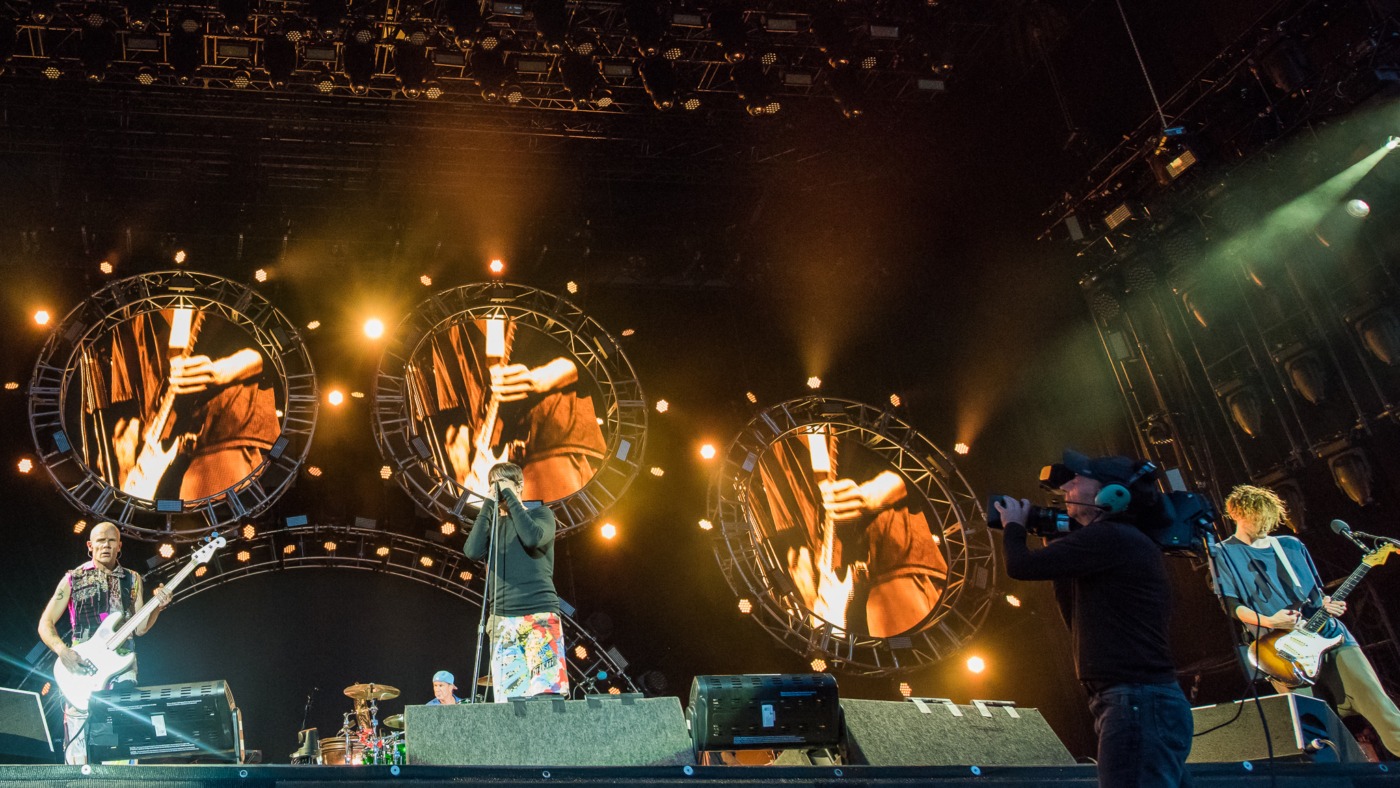 It may have been the Red Hot Chilli Peppers’ 1989 album, Mother’s Milk, that contained the ‘Song That Made Us What We Are Today’ – a thirteen-minute raw and rocking musical masterpiece of a bonus track – but it is certainly Blood, Sugar, Sex, Magik (BSSM) that made the Chilli Peppers the band they are today. Thirty years later, this non-stop fever hop of an album is just as iconic as the day it was released.

The 1980s were rough for the Chilli Peppers. The schoolmates with untold dreams of rockstar mythologies spent years toiling in the college rock trenches, unable to grasp the rock superstardom they craved. After all, their music was too punk to truly be funk, but with just enough funk to avert the punk-rock masses, their ‘socks on cocks’ antics provoked distaste. They weathered incessant line-up changes, none more so than when guitarist Hillel Slovak passed away from a heroin overdose. Even with the release of Mothers Milk in 1989, with guitar prodigy John Frusciante and drummer Chad Smith, the Chilli Peppers seemed unable to interrupt the mainstream.

But that all changed with Blood, Sugar, Sex, Magik. The Chilli Peppers had erupted into worldwide consciousness with their staggering and impassioned fifth studio album that marked a stark stylistic shift away from the oppressive grooves of their early days.

Still driven by funk, and hunting for an elusive groove, the Chilli Peppers remained true to their rambunctious roots with shameless innuendos and a feverish intensity. Yet BSSM is unparalleled. It provides a glimpse of honesty, a chink in the armour of these testosterone-crazed men, and an emotional dynamism previously unseen, all within the framework of Flea’s pulverising bass line, Smith’s bombarding beats, Frusciante’s undulating guitar riffs, and Kiedis’ effortlessly melodic rap-rock verses. Unapologetic, incisive, meditative. BSSM, to this day, is the revolutionary hallmark of artistic greatness.

If the Peppers’ genre cross-pollination had seen them struggle to make their mark in the ’80s, BSSM ensured that it was to be the defining cornerstone of their success forevermore.

Opening track ‘Power of Equality’ is akin to being strapped into a supersonic rollercoaster – one that lasts for the entire 73-minute run time of the album. Kiedis pleads “whatever happened to humanity” in his clumsy yet potent social message against racial injustice in America (a message that is unfortunately just as relevant today). Simultaneously, Flea’s bass and Frusciante’s guitar hiccup euphonically whilst being propelled by Smith’s unrelenting attack to create a multi-textured song that reverberates throughout the landmark album.

Frusciante and Flea’s cosmic connection flourishes in BSSM. Their jams fuse transcendently in ‘Funky Monks’ before rising rapturously into a Hendrixian-style riff that captures the mastery of John Frusciante. At times, it seems that the two instruments are competing with one another in a perfectly complementary yet all-consuming way.

The shock mellowness of songs like ‘Under the Bridge’ act as a cross-generational antidote – both to the sheer potency of the rest of the album but also as an antidote against our loneliness.

Together, these distinct features fuse to reach a climax in ‘Give it Away,’ a staggering bombardment of ecstasy and altruism that captures the essence of BSSM. The rapid-fire rhymes layered with melodic grooves and striking beat compel you to sit, stunned, whilst the relentless wave of energy enthrals you. To this day, ‘Give it Away’ remains one of the Chilli Peppers most iconic and intense songs.

But BSSM’s true success rests in its raw and honest reflection. The band that had once released ‘Super-Secret Song Inside’ (known affectionately as ‘Party on Your Pussy’) gained meaning, employing a greater artistic scope than before, and allowing the darkness of their personal struggles – from drug addictions to losing their beloved Hillel Slovak – to bleed into the album. BSSM is cathartic and in being so allows thrilling art to be created.

This vulnerability is most notable in ‘Under the Bridge,’ the Peppers’ most successful song. Here, you can seek refuge from the ferocity of the rest of the album with the minimalist acoustic guitar tenderly caressing Kiedis’ sincere poetry. Few will relate to the debilitating drug addiction that inspired the poem-turned-song, but everyone has a day that they don’t ever want to feel like again. Thus the newfound humility provided by the song appealed to the masses. The shock mellowness of songs like ‘Under the Bridge’ act as a cross-generational antidote – both to the sheer potency of the rest of the album but also to our loneliness. We may feel that we do not have a partner, but we can still, thirty years later, be consoled by the idea that we never really face our struggles alone.

Furthermore, the pathos used in this album widened the musical horizon for the Chilli Peppers. This encouraged them to drop the self-assured façade from time to time to release stunningly poignant songs such as ‘Scar Tissue’. Commenting on the lead single from the Peppers’ last album, The Getaway, Kiedis discussed “how much creativity and growth and light comes out of those difficult struggles”, a realisation that no doubt originated from BSSM.

The release of BSSM on September 24 1991 skyrocketed the Chilli Peppers through the charts, but also too close to the sun. The immense success proved too much for Frusciante, forcing him to follow a path perilously close to that of the Peppers’ previous guitarist. Eventually, he quit the band during their world tour in 1992, leaving them in disarray. Though Kiedis and Flea were able to hold the band together, it is only by riding the coattails of BSSM’s triumph that the Chilli Peppers survived the ‘90s. That is, until Frusciante returned to help the phoenix rise once again from the ashes with Californication.

As an album, Blood, Sugar, Sex, Magik can only be described as fizzing – fizzing with an energy and an artistic understanding greater than can be mortally perceived.

The eternal legacy of this “revolutionary, beautiful, artistically heightened, incredible record” (in the words of a young Frusciante) continues to excite, and with Frusciante’s return to the band in 2019 and a record release imminent, Blood, Sugar, Sex, Magik remains the standard to beat, thirty years later.