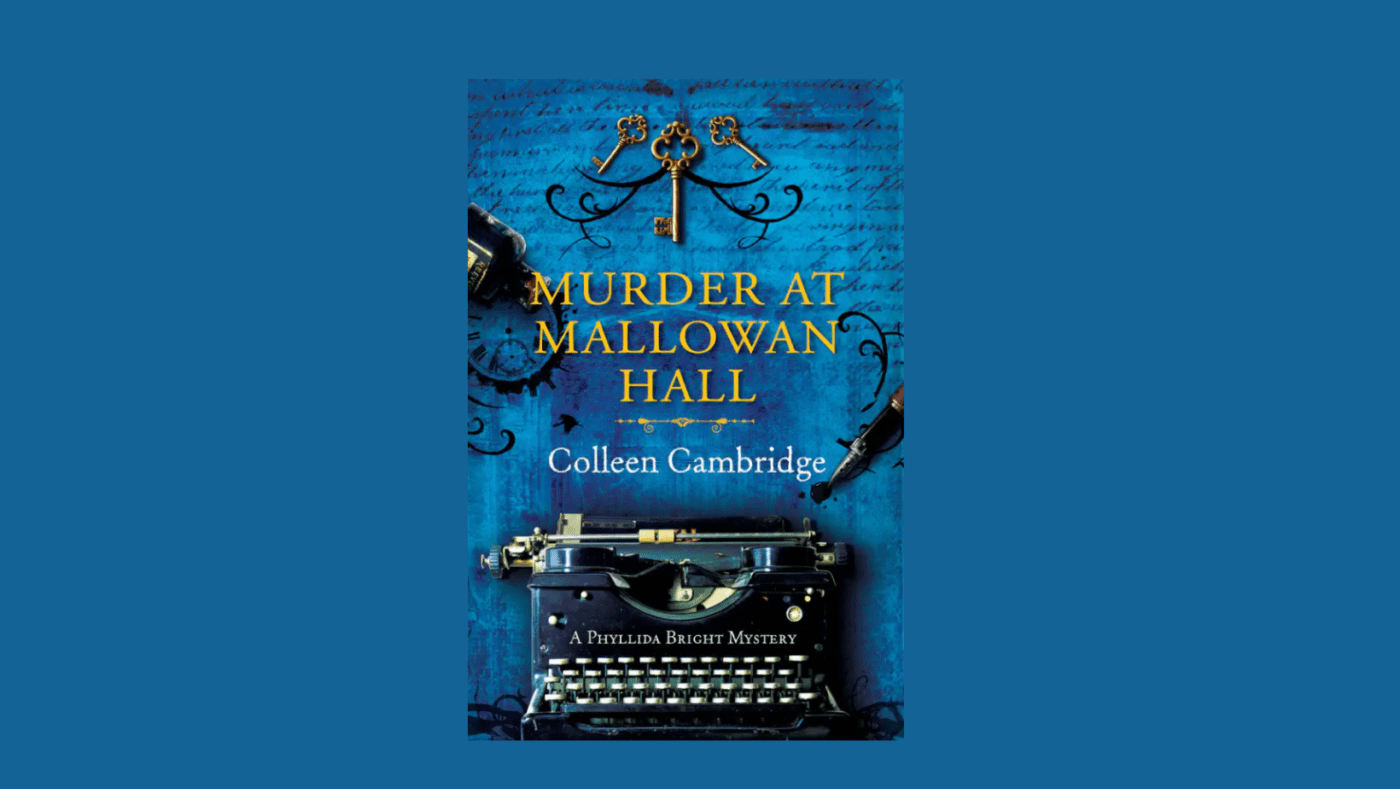 I’m a huge Agatha Christie fan – I’ve read all of her books and watched pretty much every adaptation of her stories. When it comes to crime fiction, she is – in my humble opinion – the best there has ever been. But, to my knowledge, there’s never been a murder mystery that featured the ‘Queen of Crime’ as a character. Until now, that is. Murder at Mallowan Hall, the debut novel by Colleen Cambridge, features many of the classic Christie tropes as it tells an engaging murder mystery with a solid lead detective. A few minor fumbles doesn’t prevent this from being an enjoyable read.

It’s the 1930s, and Phyllida Bright is the housekeeper at Mallowan Hall, a picturesque country house in Devon, owned by the archaeologist Max Mallowan and his famous wife Agatha Christie. One morning, Phyllida awakes, and is surprised to find a body on the floor of the library. The victim, a man called Charles Waring, arrived at the house the night before, in what it swiftly transpires were false circumstances – it seems that no-one knew him, and there is no apparent motive for his murder. Phyllida, a fan of her employer’s works, takes it upon herself to investigate the case and find out the truth about Waring’s murder. However, the demands of running the household, and the fact the murderer is still on the loose, threatens to complicate proceedings.

Cambridge’s prose brings the house and its operations to life, and it’s impressive to reflect that, with so much happening, a large chunk of the narrative takes place in just two days

When I saw the plot summary for this book, my immediate concern was whether the author would milk the Christie connection too much – fortunately, Cambridge hits it just right, and has faith enough in her own strong writing to let it stand largely on its own. The ‘Queen of Crime’ appears in a few chapters (in all honesty, her presence doesn’t really matter at all), so our guide throughout Murder at Mallowan Hall is Phyllida, an indomitable presence whose curiosity and sense of her job ring through. Much though she compares herself to Christie’s sleuths, she is her own character – a former medic during the First World War who is bright, and doesn’t brook any nonsense.

There are two stories going on here – the murder mystery, and a well-researched look at the operation of a country house in the 1930s. I find them both very enjoyable, the two plot strands are both well-balanced and centred around the character of Phyllida, a fun character who I’d be happy to spend more time with in future books. Cambridge’s prose brings the house and its operations to life, and it’s impressive to reflect that, with so much happening, a large chunk of the narrative takes place in just two days.

That sense of life translates to the major supporting players. We begin the book learning of Phyllida’s almost-adversarial relationship with the house’s butler, Mr Dobble, a man with his own opinions of how a housekeeper should look and act that do not align with his opposite number. She then spends some time with Detective Inspector Cork, a man gloriously described as looking a little too young to be good at solving crime, but the most intriguing relationship is the one she shares with new chauffeur Bradford. The chapter in which they meet is one of the highlights of the book, and I liked the way that their mutual distaste evolved into a grudging respect. Crime fiction is full of unlikely double acts solving cases, and I think we could have a new one here.

At the end of the book, Phyllida gets to engage in her own version of the famous Christie denouement, and it’s here that I feel that the major weakness of the book lies. As Cambridge listed the characters who’d gathered in the study to learn the truth, I realised that I didn’t actually know many of them at all – this is a murder mystery in which we don’t really spend much time with any of the suspects at all, nor really have the opportunity to pick at their motives and characters. Don’t get me wrong, I thought the solution was fair – the clues were well laid-out, the deductions really clever, but the reveal of the motive was somewhat strange.

Crime fiction is full of unlikely double acts solving cases, and I think we could have a new one here

Murder at Mallowan Hall is an exciting debut in the Phyllida Bright series. It’s a fun murder mystery with an engaging lead character (and some fun side characters), solid plotting, and a novel hook with the Christie connection. I’m looking forward to Colleen Cambridge’s next instalment – I’d definitely love to see Phyllida at work cracking a few more cases – but for now, I’ll recommend Murder at Mallowan Hall to crime fans.

Murder at Mallowan Hall, published by Kensington Books will be available on 26 October 2021. My thanks to Kensington Books for providing me with an Advance Reader Copy, in exchange for an honest review.