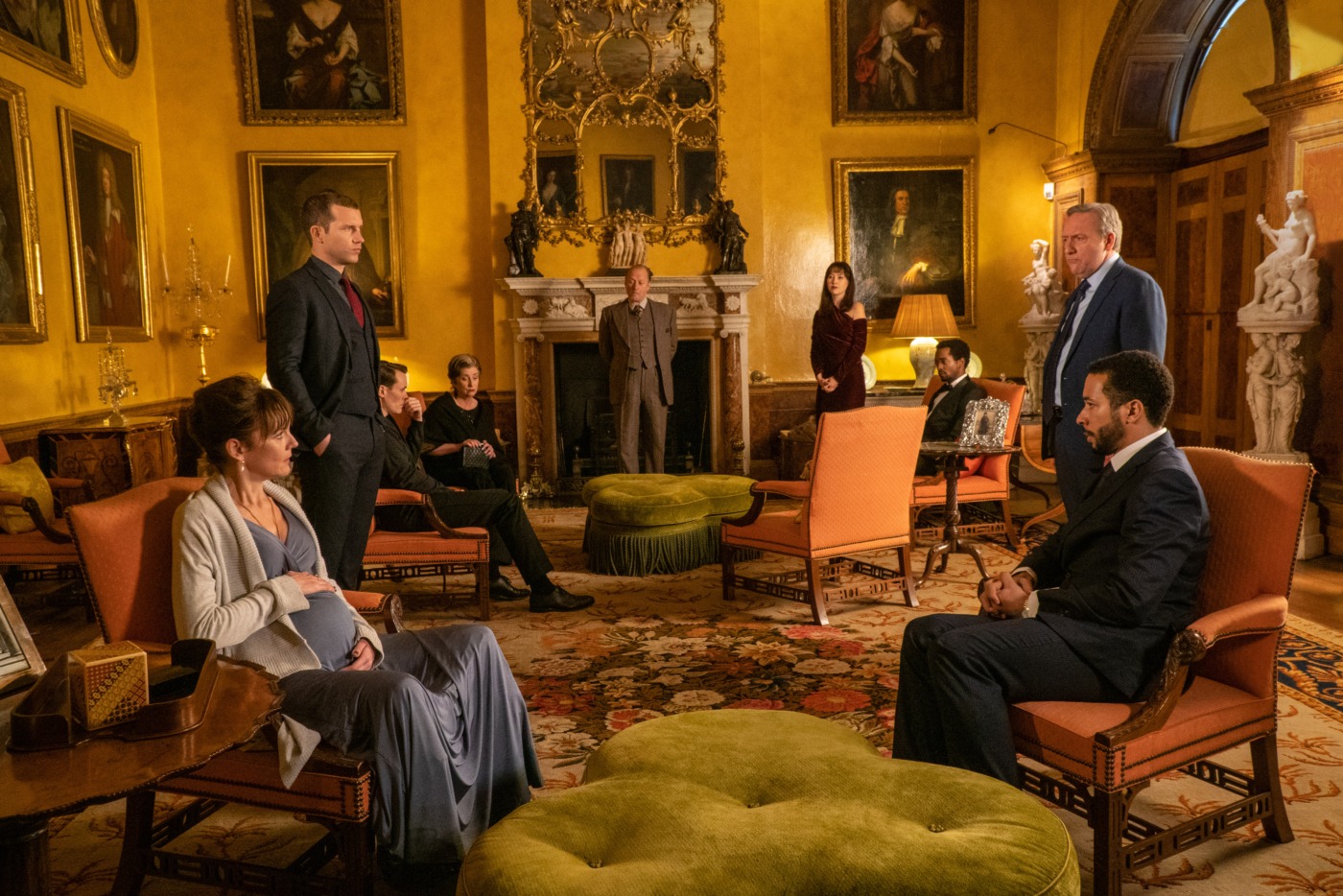 With Endeavour’s eighth run wrapped up, we were treated to another slice of ITV crime fare – a new instalment of Midsomer Murders. This episode is a one-off in a number of ways: there’s no date scheduled for the remaining episodes, but it also does a lot differently from a usual Midsomer instalment. And I like it. It suffers from some of the plotting issues that seem to befall all modern Midsomer Murders, but it’s an innovative and enjoyable episode.

The owners of the famous Karras Games company gather at the family’s house on a private island to mark patriarch Victor Karras’ (Stuart Milligan) 70th birthday. An immersive murder mystery game is arranged for entertainment, but things take a turn for the deadly after Victor stumbles down the stairs and is impaled by an Egyptian spear. What looks to be a tragic accident becomes a murder investigation after Fleur (Annette Badland) reveals that the fall was due to cyanide poisoning – the intimacy of the setting means the killer must have been someone close to Victor. Barnaby (Fiona Dolman) and Winter (Nick Hendrix) look into the crime, but their investigation takes a turn after stormy weather washes away the only means of transportation off the island, trapping the detectives with their suspects and the killer.

By trapping everyone in one location, the episode becomes more Agatha Christie than usual, and all the puzzles give it a definite Jonathan Creek vibe

‘Happy Families’ is a very different Midsomer. By trapping everyone in one location, the episode becomes more Agatha Christie than usual, and all the puzzles give it a definite Jonathan Creek vibe (helped by a number of familiar faces from the show). 22 series in, it’s a pleasure to see the show trying new things, and it’s even better when they actually work. This episode feels like a proper whodunit with lots of questions to answer – some of them will be solved by the viewers far before Barnaby and Winter get there (if you can’t figure out where a missing document is, you’ve never seen a mystery story before), but I think that adds to the charm.

Any cosy mystery like this needs a solid cast of characters, and ‘Happy Families’ doesn’t disappoint. The standout is Adrian Edmondson as Hugo Welles, the actor who plays the detective in the murder mystery game and thus fancies himself as on Barnaby’s level. He’s responsible for many of the comedic moments in this episode, and only infrequently errs on the side of ‘a bit too much’. Rachael Stirling is a reassuring presence as Victor’s widow Eleanor, and I liked Vanessa Emme as Victor’s efficient daughter Danni. Really, there’s only one weak link among the cast – the character of Noah Adomakoh, who barely adds anything to the story at all. When you’ve got such a necessarily small cast, it’s a shame that they aren’t all used effectively.

The writing works well, with a fair mystery and some interesting characters, but that’s not to say that there aren’t issues.

I enjoyed the atmosphere here, with great direction by Audrey Cooke, and the music was effectively different – from the off, as storms envelop Midsomer, this feels like a darker affair than usual, even though it looks stunning as usual. In his third script for the show (after the middling ‘The Lions of Causton’ and ‘The Point of Balance’), Nicholas Nicks-Beach puts forward by far his best Midsomer outing. The writing works well, with a fair mystery and some interesting characters, but that’s not to say that there aren’t issues. I found the reveal of the murderer effective and it’s certainly possible to work it out, but the motive is essentially kept from us all episode and it’s very weak when it’s finally revealed. Some of the clues are a little too fortuitously delivered to Barnaby, which is frustrating when the deductions are actually really good. And there’s a subplot with Sarah that comes out of nowhere, and is both revealed and resolved in two minutes at the end – there’s not really any point to it.

Overall, ‘Happy Families’ is a fun Midsomer that largely succeeds in doing something different. It’s distinctly Midsomer while paying homage to the crime genre of the past, and it lands well. Midsomer Murders steps a little outside of its comfort zone, and delivers one of its best recent instalments in the process.