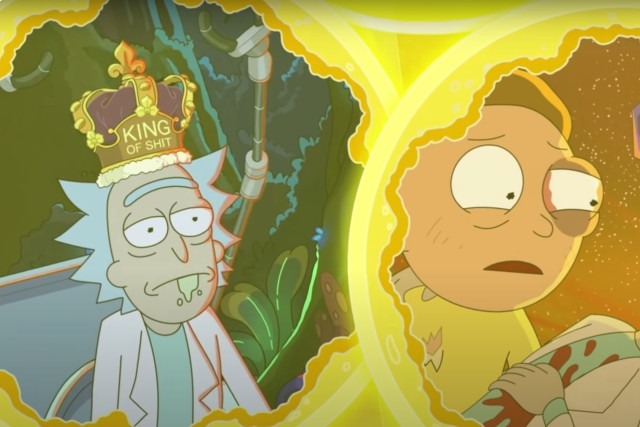 After a few weeks away, Rick and Morty finally returned for the two-part finale to its fifth season. ‘Forgetting Sarick Mortshall’ and ‘Rickmurai Jack’ are concerned with crows and character relationships, and they really work. These two episodes deliver a lot, expanding our knowledge of the show’s world and advancing the Rick-Morty relationship more than ever before. After a mixed series, Rick and Morty definitely goes out on a high.

In ‘Forgetting Sarick Mortshall’, Morty and Rick’s relationship finally hits breaking point. Morty is tired of being disrespected and decides to head off on his own after Rick chooses to replace him with a joke sidekick – two crows – to underline how little his grandson means to him. Morty gets involved with a new partner, an old acquaintance of Rick called Nick, after an accident involving portal juice, while Rick pushes the crows joke as far as it can go and ultimately realises something horrible about his relationship with Morty.

This episode feels like the natural culmination of Morty’s arc

Throughout my blogs, I’ve reflected on the Rick-Morty dynamic, and the ways that Morty has evolved. This episode feels like the natural culmination of Morty’s arc. He says enough is enough, and tries to walk away. Both stories – Morty and Nick, Rick and the two crows – see the characters deal with the end of this abusive relationship in different ways, and they feel really earned. The way Rick’s story plays out in particular is proof that the show can do exceptional character work when it wants to.

The portal mix-up feels like a really novel idea (I shan’t spoil the exact dimensions), and some fight sequences using the idea are really clever, showing that Rick and Morty can still pull this level of uniqueness out of its hat five series in (and we even fit in an entertaining Jerry bit, the only real use of the Smith family all finale). It’s a shame, then, that this doesn’t translate to the two crows half of the episode, which is weird and too flimsy to hang much on. It’s not overly funny, and though I like the eventual resolution, the journey there is a weak one.

Onto ‘Rickmurai Jack’, the second part of this finale. Rick has become the star of his own anime-inspired adventure, undergoing a series of endless quests with his two crows. Morty transforms himself into a middle-aged man in an attempt to guilt-trip Rick into coming home – he fails, but circumstances see the pair reunite. In order to fix Morty’s transformation, the duo head to the Citadel of Ricks, for a simple adventure that eventually sees them butt heads with Evil Morty.

This final episode is about scale, and about lore, and it delivers both successfully. A lot of fan theories about Rick are confirmed or denied as we dig into his backstory in the kind of clever exposition dump the show excels at. It works because Rick is constantly lampshading how unnecessary all of this information is (indeed, in a fourth-wall-breaking move, Rick says they’re only doing it so people will stop asking). The episode also thrives in how it boasts genuine stakes – there’s potentially a resolution to the Evil Morty storyline, and the end of the episode gives us dramatic ramifications for series six, whenever it rolls around.

This two-parter is concerned with character development and expanding the show’s universe, and it succeeds on both counts

Fortunately, the crow nonsense is dealt with very quickly (through a genuinely amusing character called CrowScare), and we move onto the meat of the episode – the relationship between Rick and Morty. ‘Rickmurai Jack’ succeeds in both building on the groundwork laid in ‘Forgetting Sarick Mortshall’ and pulling some surprising reveals out of the bag that again recontextualise this partnership. The revelations we get here are significant, yet they somehow feel true to the characters too.

This finale is a mixed affair. Although it boasts some good lines, it’s not overly funny, but that’s not really its focus. This two-parter is concerned with character development and expanding the show’s universe, and it succeeds on both counts. It’s a high note on which we end a series that has been decidedly mixed, and although the episodes do fall prey to some of the fifth series’ recurring issues, I think they’re both really enjoyable and perfect for the fans.