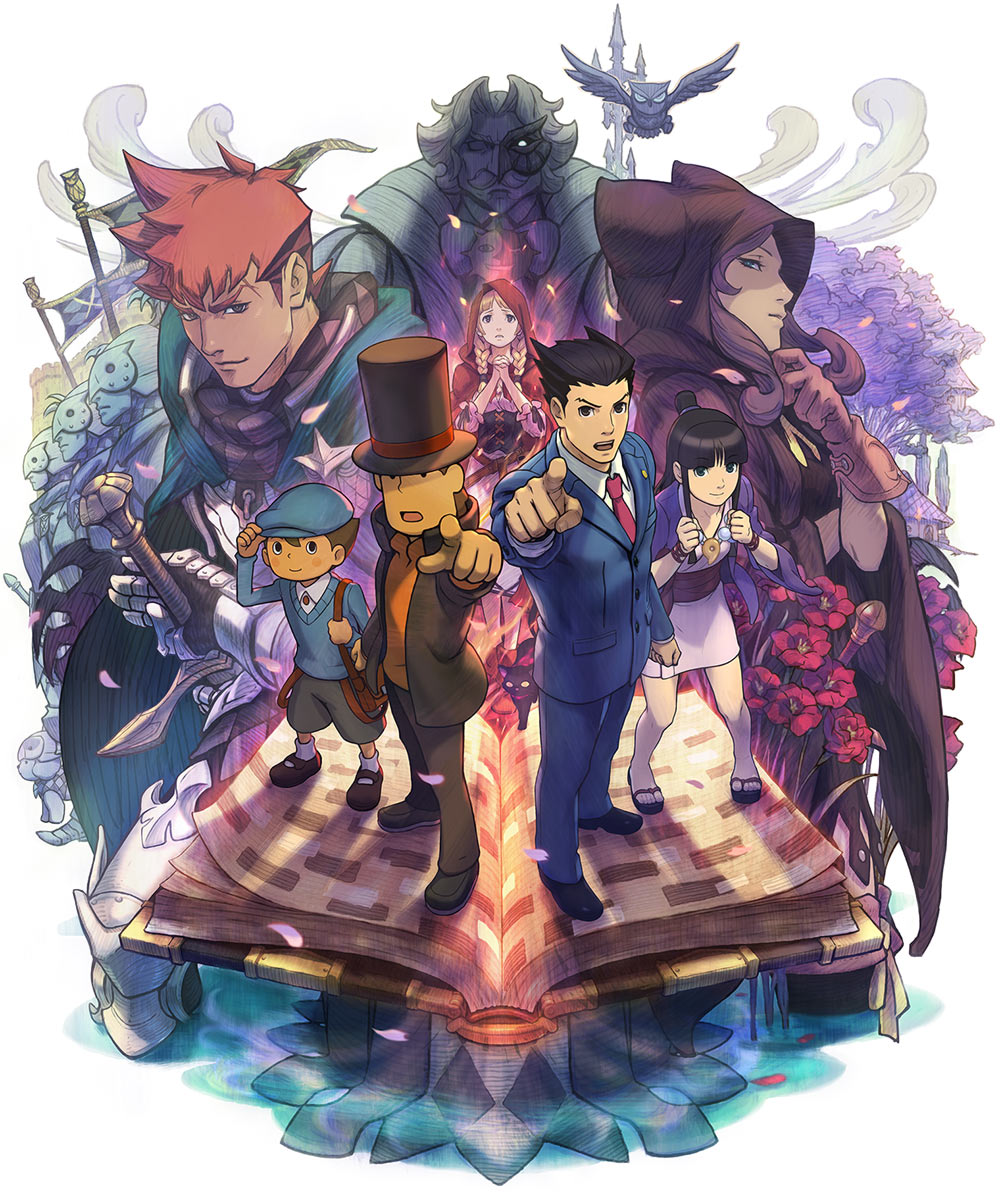 Welcome to part three and the 3DS era of Layton. Professor Layton and the Miracle Mask never received an official OST release, which is sad, as this hides some of the best music in the entire Layton universe. Thankfully, the internet and Layton fandom is amazing, and there are plenty of OST compilations of the games online. In a game steeped in weirdness and wackiness with clowns, carnivals, miracles, and masked men, it hides a rather hard-hitting story and backstory for Layton. The music does this justice, as Level-5 seemed to throw every tragic plot occurrence into Layton’s past, and as a true gentleman, he copes through it all (yet technically at this time he has no clue what will happen with the events of Lost Future).

The opening theme, ‘The Mask of Miracles‘, sets the tone for the game – fun, but mysterious. ‘Puzzles Abound‘ is one of my least favourite puzzle-related tracks, but still good, whereas the latest reimagining of the puzzles line, ‘Puzzles!‘, is perfect – the slight echo and reverberation fits the carnival theme very well. ‘Monte D’Or Carnival Night‘ is such an upbeat but mildly concerning waltz for the carnival, establishing the dread and concern for the upcoming miracles of the Masked Gentleman. ‘The Gentleman’s Theme‘, which fits our villain perfectly, readies you for the upcoming miracles. The waltzing accordion of ‘Monte D’Or City of Miracles‘ creates the atmosphere to roam while placing a small sense of unease into the background of the piece – fitting for a carnival town plagued by ‘miracles’. ‘Stansbury Halcyon Days‘ and ‘Stansbury Moonlit Knoll‘ are two standout tracks for the countryside theme, and set up Layton’s hometown flawlessly.

The music does this justice, as Level-5 seemed to throw every tragic plot occurrence into Layton’s past, and as a true gentleman, he copes through it all

Now we are in backstory territory, it is time to mention ‘Akbadain’s Ruins‘, ‘Akbadain Breakthrough‘, and ‘A Time For Battle‘, which are all amazing – but don’t worry, I won’t spoil anything. Another stellar track is ‘Pain‘, delivering exactly what it says. But back with the creepy and unsettling carnival music, ‘Pumpkin Park‘ is often highlighted. For the general Layton dose of creepy, we have ‘Reunion Inn‘ fitting the needs of events, and then we get, like clockwork, Descole and his theme again. The order of sadness is fulfilled by ‘A Treasure That Lasts‘ – the strings really do draw you in. But a Layton game wouldn’t be complete without some epic or evil track, and with the introduction of a certain someone with ‘Theme for Targent‘ gives exactly that. I feel this is often overlooked as a theme, but the building swell really sets the tone for this plotline. Now we reach the end, with ‘Mysterious Flower‘ serving as our ending theme, which is another beautiful piece of music to tie off this Layton game.

Though the Layton-Phoenix Wright crossover was released next, we in the West didn’t get to enjoy this until after the close of the prequel trilogy due to localisation timings.  So, we now come to Professor Layton and the Azran Legacy. ‘The Azran Legacy‘ title theme opens broody, before shifting to upbeat and adventurous – all within an air of mystique, fitting for your globe-trotting adventure aboard the airship Bostonius with Professor Desmond Sycamore and his butler Raymond. One of the most relaxing pieces must be ‘The Silver Peaks of Froenborg‘ – just don’t get this mixed up with SilvaGunner’s joke remix of Froenborg, although that is itself an achievement of musical arrangement and trickery worth its own listen. See if you can realise what themes are actually used to concoct a Layton-esque composition which has fooled many on YouTube!

Puzzle-wise, we have ‘Puzzles Abroad‘, using the signature chime base – now with added strings and of course, our classic puzzle music with ‘Puzzles!‘ to keep you stressed and engaged in equal measure. One of my favourite tracks, which I once tried to arrange, is ‘Airship Chase‘, which combines frantic strings over the top and piano chords to sell the tension, but also the fun of the chase segment. It deftly moves between these sections and where the repeating piano line takes over, with bass strings underneath and vice versa then melding them together. ‘The Lakeside Town of Kodh‘, ‘Echoes of the Past‘, ‘The History of the Village‘, ‘The Jungle Village of Phong Gi‘, ‘San Grio Island of Happiness‘, ‘Norwell‘, and ‘The Dusty Town of Torrido‘ all deserve their mention for being able to create the atmosphere of so many varied places across the world as you journey in search of the five Azran eggs and the mystery behind the ‘living mummy’.

It is times like this I ask: why does Layton of all series get such amazing soundtracks?

‘London Streets Remapped‘ is another beautiful piece with a music box-esque backing before you move into a transition section with violins before an orchestra slowly builds, with each section bringing in a new set of instruments and solo line. ‘London Streets Remapped’ epitomises the Layton series and its music – building from humble beginnings with a music-box-feel culminating in a grand orchestra. A staple since the beginning – what would Layton be without a French-aura-inducing piece as we have with ‘Searching for Clues‘, or its idyllic countryside music this time with the blissful ‘The Windy Village of Hoogland‘? If you ever dreamed of living in the idyllic world of the countryside, these games certainly make you dream more. Every Layton mystery must be solved, and ‘The Professor’s Deduction‘ is another masterclass in setting music to Layton’s brain cogs whirring. We also have the tense and aptly disconcerting ‘Targent‘ for our villains this time. Again, I shall spoil nothing, especially about Targent – play the games!

Continuing our tour of required Layton moods, we are given tragedy and sadness in ‘Warmth and Kindness‘ and ‘A Tragic Fate‘, then a sense of awe, wonder, reflection, and underlying dread with the theme for ‘The Azran Sanctuary‘. But don’t forget our Descole, our masked and caped recurring nemesis in the prequels – he’s in this game, somewhere, but I won’t tell, bringing his theme back one last time. Then, we say goodbye to Emmy as she renounces her position as Layton’s assistant, leaving Luke to have the professor to himself, until they meet Flora as they set off to solve an inheritance dispute in the Laytonmobile after the end of Azran Legacy. To close the prequels – and the last good mainline Layton game – we have ‘Surely Someday‘. Surely someday, we will see another proper Layton game, perhaps. Surely Someday and Time Travel, which close their respective trilogies, are two of the best and most emotional songs. It is times like this I ask: why does Layton of all series get such amazing soundtracks, and ask how they evolved from the limitations of the DS and an origin in Akira Tago’s puzzle books to grand orchestral arrangements and live performances?

The music [of Layton vs Pheonix Wright] is the pinnacle of both franchises with Layton music, Ace Attorney music, and original music all in one place

While the main Layton saga ends with Azran Legacy, this isn’t it for our professor. Professor Layton VS Phoenix Wright: Ace Attorney was a crossover I didn’t expect to happen – but it did, and it was certainly worth the year’s wait for localisation. The music is the pinnacle of both franchises with Layton music, Ace Attorney music, and original music all in one place. Many classic tracks are rearranged for this game from both series, making a museum to two titan game series. I even bought the Japan CD soundtrack for the game as it was that good. ‘The Main Theme‘ is an amazing and grand opening to this game. The game involved Layton’s puzzles and exploring and Ace Attorney’s court cases and interrogations within a setting of witches, witch trials, and a Storyteller whose word is law. It feels like an eclectic mix of a game that shouldn’t work – yet it really does.

‘Puzzles 8‘ fits the puzzle music requirement perfectly. ‘Labyrinth City‘ – the theme for the main setting – is a mildly unsettling and mysterious waltz that creates an atmosphere of a city plagued by magic and witches. Creepy forests seem to appear rather frequently in Layton games, and this is no different with ‘Forest‘. Tomohito Nishiura and Yasumasa Kitagawa, along with Yumiko Hashizume and Norihito Sumitomo, crafted an amazing work of art. We got the usual arranged pieces of music, but also cinematic orchestral music for the cutscenes, and the marvellous opening and ending. We get an interesting and fancy rendition of ‘Layton’s Theme‘ for this game, as well as ‘The Professor’s Deductions‘ and ‘Tension‘. An original piece that reminds me a bit of ‘Airship Chase’ is ‘LINK‘, and for yet another tower in a Layton game, ‘The Storyteller’s Tower‘ is an exceptional, simple, but atmospheric piece.

We also have the Ace Attorney music to talk about, of which I would like to highlight some standout compositions. The ‘Moderato‘ and the ‘Allegro‘ Cross-Examination tracks and ‘Pursuit ~Cornered‘, as well as ‘Phoenix Wright ~ Objection! 2012‘ are all amazing pieces. ‘The Great Witch’s Judgement – Trial‘, ‘Pursuit ~ Casting Magic‘, and ‘The Final Witness‘ are a few more. If Layton’s Theme is the classic Layton piece of music, ‘Turnabout Sisters’ is that for Ace Attorney, and we receive a music box version of ‘Turnabout Sisters’ Theme‘ – a beautiful rendition of a classic that, with the music box sounds, melds perfectly within a Layton game. Then we have the original and shared music. ‘Escape‘, ‘Garyuu ~ Roar‘ with its dramatic organ, and ‘Confrontation‘ deserve a mention. We even get treated to a second arranged version of ‘Layton’s Theme‘! Our emotional music requirement is fulfilled by ‘Mahoney’s Theme ~ Truth‘ and ‘DENOUEMENT‘.

Then we reach what I would say is one of, if not my absolute favourite, tracks in the entirety of the Layton franchise – the ‘Professor Layton VS Phoenix Wright: Ace Attorney Ending Theme’. It is a marvel of orchestral game music arrangement, one that fulfils the crossover criteria deftly. It is actually a weaving web of Layton and Phoenix Wright’s classic music. We start with Phoenix Wright’s signature ‘Objection!’, then move into the main theme of the crossover, before ‘Layton’s Theme’ makes an appearance and flows into ‘Puzzles!’, and back into ‘Objection!’, before yo-yo-ing between ‘Layton’s Theme’ and ‘Objection!’ in an amazingly crafted transition. We then reach ‘Cross-Examination’, where the brass enters and swells for a tone shift into ‘Cornered’, bringing us the air of mystery as we traverse the piece after uncovering the truth of Labyrinthia. We then climb musically with bells and a brass fanfare to get to ‘Turnabout Sisters’ Theme’, before sliding back into the games’ main theme to end triumphally. It is no wonder Games&Symphonies chose this ‘Ending Theme’ as one of their pieces to play in concert – I highly recommend you listen to this if nothing else in this series of Layton Music Box articles. Hearing this piece, the memories associated within each piece, and what they are moulded to create is nothing less than 100% unadulterated nostalgia and joy when performed by such a large orchestra.