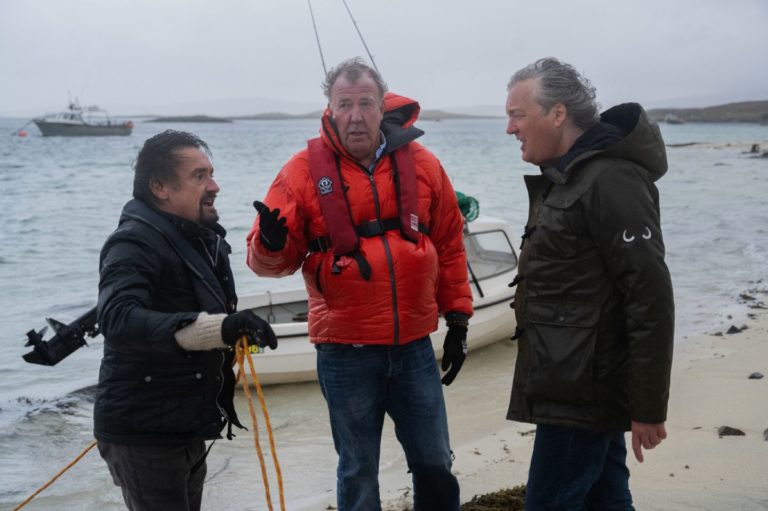 The Grand Tour and the trio of Jeremy Clarkson, Richard Hammond, and James May recently graced our screens again for the new Grand Tour special, Lochdown’– an obvious play on the horrific reality we have lived under the last year and a half. It’s great to see them back again, though on a smaller scale this time. But it is no less enjoyable, with a twist ending that’s so true it hurts.

Lochdown is a massive improvement upon the last special, A Massive Hunt which felt too contrived and scripted for my liking – which was odd as the trio are usually great at hiding the show’s scripted nature. Clarkson’s joke to Hammond about ‘jumping the shark’ in 2013 felt fitting at that point. It was fun and I did enjoy it, and it was visually stunning, but severely lacking.

Lochdown has salvaged The Grand Tour – it was much more fun, and the humour and chemistry were back on point. It feels more at home, with the three now over middle-aged idiots romping through Scotland. The special sees Clarkson, Hammond, and May take three classic American cars on a grand tour through Scotland, with the dreary weather you’d expect, as well as destroying American and Soviet cars in typical fashion. There’s no escaping the hulking elephant in the room – the lockdowns and other restrictions we have suffered under, which the title is an obvious play on – which forces Clarkson into his least favourite past-time, caravanning.

However, they do very well at filming an episode that only has a few tongue-in-cheek references to Covid-19, lockdowns, and the rare sighting of the crew in masks. While the title, premise, and production are intrinsically tied up with the misery of a year with Covid-19 and lockdowns, the special does a great job of making light of it and producing an episode that could be mistaken for an old Top Gear episode.

Watching Clarkson get his Lincoln Continental MK V, Hammond his Buick Riviera Boattail, and May his Cadillac Coupe De Ville through the back and beyond of Scotland is pure fun.

Watching Clarkson get his Lincoln Continental MK V, Hammond his Buick Riviera Boattail, and May his Cadillac Coupe De Ville through the back and beyond of Scotland is pure fun. Even the small stuff like getting stuck in the narrow roads of Edinburgh and the natural banter is refreshing to watch. Then, after their time on the test track and realising how heavy and slow their American cars are, Mr Wilman contacts them to inform them about some random virus or something going around and therefore they can’t stay in hotels. He gives them all caravans, much to their obvious delight.

After a hilarious case of Clarkson’s caravan gaining sentience and flying off the road, and Hammond’s falling off the side of the road, we see them go to find the nearest castle – as they interpret the no-hotel rule as not applying to random ‘abandoned’ castles. It does gleefully show the absurdity and unevenness of the rules we’ve had this last year. The humour is back too. Clarkson’s constant and iconic jokes against the Americans are back, not least because the whole premise is about why American cars didn’t catch on in Britain and Europe. However, they do all ponder keeping their cars, sparking a reminiscence about how few cars they keep, such as Hammond’s iconic Oliver. The Scots don’t escape either, with resident cook May, fresh off his cooking programme, serving up breakfast and dinner in the traditional Scottish way of being entirely deep-fried.

Practical jokes are back with Hammond and Clarkson using a fire engine to pump May’s caravan full of water, much to his surprise when it sweeps him off his feet when he nonchalantly opens the door. The dreary weather and jokes about it make this feel like a Top Gear episode of old, as does the classic May angry shout of “CLARKSOOOON” after yet another prank.

Clarkson, Hammond, and May give us a much-needed unadulterated dose of fun in terrible times.

The challenges are good fun, with a muddy competition to see if the Americans or Soviets made the worst cars. Yet for all Clarkson’s hatred of his Chrysler PT Cruiser, he ends up winning and losing. Seeing them struggle over the concept that to win they had to lose reminds me of the Chernobyl challenge. It culminates in a very angry Clarkson winning and therefore losing.

With the final stretch, they realise how foreign their American cars and Hammond’s American conversion, gun and all, is to Britain, so they set off for Wilman’s American enclave in the Outer Hebrides. The gags and banter along the way are great, including Clarkson’s disgust at Hammond taking up golf.

Building a bridge to the American town has another staple of a sinking ship – Hammond really does have an unlucky touch. I’m surprised they managed to make it over the winding and sagging bridge. I expected when they got to the place it would be a typical “and on that bombshell” moment of finding it either didn’t exist or it was a massive disappointment. Instead, expectations subverted, they do arrive, through the magic of editing, at the American paradise – although with an atmosphere reminiscent of the towns in Hot Fuzz and The World’s End. For good reason, something isn’t quite right in this American sports bar. As a final gag, we find out China has already taken over this brand-new community. Quite the open-ended, timely, hilarious, but depressing commentary on the world.

Clarkson, Hammond, and May give us a much-needed unadulterated dose of fun in terrible times. They deftly resurrect the joy of old and give us a special that is simultaneously steeped in the last year and would fit neatly in any of their old series. It’s great to have them back, and I look forward to their next outing!