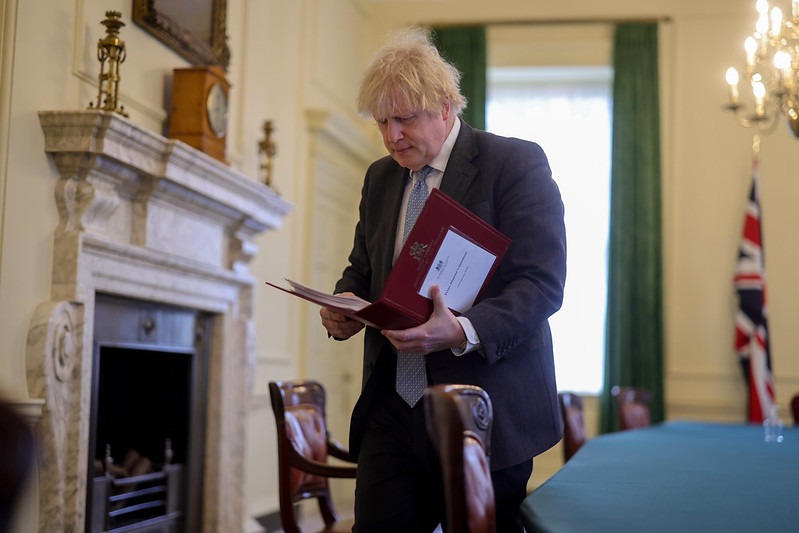 “Boris Johnson eyes another decade in power”, read the front page of last week’s Sunday Times. A rather odd, tone-deaf headline, after he’s spent eighteen months ruining everything he has touched. Johnson has pivoted from the image of populist bombast to managerial metropolitan elite, shifting left on economics and policy and abandoning key manifesto pledges in the process. This is a man devoid of vision. He has been steered by his scientific advisors for so long he has lost what led him to victory in the 2019 election.

Does Johnson have a confident vision, one to get him another decade of power?

One advisor that previously steered the man was Dominic Cummings. He was ousted by Carrie Symonds and Allegra Stratton, along with a purge of Vote Leave from Downing Street, the very people who got Johnson to power. Cummings and Vote Leave had a vision. Johnson’s vision, however, is adopted from whoever is loudest around him, and now that’s Carrie, not Cummings. Cummings had the vision and backbone to attempt to dismantle the Whitehall machine and bring about the only good change this country has seen in decades.

Except now, the visionaries are gone. Does Johnson have a confident vision, one to get him another decade of power? He has thoroughly alienated his core voters and many MPs. He sacrificed his ‘red wall’ winning message in favour of metropolitan green mania, which asks those very voters to make sacrifices in the same breath as talking about ‘levelling-up’. He retains his exposure through the tortured continuation of TV Covid briefings, spreading fear and doom to keep the public in line.

The continuation of coronavirus restrictions is, and vaccine passports were, threatening to tear his party apart at the seams. But as he has reserved himself the right to implement these measures again whenever he feels like it, such as the coming winter, no one, rightly, trusts him. Whitty, Vallance, Ferguson, and Zahawi have shredded any credibility they may once have had and worn themselves into the ground for this man. Johnson himself is merely doing whatever is necessary for power. Cameron may have been the self-proclaimed ‘heir to Blair’, but Johnson is giving him a stiff challenge.

With constant media exposure and an opposition with less spine than Nick Clegg, I have the sinking feeling Johnson could betray everyone who put him in power and still pull it off. The feeling of much of his party is captured in the following cartoons by The Telegraph’s cartoonist, Bob Moran, here and here.

Johnson is Blair and his technocratic elitism, but with a blonde wig and a lesser ability to manipulate the machine

Cummings, for all his egomania, was the man with a vision. Johnson merely eyes power first, vision second. Can he pull it off? Probably. He may have lost his vitality, charisma, and visionary guide and become another cog in the machine his voters hoped he’d destroy, but with the suggestion that he will make the next election about Brexit, he could trick his coalition into re-forming itself.

Johnson is Blair and his technocratic elitism, but with a blonde wig and a lesser ability to manipulate the machine. Their major divergence is their opposing positions on the culture wars that Blair stoked and that became especially prevalent from 2014 onwards in the UK. Does he believe his public stances? I cannot tell. It’s best to chalk it all up to the eternal quest for power. The Conservative Party’s entire history back to the 1800s has indeed been one of betraying its core voters at every turn, but tricking them into re-electing them each time. It’s a tragic masterclass on power.

What Johnson is hoping will save him is to finally confront the beast and go on the offensive rather than the defensive in the ever-growing ‘culture wars’, which in other words merely means politics. He has promoted Nadine Dorries to Secretary of State for Digital, Culture, Media and Sport. Essentially, she will be a culture warrior in chief who sounds exactly like the Johnson pre-2019 that propelled him to popularity up north.

This is important as the rightward fight on culture is a uniting force on his disparate and disintegrating coalition. It plays well with core voters whatever age and the working classes in former Labour seats. He alienated his core and young voters with the Covid managerialism and the working classes with the same, in addition to his metropolitan shift on green and industrial policy.

Johnson seems to want to fuse his leftward lurch on tax rises and state expansion with a rightward lurch on politics and culture. Except, his regime has presided over a massive wealth transfer from young to old, from the middle and lower classes to the well-off. He has alienated his youth voters with the National Insurance rise and refusal to do anything good about social care except make the young pay even more for it. Johnson has picked a cocktail of policies fit to repulse potential voters of every persuasion.

He cannot even confidently say he has the boomer backing that the last eighteen months and tax rises have all been for. The right-wing, conservative, and young voters are shafted with the economic leftward lurch. The elderly, northern, and working-class voters are shafted by the green agenda and metropolitan turn. The former Brexit Party and UKIP floating voters and Vote Leave visionaries were promised a new home in Johnson’s party, one that doesn’t want them anymore. The libertarian-minded public who want the state out of their lives have been discarded with the Covid-authoritarian policy and continuing threats. Why would anyone vote for the Conservatives or any party again? There may be a few good MPs but they’re all complicit in this country’s downfall and none offer a vision to escape it.