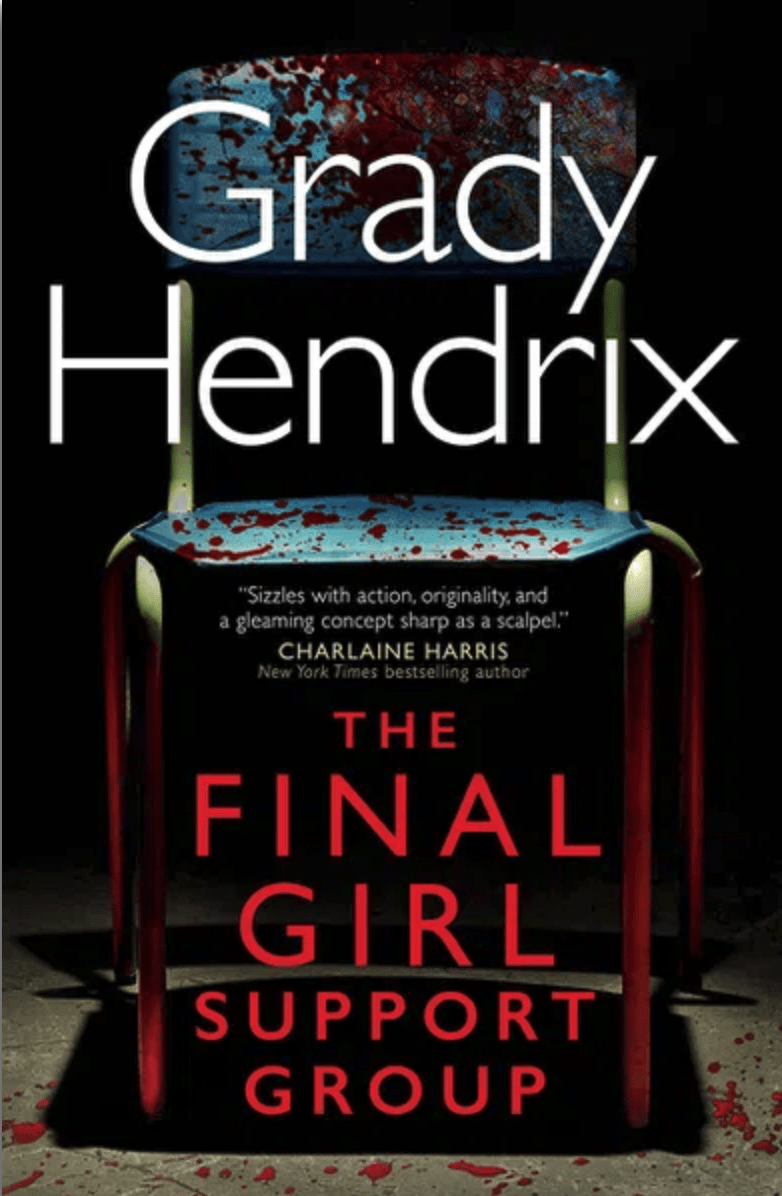 If you’re a horror fan then you’re probably familiar with the term ‘Final Girl’ – the final female character who survives to the end of a slasher film and defeats the killer. Since the term was created by Carol Clover nearly 30 years ago it has become a key idea in horror film and literature, and author Grady Hendrix puts an interesting spin on it in his latest book, The Final Girl Support Group. It’s a fun, pacy read that asks some interesting questions about survivor’s guilt, and what happens after the movies are over, but it suffers from a few flaws that keep it from being essential reading.

The Final Girl Support Group posits a world in which the kind of murder sprees that fill horror films actually happened, and the women who survive them became celebrities for a time. The support group is a monthly meeting of six of these survivors, who have coped with the psychological damage in very different ways. After one of the women misses a meeting, main character Lynette Tarkington comes to the conclusion that someone is staging a well-coordinated attack on all the survivors – she hits the road, hoping to keep her friends safe and expose the killer.

This book was pitched to me as an interpretation of the slasher film genre – a killer skulking around, killing off ‘Final Girls’ one by one. I want to be clear from the off – this is not that book. Instead, it puts us in the mind of Lynette, a flawed woman haunted by what happened to her. In the early chapters, we get a sense of her paranoia, and the extraordinary measures she takes to limit connections and keep herself safe. It sets up a character whose panic and lack of trust feels genuine, especially when things start to go wrong.

There are a few too many twists, and the heavy-handed gender politics stuff at the end feels somewhat out of nowhere and rammed into the motive

Hendrick throws us straight into the action, offering sketches of characters which he manages to flesh out through their actions and interactions – I got a good sense of who all these women were, even as the story kept pounding forwards. I particularly enjoyed Heather, a girl who turned to drugs to get over her encounter with the Dream King, and who now claims to be operating on a different spiritual plane. They’re believable – who would have thought – slasher characters with actual character? Lynette also shares interesting relationships with her houseplant Fine, and a sketchy police officer who helped her out years back, but now has an eye for money.

I do applaud this book for its worldbuilding, and the way it interrogates some of the tropes that underpin this subgenre. One strategy is including documents in between the chapters – police reports, academic studies, film critics writing about the films these women have inspired – which really gives the reader a sense of how the ‘Final Girl’ operates in this world, and encourages us to explore our own detached view. Why do we enjoy seeing monstrous male killers slaughter nubile young women? Purposely, Hendrix never really dwells on any of these killers – it’s the victims and survivors that deserve the spotlight here.

There are flaws and a disappointing climax that somewhat dampens the experience, but it’s still a worthwhile one for the most part

I did enjoy this book, but there are some issues that hampered my reading experience. It’s clear that Hendrix is a huge fan of the era of classic slashers, and I loved the references to the films in the chapter titles, but there are other areas where the callbacks are a little… much. All of the Final Girls were involved in massacres that are the plots of famous slasher films, pretty much lifted directly with the most minor of details changed. It’s hard for me to picture Hendrix’s characters when their backstory belongs to another character – I’m reading Julia, but I’m picturing Sidney Prescott, for example.

There were moments that I didn’t quite buy. There’s a random murder attempt that comes almost out of the blue halfway through the book, a bizarre encounter with a ‘Failed Final Girl’ that comes across as a bit silly, and an excursion to a park that defies belief. There’s also not really enough set-up to sell the idea that someone is actually out to get the ‘Final Girls’ at all. One ‘Final Girl’ is killed by someone linked to her past, and from that we immediately get a conspiracy – I get Lynette’s paranoiac conclusions, but it doesn’t feel earned, and I spent a good chunk of the book thinking it would actually prove to be paranoia or something to that extent as the solution.

And, as it always seems to be the case with horror, it’s let down by the ending. It feels rushed in parts, and as if it belongs to a different book entirely in others. I won’t reveal the bad guy, but I found it quite underwhelming – although Lynette hypes them up prior to the last few chapters, the villain barely does anything throughout the book, and the way our hero discovers their identity is laughable. There are a few too many twists, and the heavy-handed gender politics stuff at the end feels somewhat out of nowhere and rammed into the motive (frustrating, really, after it’s done much better earlier in the book).

If you’re a horror fan, or you enjoy thriller writing, I’ll recommend The Final Girl Support Group to you. Hendrix’s writing is fast and effective, and the story is an interesting one with a compelling lead character. There are flaws and a disappointing climax that somewhat dampens the experience, but it’s still a worthwhile one for the most part. I can’t think of many modern books combining such a distinct authorial voice and interesting premise, and they certainly make up for this book’s shortcomings.

The Final Girl Support Group, published by Titan Books in the UK, was released on 13 July 2021.