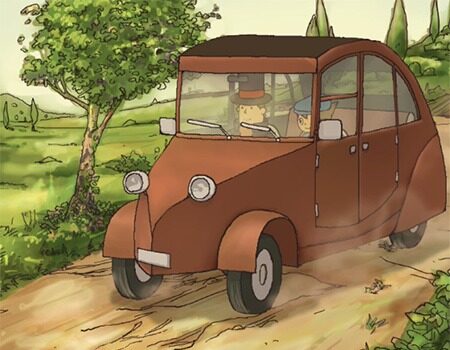 The Professor Layton series has many memorable aspects. The puzzles are the iconic catch, the art is beautiful, and the stories are captivating. But what ties everything together is the music. There are few series with such perfect, diverse, and always wonderful of a soundtrack as Layton. It encapsulates the exact mood required at every point.

The Layton series is rather anachronistic, and that’s on purpose, as while ostensibly set in the 1960s, with an unused Curious Village game file locating the originally intended date to be 1960, the developers didn’t want to be constrained by the year. All the better for it. It allows us to have the unique blend that makes Layton, the idyllic countryside, the actually nice-looking London, and the music having a distinct French feel. While technically set in England, with London as one of the only real settings, the French-style music was intentional, and the time period feels like an idealised vision of England.

There is much to the world of Professor Layton. There’s the original trilogy, prequel trilogy, anime film, Ace Attorney crossover, mobile game with Layton’s son Alfendi, sequel game with Layton’s daughter Katrielle, and anime featuring Kat, and many (annoyingly) Japan-only books and assorted media. Wherever there is music among all these franchise entries you can be sure of its quality.

Curious Village, Pandora’s Box, and Lost Future are the original trilogy. Spectre’s Call, the Eternal Diva film, Miracle Mask, and Azran Legacy are the prequel series. The mobile Mystery Room, Katrielle and the Millionaires’ Conspiracy, and the Katrielle-based anime make up the New Layton media. There is the Ace Attorney crossover for the 3DS too, which if counted as canon is usually placed between Pandora’s Box and Lost Future by fans. There are three Japan-exclusive novels and short humour manga. As an aside Layton, Flora, Luke, Chelmey, Anton, and Don Paulo all first appear in 3D in another Level-5 series, Inazuma 11, as the Layton football team.

Throughout the Layton universe the music has been stellar, whether on the DS for the first four or the 3DS from Miracle Mask onwards. Tomohito Nishiura is the mastermind in-house composer for Level-5 since around 2000 who has delivered us some absolute classics of game music over the years. Even with Professor Hershel Layton leaning into the English gentleman character archetype, the game being set in England, and London and Scotland Yard as recurring features with Layton’s university, Gressenheller, being in London, the music is distinctly French feeling. This was on purpose, and works spectacularly, even if critics of the first couple of OSTs weren’t blown away. Square Enix Music Online gave Curious Village’s a six, Pandora’s Box a seven, and Lost Future and Spectre’s Call’s eights. There was no official OST released for Miracle Mask and Azran Legacy. Game-OST.com gave the Ace Attorney crossover’s soundtrack a 9/10.

This last review mentions something key, that Layton was now “no longer hindered by hardware limitations,” which allowed composers to go all out. Tomohito Nishiura composed the Layton parts and Yasumasa Kitagawa did the Phoenix Wright parts. They arranged and orchestrated with help from Layton veterans Norihito Sumitomo and Yumiko Hashizume. These tracks shine and the live versions are performed by the Layton Grand Caravan Orchestra. A fitting highlight for both series.

We are introduced to mainstay instruments of accordion, French horn, and marimba, which reappear frequently even with the shift to a full orchestra

Even as later games could make use of better technology and the film used an orchestra for its music, the basic accordion, French horn, and marimba of the quintessential original Layton music will be an all-time beautiful classic. Witnessing the evolution of the music through the years is fun and the nostalgic quality of older entry’s music pairs amazingly with the grandiosity of later games and always fulfils the required needs. Even with the simplistic beauty of the original, Curious Village.

Let’s see where this all began: Professor Layton’s Theme in Professor Layton and the Curious Village on the DS, Level-5’s 2007/8 smash hit. This is a timeless theme, present in every game with a wonderful live version in the Azran Legacy OST and a slight reimagining in Mystery Journey. We are introduced to mainstay instruments of accordion, French horn, and marimba, which reappear frequently even with the shift to a full orchestra.

The titular curious village, St. Mystere, has an eponymous track that is the title screen music which is instantly recognisable. The first encounter with music for puzzles, called ‘Puzzles’, is a simple piece, using only a few note patterns and chords, but brings out an inquisitive feel and tension (and sometimes frustration) as you struggle through this village’s puzzle obsession. ‘The Plot Thickens!’, which plays whenever the mystery, well, thickens, builds the tension and mystery, especially whenever you return to report to Inspector Chelmey at Reinhold Manor. ‘Pursuit in the Night’ isn’t heard for long, but a personal favourite.

‘The Veil of Night’, the night-time theme encapsulates the feeling of the village after dark – peaceful, with hints of melancholy and something a tad ominous at times. Layton is also no stranger to villains, the first theme for Don Paulo, ‘The Great Don Paulo’, is an enduring classic which is perfect for Layton’s moustachioed nemesis. ‘The Looming Tower’ is a masterclass of a simple, effective, but surprisingly nuanced way to build tension, atmosphere, and mystery as you climb the tower at the centre of this curious village. As will become a staple of the series, Curious Village has a wonderful, calming, emotional, and reflective ‘End Theme’ which ties up the story accompanied by artwork with the credits, seeing you off to the ‘to be continued’ screen and a glimpse of a bottle-green train.

Now we reach Professor Layton and Pandora’s Box, the game which solidified Layton’s reputation and improved on scope, story, ideas, puzzles, and of course the music. ‘The Elysian Box Theme’ opens the game and is a track that is pure joy to listen to, it is already a step above the opener to the previous game in instrument range and atmosphere. We get our fix of accordion with ‘In London’, both mysterious and unsettling. ‘Puzzles Remixed’ is a slightly modified version of the original and accompanies you through this games’ puzzles, even the little changes add so much more to the experience (and the frustration as it loops as you get stuck on one of the late Akira Tago’s most evil creations). It is great to see the evolution of the music bit by bit. It highlights the importance of it to this series and how it wouldn’t be the same without Tomohito Nishiura’s masterful musical mind.

Through your journey on the Molentary Express you encounter a range of music, still with a distinct French flavour with ‘The Molentary Express’ and ‘The Village of Dropstone’. Then when you reach ‘Folsense’ the eponymous track is probably one of the saddest but well-crafted tracks in the series. ‘Suspense’, with its reverberating chimes is easily one of the most unsettling and for eeriness ‘The Somber Castle’ wins hands down, with ‘An Uneasy Atmosphere’ a close second. The flute in ‘The Dark Forest’ is simply beautiful and the emotions evoked with the events and music to ‘The Ball’ deserve a mention. And again, the games’ ending theme, ‘Iris’, is beyond reproach and concludes one of if not the most heart-breaking but wholesome end to a Layton game, although Lost Future, this trilogy’s finale, is a clear rival. Pandora’s Box is a beautiful game elevated by its music and was a worthy successor in every way to Curious Village and received its own worthy successor with Lost Future. 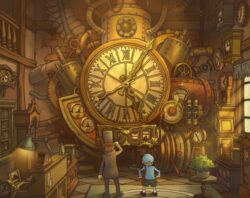