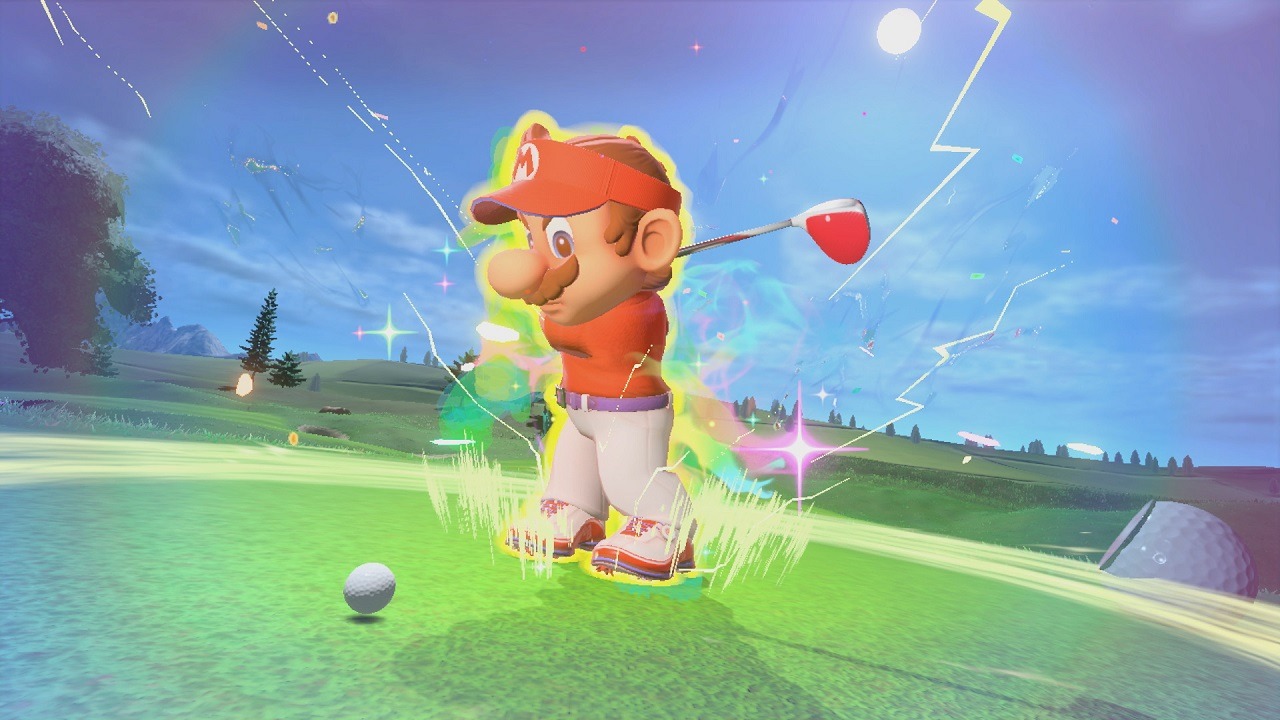 We know Mario as a platforming hero, but he has a long track record as a major sportsman. He has played tennis, football, motorsport, and he’s even a bona fide Olympian. Excluding a brief 3DS outing in 2014 though, Mario has laid off golf for a long while. Yet now, he’s back with Mario Golf: Super Rush.

Camelot’s return to the green is decent enough, and you’re likely to have fun with it (especially if you play with friends), but it feels unpolished to an extent and lacking in content.

If, like me, you find golf tediously boring, I can fortunately confirm that Super Rush actually makes it fun. Like the best Mario sports games, it’s incredibly easy to pick up – simply put, you line up your shot, press A to begin your swing, then A again (or B for some backspin) to select the power level. There are also motion control options, which do work fairly well evoking memories of Wii Sports as you use a Joy-Con as a club if that’s your preference. The golf mechanics are solid, and leave a lot of room for complexity and fine-tuning your shots as you play.

If, like me, you find golf tediously boring, I can fortunately confirm that Super Rush actually makes it fun

There are a few modes in the game – the major selling point, and the one we saw most of in the trailers, is Speed Golf. The premise is simple – every player tees off simultaneously, and then they must dash to their ball on foot. You hold B to dash for as long as your stamina holds out, and you can pick up hearts and coins to refill your stamina and special shot bars along the way. The winner is the first player to pot their ball. Theoretically, this should be a fun strategic challenge, especially as each shot adds 30 seconds to your time, and it is, but only to an extent. The risk-vs-reward mechanic is a solid one, but the novelty of the mode wears off quickly, especially as the running element is not overly enjoyable – it’s called Speed Golf, but it takes too long (To give you some idea of how much time it demands, you have to sit and wait for your competitors to finish even if you putt quickly).

There’s somewhat less to love, however, in the adventure mode. You play as your Mii, and you’re tasked with becoming a golf champion (by Birdo, for some reason – the Mario characters are really shoehorned in). This translates into what is essentially a series of tutorials, replaying courses, facing boss battles and dealing with daft conditions that make getting to the end a bit of a chore (although some, to be fair, are enjoyable but criminally under-used). The story and the dialogue are surprisingly flat – I got to the point where I was just skipping through them to get onto the next tournament – and then I had to randomly deal with some climate change before the mode was done. It lasted maybe seven hours, and it left me very underwhelmed.

There was so much potential here for something really special…but it just feels like the bare minimum and, at points, barely even that

The Battle Golf mode is probably the best one, but it faces the same issue – it’s barely there. You’re placed in a shared arena with nine holes and lots of hazards, and the first player to score three wins. The idea is that you use your special abilities to hamper your opponents, but it’s actually easier to win if you ignore them entirely. You’ve got one map, and the games maybe last three minutes if you’re lucky – it’s like a minigame, masquerading as a full mode.

There are a few positives among the underwhelming experience. The online is surprisingly solid, although I’d be lying if I said it appeared the game makes much demand on it. It also looks lovely – the character models are fun, and the courses are full of life (but there should be more – we only have six in total [editor’s note: since this review was written, new DLC has been made available]). But there’s only so much you can polish, and a game that looks nice but barely offers anything simply doesn’t justify a £50 price tag.

I don’t want you to think I disliked Mario Golf: Super Rush – on the contrary, I think it’s really fun while it holds your attention. The problem is that it simply doesn’t last long, and there’s barely anything to bring you back once you’re done. It’s a solid golf game, and probably a fun one to break out for a party with friends, but you won’t often revisit it. It’s a shame – there was so much potential here for something really special, with hints of good ideas littered throughout the game, but it just feels like the bare minimum and, at points, barely even that.