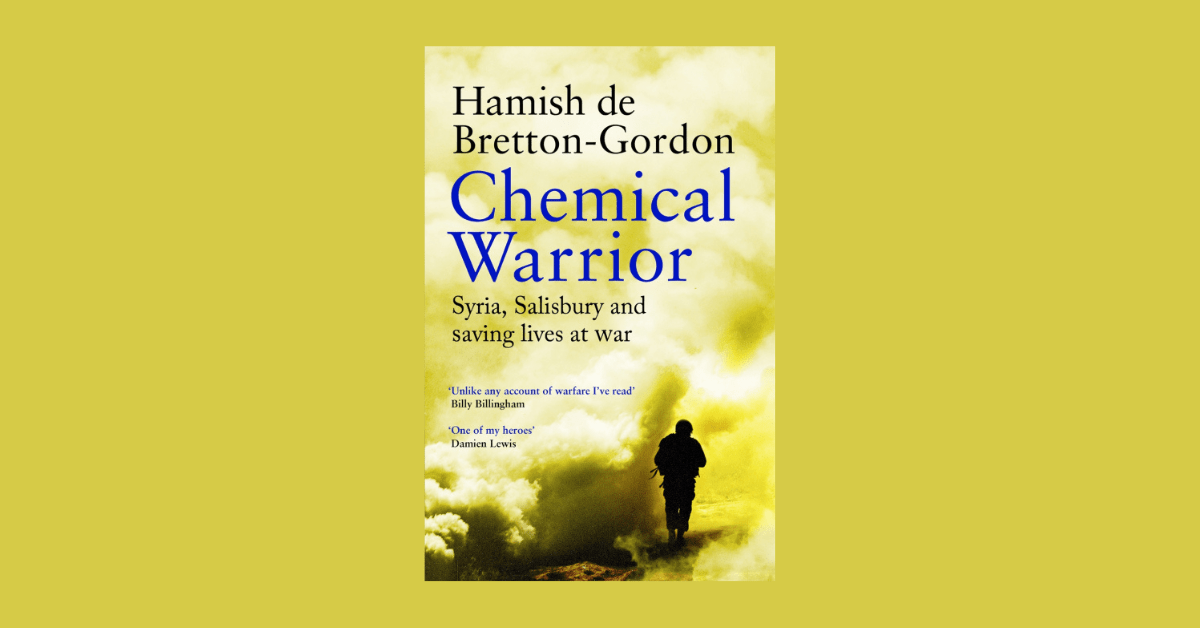 Chemical Warrior follows the journey of the army’s foremost chemical weapons expert, Hamish de Bretton-Gordon, or DBG. DBG shares his accounts of war in the Gulf, his time commanding the Chemical, Biological, Radiological, and Nuclear (CBRN) Regiment, and many of his experiences in Iraq, Syria, Afghanistan, and more. As the title somewhat gives away, this book is about chemical weapons. I bought it from a local store, because being a chemist myself, I think I have a responsibility to understand the implications of my field, both good and bad. However, reading the book, it soon became very clear that this book is an essential read for all who want to see more justice, more compassion, and more empathy in this world.

The book is both nonfiction and memoir: there are both personal insights into the life of a soldier, and a painfully thorough account of the tragedies of war. Perhaps the thing that softened me towards the book the most is the author’s faith in, and compassion for, the Syrian people. This may be DBG’s memoir, but he does not fail to shed light upon the horrors and misery in Syria due to the war, including chemical weapons attacks. As much as I love reading the news, short articles with breaking news headlines simply fail to capture the plight of everyday people in war-torn countries, or anyone else suffering, for that matter. What has really worked for me is reading books such as Chemical Warrior, watching the BBC’s Once Upon a Time in Iraq, and reading Louise Fazackerley’s The Uniform Factory. These are books, documentaries, and poems that present the raw truth and grief of those destroyed by war.

Reading the book, it soon became very clear that this book is an essential read for all who want to see more justice, more compassion and more empathy in this world

Another theme that stood out for me was mental health and finding purpose in life. Being a soldier, DBG discusses his upbringing and mindset, and how expressing feelings was not quite something that naturally came to him. It builds on his own journey learning to cope with the challenges of war, that are not just physical, but emotional and spiritual as well. Having been diagnosed with Sudden Death Syndrome, it was a journey for DBG to reconstruct a narrative in his life following his diagnosis and along the way forging his own meaning of what living life is about for him.

The book also discusses topics of world order. The role of organisations such as the United Nations (UN), Organisation for the Prohibition of Chemical Weapons (OPCW), and dynamics in international relations influence justice at a global scale. DBG works hard, with other people, gathering evidence and proving incidences of chemical attacks. His commitment to bringing truth to light is heartwarming, and the accounts he shares of everyday people, including of little children and their suffering, is heartbreaking. Sometimes I wonder how we have so many weapons today to destroy lives, cultures and heritages but there is apparently nothing the world could do to give the Syrian and all other children a safe, happy, and peaceful childhood. A chance at living life.

I think it is important that we educate ourselves about this, and strive to influence the politics of the day to ensure that our leaders are unforgiving towards those who dare use chemical weapons

I am very much a fan of nonfiction that brings to life the stories and struggles of ordinary, everyday people, while having a universal message for society. This is what Chemical Warrior is really like. The book wraps up by discussing the chemical weapons attack in Salisbury. Something that shook the nation. I think for me Salisbury truly brought the threat home and that it is not just a concern for distant lands. Chemical weapons are non-discriminatory – purging life wherever they reach. In some cases, just 50 to 100 grams of these substances can kill millions of people. They are some of the most heinous attacks that can be committed; giving people a slow painful death. I think it is important that we educate ourselves about this, and strive to influence the politics of the day to ensure that our leaders are unforgiving towards those who dare use chemical weapons.