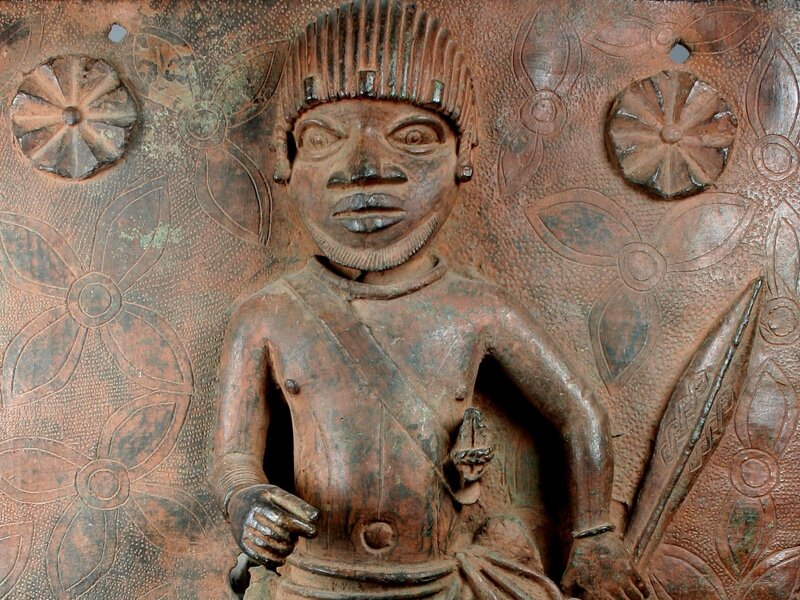 Image: Courtesy of the Metropolitan Museum of Art

New York’s Metropolitan Museum of Art is to return a pair of Benin bronzes to Nigeria. The 9 June announcement comes after several European institutions have made or stated their intention to make, similar efforts and the Met’s statement will likely compel further such repatriations. Returning the two plaques, which depict a junior court official and a warrior chief, have already reignited a conversation about stolen art, the impacts of colonialism, and what Western institutions can do to atone for the often violent and illegal ways they obtained some of their artwork.

The Benin Bronzes (or rather Benin objects because not all of them are made of metal; some are ivory or wood) are objects originating from the Kingdom of Benin, in today’s Nigeria. When the British Empire invaded the kingdom in 1897, around 90,000 objects were looted, partially to pay for the costs of the military expedition. Many were auctioned off and made their way into private collections and many major museums around the Global North. The two plaques slated for repatriation by the Met were gifted by the collector Klaus Perls and his wife Dolly in 1991.

Returning the two plaques have already reignited a conversation about stolen art, the impacts of colonialism, and what Western institutions can do to atone for the often violent and illegal ways they obtained some of their artwork

The Met director Max Hollein said in a statement: “The retention of these works within Nigeria’s national collections is critical to the well-being of the museum community and to fostering ongoing cooperation and dialogue between the Met and our Nigerian counterparts.” They will be handed to Abba Issa Tijani, director general of the Nigerian National Commission for Museums and Monuments, when he is able to travel to New York.

In a statement, Alhaji Lai Mohammed, Nigeria’s minister of information and culture, said: “We welcome the rapprochement developing in the museum world, and appreciate the sense of justice displayed by the Metropolitan Museum of Art. Nigeria enjoins other museums to take a cue from this. The art world can be a better place if every possessor of cultural artefacts considers the rights and feelings of the dispossessed.” Nigeria is looking to build an Edo Museum of West African art in Benin City, and it is hoped that this will house a world-class collection of Benin Bronzes, including ones that were taken illegally.

Although generally positive, the reaction to the Met announcement has been met with some scepticism

There have been turns towards returning art and cultural objects stolen by colonialists in recent years. In Ouagadougou in 2017, President Emmanuel Macron announced his intention to return colonial loot from French colonial museums and to commission the ground-breaking report by Senegalese academic and writer Felwine Sarr and the French art historian Bénédicte Savoy that ultimately supported his decision. In April, the German culture minister Monika Grütters announced that the country expects to begin restituting its Benin Bronzes in 2022.

Although generally positive, the reaction to the Met announcement has been met with some scepticism. Erin L. Thompson, professor of art crime at John Jay College, notes: “The Metropolitan is repatriating two artefacts stolen from Nigeria in the 20th century, but not the many other artefacts stolen from that territory in the 19th century in its collections. These artefacts – key parts of the sacred and political workings of the Kingdom of Benin – were taken during an orgy of violence intended to steal not just the kingdom’s treasures, but the kingdom itself. How can the museum boast of doing the right thing when it continues to display so proudly the fruits of such cruelty?”

If artefacts and artwork were stolen from a nation, it’s morally and legally right that they should be returned

Around the world, there are roughly 160 institutions holding Benin Bronzes – Artnet reached out to 30 of them and asked their positions on repatriating the stolen artefacts. Broadly speaking, the institutions were in favour, but few had actually returned any artefacts or were willing to confirm if any restitution requests had occurred. Dialogue and support are important, don’t get me wrong, but action and restitution are far more so. If artefacts and artwork were stolen from a nation, it’s morally and legally right that they should be returned.

Barnaby Phillips, author of Loot: Britain and the Benin Bronzes, writes that the move by the Met is simply “about PR and legality, not morality”, and I hope that doesn’t turn out to be the case. So many of these institutions thrive on artwork and cultural artefacts taken from other nations around the world – as conversations about the impact of colonialism become more commonplace, it’s right that museums listen and think about their own role. Museums can’t change how they obtained artefacts, but they can think about who should rightfully own them and take action.