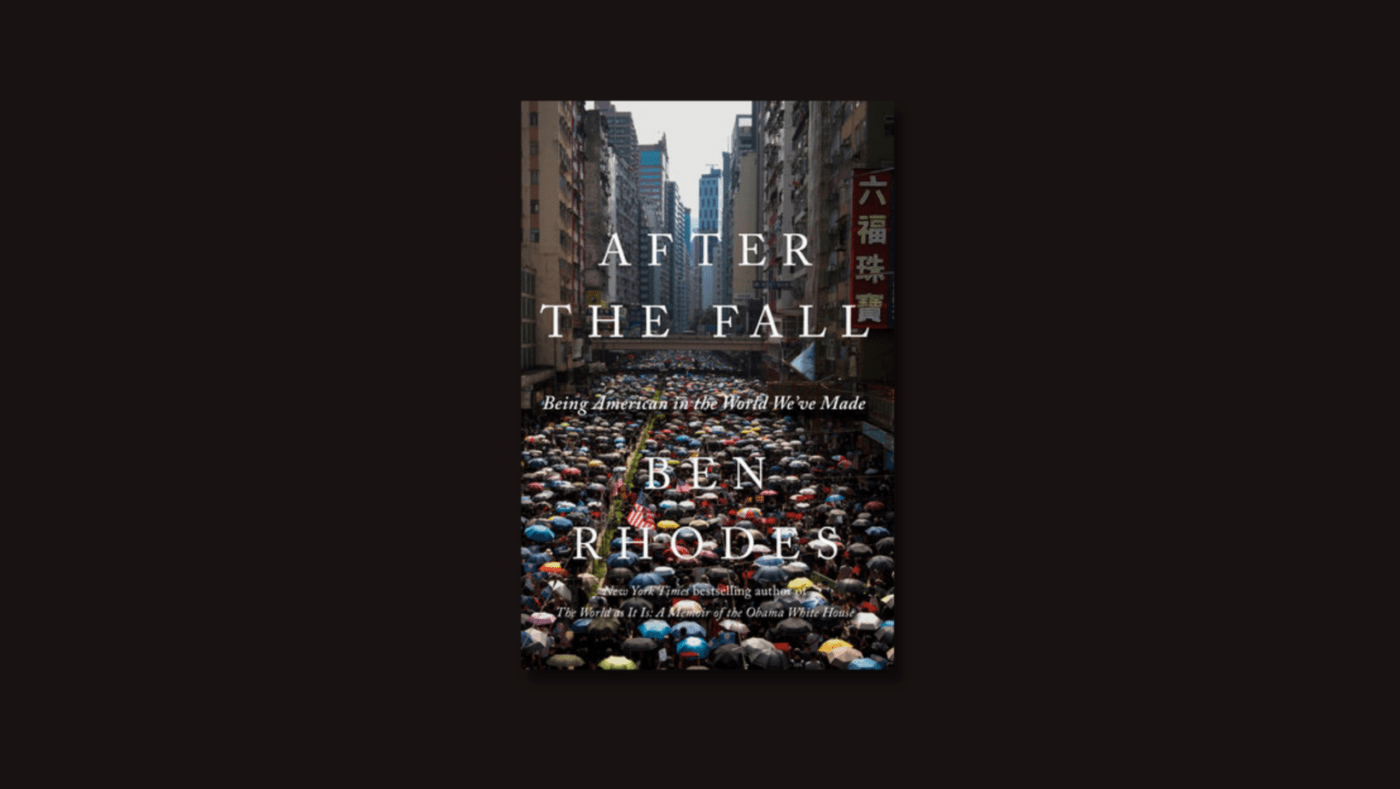 ‘After the Fall’ by Ben Rhodes review: a wonderful personal reckoning with our autocratic world

Since the fall of the Berlin wall in 1989, the US has fallen from its position as the world’s only truly global power. Why and how this has happened, is essentially what After the Fall  by Ben Rhodes is about. He comes to the conclusion that our changed world order was the United State’s doing. Its excesses at home and abroad, both relating to economics and foreign policy, created a fightback against the liberal democracy that he, and presumably all his readers, believe in so much. The fall, he suggests, was essentially self-made.

Rhodes is likely the perfect person to write a reckoning about our increasingly technocratic and undemocratic world. For eight years, he served in the national security apparatus of the White House under President Obama. Personal highlights included helping negotiate the Iran Nuclear Deal and the re-opening of Cuba and US relations, both of which feature in this book, just as they did in his memoir The World As It Is. He was a senior speechwriter in the Obama 2008 and 2012 campaigns, and in the White House. If any reader needed any more proof that this was going to be the exceptionally well written book that it is, he also has a degree in Creative Writing.

His conversations with Navalny are deeply fascinating, as they picture for you what being the front man in the fight against one of the most brutal governments in the world must feel like: the anger, the terror, and pain

While this is a personal account of the transformation in our global politics, After the Fall is not filled with endless description. Rhodes wonderfully tells the story of our political decline through the stories of individual people, including his own. For example, he tells the time the for-hire secretive Intelligence agency Black Cube attempted to dig up dirt on Rhodes to smear the Iran Deal. Or, the many private post-presidency conversations he had with President Obama, revealing more of his thoughts on the 2020 Democratic primary, foreign dictators, and why democracy has dipped.

To illustrate the extent of the fall, Rhodes sets out his book into four neat sections, explaining the political landscape of three of the most important autocratic states in the world: Hungary, Russia, China, and then the most important liberal state of all, the US.

Any look at Hungary in the last few decades cannot avoid the current Prime Minister, Victor Orbán. Rhodes chronicles his story and shows how it mirrors modern history. Once a freedom fighter, protesting for the right to a fair vote and free speech during the Soviet era, he is now a totally corrupt politician, no longer aligned with the American doctrine of politics, but with Putinism.

The inspiration for this book is Rhodes’ post-government travels. He went all over the world to meet activists and young people to find out why the world had turned in such a dark direction. One of these people stood out for me in his Russia section – Alexei Navalny.  He knew Alexei Navalny long before he dominated the world’s news. His conversations with Navalny are deeply fascinating, as they picture for you what being the front man in the fight against one of the most brutal governments in the world must feel like: the anger, terror, and pain.

One of my favourite chapters in the entire book concerns his visit to Hong Kong. A city of prosperity and freedom at the time of US hegemony in the 90s, it, like Orbán, is a symbol of the change in our times. He shares the stories of the dozens of prominent activists he meets there, sitting on the very edge of democracy, rights and being free, who take unreal risks to protest and highlight the strain of their struggle. These tales should be a call to the entire world about the threat posed by creeping authoritarianism.

Its excesses at home and abroad, both relating to economics and foreign policy, created a fightback against the liberal democracy that he, and presumably all his readers, believe in so much

Nearer the end of the book. Rhodes tries to tackle exactly why our populist fall has occurred, and he traces it back to his home. His argument is simple, powerful and ought to be read. After the fall of the Soviet Union, the US had no enemy to pour its resources at. It became unchecked and unsure of its national direction. Its economy boomed and its finance industry took risk after risk until financial crash. Its foreign policy became destructive, as it started endless wars it could not win, and fought in a way that was contrary to the values it fought for. Technologically, it innovated without an afterthought creating social media tools that are a godsend for dictators. The result he argues, is an America with a deeply diminished reputation and far less authority.

While this book is exquisitely written, and details sublimely why the fall has occurred, the reason everyone ought to buy and read this book is the many dozens of people that feature in it. The courage they show protesting when their odds are long, and the governing opposition has such power and immorality, is inspiring. The fact they act, and keep fighting, while people like Rhodes keep on telling their stories, should give us all hope.