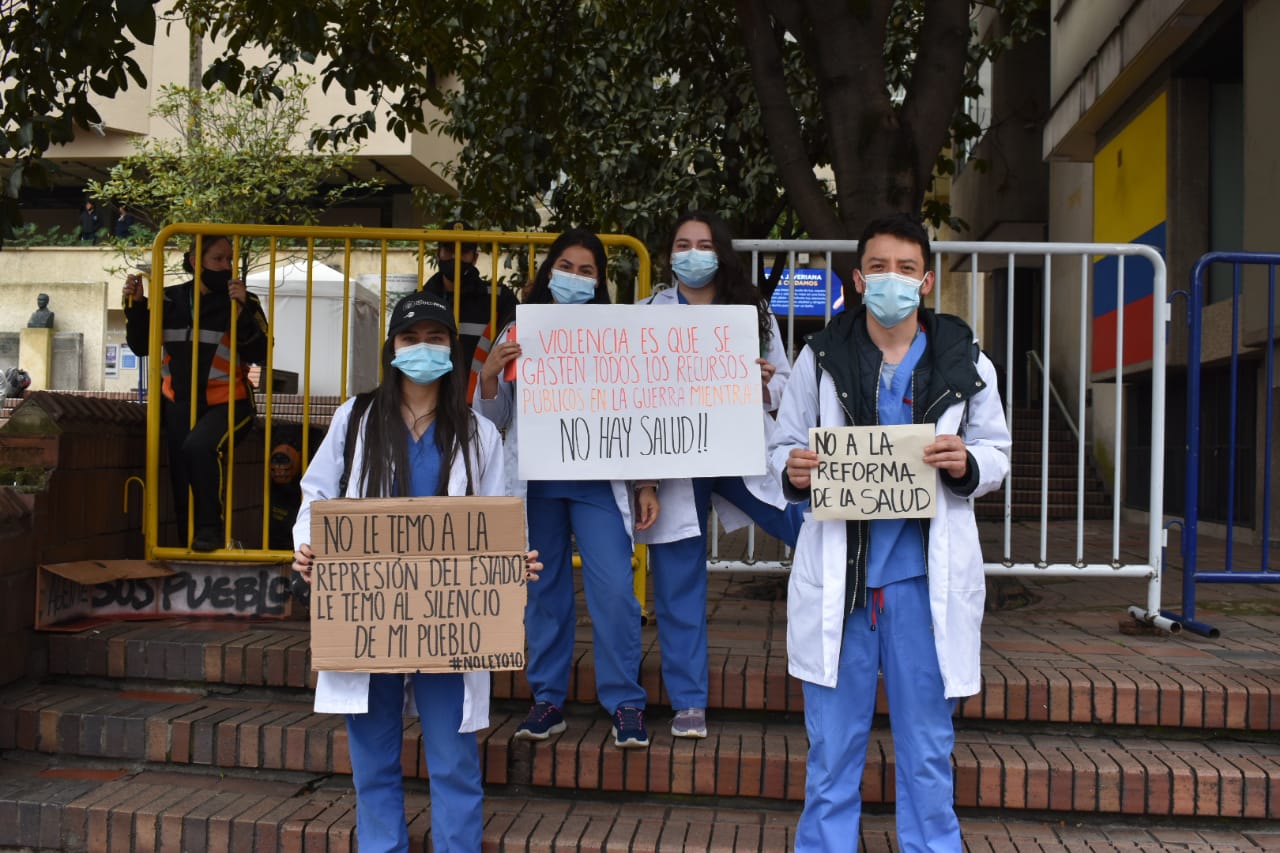 Thousands of students and young people have been leading the charge in the protests against Colombia’s government during recent months. The protests are not only made up of students but also workers, union members, and pensioners alike – protesting against the Colombian government and President Ivan Duque.

Colombia is considered to be one of the wealthier countries in the region of Latin America, also holding the title of having the highest university-educated population. Despite this, there has been continued civil conflict within the nation for over half a century.

The country has struggled with huge inequalities and violence induced by paramilitary groups and dominant drug trafficking bodies, who are responsible for causing hundreds of thousands of individuals to be displaced from their homes. They are additionally responsible for the murders of multiple activists in the socialist and unionist communities.

The demonstrations were initially ignited by public outrage regarding tax reforms in late April, which have now been cancelled. Thousands flooded onto the streets under the instructions of unions on 28 April when President Iván Duque’s government attempted to elevate tax rates on fuel, wages, pensions and public services. These introductions would have been an exponential burden on the middle class.

Even though the government later scrapped the proposal four days after 28 April, it was too late. Protests continued, with many young people feeling discontented with the mismanagement of the coronavirus pandemic by the government – their aspirations for a better future ruined.

The demands of the protestors have now expanded beyond that of outrage towards now-cancelled tax plans. They have extended to include demands to end police brutality, a total withdrawal of current health reforms, and a call for economic support as Covid-19 continues to negatively impact the income of most Colombians.

Many have expressed huge concerns regarding the healthcare reforms, stating that they are not adequate in ensuring wider access to healthcare. Nurse Paula Garcia has stated that she felt confident that the government could be pressured into withdrawing the health reform altogether, similar to the tax reform.

There have been smaller demonstrations and blockades occurring throughout the country

Director for the Andes at the Washington Office on Latin America, Gimena Sanchez, stated that these protests are more than just personified anger at the inequalities exacerbated by Covid-19. While unemployment has risen to nearly 17% in urban areas of Colombia due to the pandemic, Sanchez stated the protests also exemplify the anger felt toward Duque regarding the police repression which has occurred from 2019 onwards.

She continued that frustrations felt by the Colombian public stemmed from the lack of advancement of the 2016 peace accord, as well as “rising massacres and killings of social leaders.” This has led to the Colombian middle and working-classes viewing the government as only aspiring to advance “the economic and political elites’ agendas.”

There were large demonstrations on 12 May in the country’s capital, Bogotá, and the city of Cali. However, there have been smaller demonstrations and blockades occurring throughout the country. These road blockades have caused huge implications regarding the imports of goods to the country, blocking tens of thousands of barrels of fuel and half a million 60 kilo bags of top crop coffee from the neighbouring nation of Ecuador. There have also been elements of violence occurring during some of the demonstrations.

Equally, Colombians were not only ignited by the huge mismanagements in the dealings of the pandemic but also frustrations regarding reports of police brutality, disappearances and deaths of protesters.

As of 12 May, three police officers were facing murder charges

With certain demonstrations taking a violent turn, there has also been a rise in deaths and disappearances occurring at protests. As of 15 May, the government has only confirmed 14 deaths that have direct relations to the protests. However, Human Rights Watch has alleged that they have received “credible reports” of 48 deaths. The majority of these deaths are said to be individuals aged between the ages of 13 to 34. Both international and local human rights groups allege that this death toll could be higher than stated by official institutions, laying blame on the police force. As of 12 May, three police officers were facing murder charges.

Where the hub of protest violence resides, in the city of Western Cali, 100 young individuals decided to create a blockade on a central highway as retaliation to police brutality and government censorship. A 19-year-old student named John, who refused to give his surname stated, that: “The government is censuring us, killing us, forcing a health reform, a pension reform.” He continued that protesters “will resist until there’s a change.”

A similar sentiment was echoed by a 36-year-old law student – Yonny Rojas – who commented that there was no longer a fear of death as it is “the only thing that remains” in a system that is depriving them, leaving no opportunities for their futures.

In response to the protests and police brutality, President Duque stated that it would be unfair to portray everyone who has been protesting peacefully on the streets as a criminal, vandal or terrorist. He also shared a similar sentiment regarding security forces, stating that it would be “unjust to generalize [their] behaviour.” Duque’s statements followed discourse where they had denounced occurrences of looting and attacks on police.

Additionally, the government have also retaliated to claims of corruption, censorship and police brutality with accusations against protestors. These include allegations of protestors vandalizing properties, looting, and setting up roadblocks that have resulted in shortages of food and vaccine deliveries – as well as the blocking of essential medical services such as ambulances. There have also been further allegations made by officials, claiming that protesters had attempted to burn alive 10 police officers in Colombia’s capital city Bogotá.

Specifically, the Ministry of Defence has claimed that they have made arrests of an estimated 700 individuals, whilst seizing 520 firearms and 14,000 sharp weapons. The government further retaliated against the protests when pro-Duque senator, Paloma Valencia, compared roadblocks to “kidnapping of Colombian society with a social protest.”

Regarding student-led protests, President Duque attempted to subdue the young protesters in both Bogota and Cali by making promises of subsidies for low-income students at public universities. However, student leaders passed on the offer, as it would not apply to all students. They said the promise was also a pledge from the party originally ‘guaranteed’ in 2019 – however, both President Duque and his government had previously failed to deliver.

Protests in Colombia have proved to be very successful pressuring governments into amending, withdrawing reforms and bringing results for the Colombian people. Students have continued to be very active in protests throughout the country’s history – especially in 2011, 2018 and the demonstrations currently occurring. Concerning the current protests, the President of the Central Union of Workers (CUT) demands clear boundaries and rules before entering discussions with the government.

The protests signify a frustration more deeply embedded within the institutional bodies of the country itself. As issues have transcended into a huge amount of corruption and lack of opportunities, this has created a bleak future for the young people of Colombia.