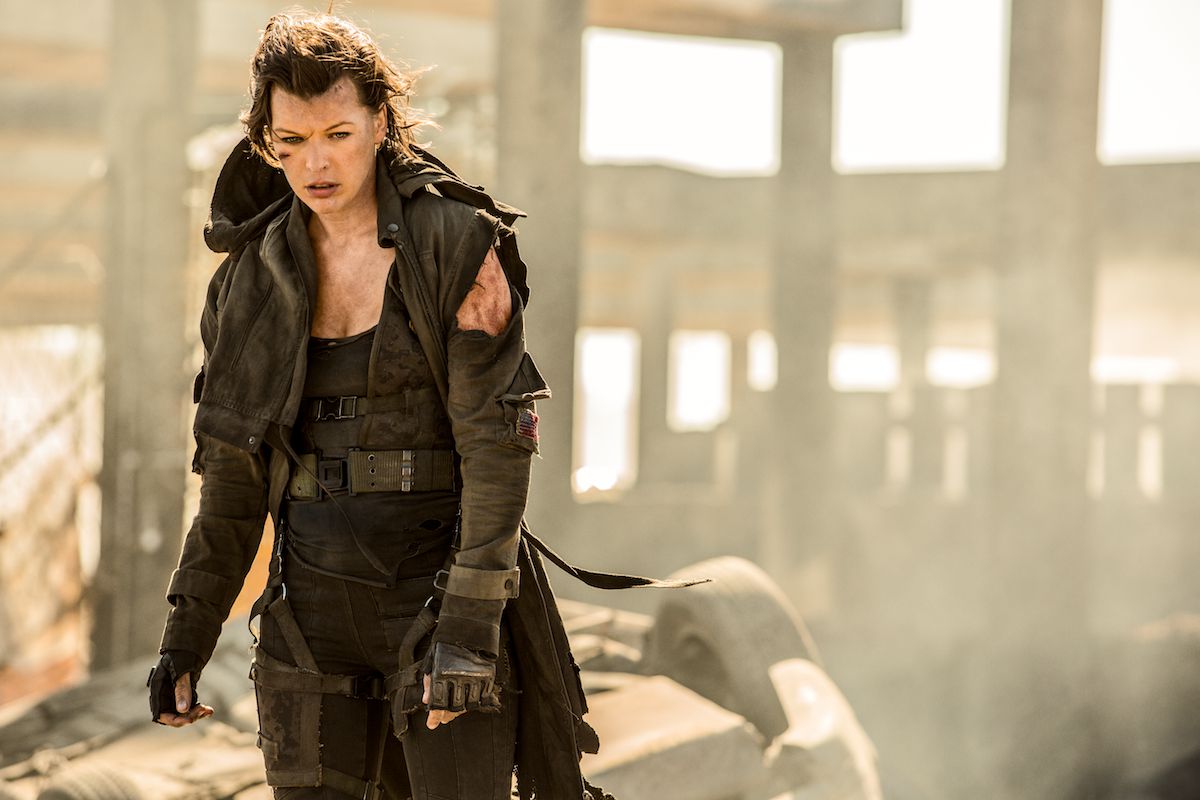 Paul W.S. Anderson is back to save the blockbuster. Returning to the realm of the video game adaptation, his third journey into such territory following Mortal Kombat (1995) and Resident Evil (2002 – 2017), Monster Hunter finds Anderson relishing in all sorts of B-movie thrills, unapologetically occupying convention as he evolves his stylistic formalism. Frequent collaborator, and wife, Milla Jovovich stars as Artemis, a Captain who, along with her team of soldiers, are transported to a new world, whereupon they must survive against the elements and the enormous monsters that inhabit it.

Paul W.S. Anderson (a notable Warwick alumni) has never gotten the respect he has deserved. Operating entirely in genre cinema, the obstacles to critical respect have always been against his favour, not least due to his favouring towards video game adaptations, a subgenre that draws backlash from two sides: those who disregard it due to its lowbrow origins, and video game fans who whine when a text defies fidelity. It is of my opinion that to demand such staunch faithfulness, for an adaptation to perfectly recreate the feelings and experiences of its source, is a fallacy; that to do so is to misunderstand what makes such mediums special and important in their own right.

Paul W.S. Anderson (a notable Warwick alumni) has never gotten the respect he has deserved

However, Monster Hunter appears as a perfect template for Anderson’s genre obsessions, throwing Jovovich into a desert (a literal sandbox) to fend for herself – woman vs nature. It is here where Anderson’s natural skill for spatial geography comes through, perfectly evoking the sense of scale for each scene. Situating Jovovich clearly and precisely within a space, it’s almost like he works backwards, grounding her in a location, then revealing the elemental obstacles to allow clear orientation. A shot of characters looking off screen in struck horror, then cutting to a bird’s eye view, followed by a snap zoom out, perfectly exemplifying the scale of the action at play. Yet this is not limited to the expansive scope of the monster battles, but to close quarters too: a scene towards the beginning appears like a direct homage to James Cameron’s Aliens (1986), with Anderson generating a truly claustrophobic piece of terror.

Anderson’s attuned sense of space is only heightened by editor Doobie White, a match made in cinematic heaven. Their second collaboration, after the much misaligned and misunderstood Resident Evil: The Final Chapter (2017), White has allowed Anderson to evolve his style and action direction even further. He favours a quicker pace of cutting, yet this is a far cry from the over cut, under directed action to be found in your standard second unit covered blockbuster. Instead, the edit builds a pulsing momentum, enhancing Anderson’s direction and spatial awareness. Rather than hiding the physicality of performers Jovovich and Tony Jaa, it enunciates them, each shot set up as if informed by the preceding one, action seamlessly flowing through the frames.

It’s pure sensationalism, with White’s frantic style emphasising specific actions: Jaa retrieving an arrow and placing it in his bow is done so in rapid succession, yet the launching of said arrow is allowed to linger, his skill and successful shot held for maximum spectacle. It’s genuinely exciting filmmaking, harking back to the evolution of film form set up by Eisenstein.

It’s genuinely exciting filmmaking, harking back to the evolution of film form set up by Eisenstein

While not as conceptually revolutionary as the later Resident Evil films, notably his masterpiece Resident Evil: Retribution (2012), such filmmaking is an exceptional display of how film form can be used to build upon genre convention and stock archetypes, the film’s form almost personifying and foregrounding the elemental factors which Artemis must survive. The significance of the elements in a desert suggest that Mad Max: Fury Road (2015) comparisons will abound, and while it may be wrong to suggest that Monster Hunter reaches such heights, it isn’t a stretch to identify it as the less disciplined, vulgar younger cousin of George Miller’s masterpiece.

It is perhaps this striking focus on Jovovich vs the elements and the disregard for narrative that appears as a deterrent for some. Monster Hunter is as minimal as its title: it’s a celebration of the genre B-picture, an unembarrassed creature feature that wants you to know just as well. Its launching of Jovovich, and the audience, into this new world occurs without exposition, and anyone who desires to receive any will have to sit through pure spectacle for an hour – such as Tony Jaa decapitating a spider-like creature with a giant, f*ck off sword in slow motion. One of the great contemporary martial artists (anyone familiar with Ong-Bak (2003) will understand the ‘before and after’ of Jaa’s career and the martial arts genre as a whole), Jaa’s stature is perfectly exploited by Anderson, and his physical performance aligns perfectly alongside Jovovich.

In the recent past (probably last week) I’ve, with much vitriol, scorned the death of the movie star, the once celebrated species that seemingly disappeared overnight once everyone decided they preferred capes and spandex over charm and chiselled looks. I must apologise, as Milla Jovovich, the last action heroine, is keeping the movie star dream alive. She’s a key part of Anderson as an auteur – the two belonging on the Mt. Rushmore of actor/director combos alongside Kurt Russell/John Carpenter and Gena Rowlands/John Cassavetes – and an actor of great presence whose blank expression offers a vast canvas for performance: her eyes describe everything from determination (has anyone ever shot a rocket launcher like she does here?) to terror to joy. A central thread throughout Monster Hunter depicts Jovovich and Jaa’s journey together, a buddy dynamic primarily set up through their lack of clear communication – she cannot speak his language, and he cannot speak hers. It’s another element for the two to overcome, another purely visual piece of storytelling that comes across as incredibly endearing, the two teaching each other survival tactics through stunning seams of action and montage: him training her in weaponry cutting effortlessly to the hunting of Diablos is a particular highlight.

The detractors be damned. Paul W.S. Anderson, then, has returned the only way he knows how. He may work in a mode of genre, but he excels at it. It was the great V.F. Perkins who said, discussing Nicholas Ray, that “the distinction between personal and commercial cinemas has become a weapon for use against films which do not impress by the obvious seriousness of their stories and dialogue”. It may be nonsense, but Anderson’s stylistic tendencies are anything but. The personal is on full display here, a blockbuster proud of being such, one clearly made with sincere heart and joy without feeling the need to pretend otherwise, absent of the sluggish mediocracy that befalls the films from the biggest franchises that dominate the box office. Monster Hunter offers a glimpse into the possibilities of auteur driven blockbusters, even if they are so vulgar. The unimpressed may not be swayed, yet those who have seen the light will be right at home. We’ll be fine, Howard Hawks wasn’t respected in his day either…