Batley and Spen spares Starmer some time, he must use it wisely

Politics, as ever, is a game of expectation management. After weeks of pessimistic briefings, threats to his leadership, and all-round dissatisfaction with his leadership, Starmer has emerged from the Batley and Spen by-election bolstered and with some headroom.

Let’s not pretend that the result in Batley and Spen was an unmitigated success. Without winning seats like this, particularly in by-elections, the Labour Party has no hope of returning to power for the foreseeable future. The party is still not mounting a successful fight-back. Likewise, many in the Labour Party seem to view 2019 as the electoral ‘low water mark’. After all, this was the worst election defeat faced by the Labour Party in almost 50 years.

But it’s now clear that Labour saw a lucky escape in many seats. Other hard Brexit parties (for example, the Brexit Party in Hartlepool and the ‘Heavy Woolen District Independents’ in Batley and Spen) split the Tory vote and helped Labour cling on. If these voters unify behind the Conservatives, Labour could face even more losses. To be clear, Labour’s position isn’t actually worsening, it’s instead a wounded patient who, while no longer taking injuries, is still bleeding out.

Nevertheless, Batley and Spen is something of a special case. The situation with self-proclaimed ‘socialist’ George Galloway, who caused serious tensions in the campaign and helped to foster a general air of nastiness, is not something that is likely to be replicated elsewhere. I was involved, myself, in the physical altercation in which Labour supporters were egged and kicked; not something likely from any major party. Galloway’s supporters were deliberately menacing to Labour voters and supporters alike on the ground creating an unusual, though not unprecedented, environment in British politics. Since Galloway took over 20% of the vote and likely drew heavily from Labour support, the knife-edge result is perhaps not entirely reflective of Labour’s position in other similar seats.

Batley and Spen is also not a typical ‘Red Wall’ seat. Firstly, it has only been Labour since the 1997 landslide. It’s also much more ethnically and culturally diverse than many of the Northern towns lost for the first time in 2019. The constituency is unusual, as well, in being a collection of small towns, rather than having any one real centre. Batley is the largest settlement, but other towns have their own highstreets and characters. Likewise, while it may feel somewhat remote, Batley is less than a 20-minute drive from Leeds and has reasonable rail connections. The roads are in disrepair and much of the local area feels neglected, but few of the towns in the constituency bear much in common with the so-called ‘left behind’ towns of the North.

Starmer does need a philosophy and a strategy

Of course, this is in some ways more worrying for the Labour Party. Where much of the losses in the last election was driven by older white working-class voters, many of whom owned their own home and supported Brexit, the shift in Batley appears to have been driven by younger Muslim voters defecting to Galloway. If Labour’s support among ethnic minorities or young people elsewhere were to crater, countless ‘safe’ Labour seats could topple.

Starmer’s position appears secure for now. As a result, he has a brief opportunity to create an immediate change in Labour’s fortunes. The pandemic is not an excuse for Starmer; if a Leader of the Opposition has something inspiring to say, the country will listen. Detailed policy announcements in a time of such uncertainty are not the right approach. However, Starmer does need a philosophy and a strategy. He needs to be able to explain the broad strokes that will govern his thinking when writing a future manifesto, he needs to be able to explain how that will unite enough of the country to win a General Election, and crucially, he needs to be able to communicate these to the nation.

In the moment of respite this narrow hold buys them, Starmer’s team need to act quickly. Some hard decisions, both on politics and policy, need to be made so that the Labour Party can move forward, rather than backwards. The truth is that this government is incompetent, their economic strategy is flimsy, and their electoral coalition is incredibly shaky. However, Labour is not, as of yet, properly challenging them. It is time we got a sense for what Starmer wants to do with his leadership, what he stands for, and how it’s going to win the next election. 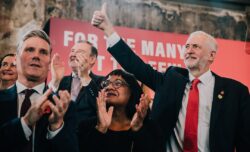