Photo by Nick Fewings on Unsplash

How do we identify a nation? We may think of monuments, languages, political leaders – and, of course, flags. Flags are shorthand for a particular nation.

In his book Flags Through the Ages and Across the World, Whitney Smith relates flags to “the primordial rag dipped in the blood of a conquered enemy and lifted high on a stick”. Thousands of years before the creation of modern national flags, armies from ancient Egypt, Persia and Babylonia carried battle standards, known collectively as vexilloids (from which we derive the word ‘vexillology’, the study of flags). These symbols were totemic, connecting spiritual power to earthly power, but they were also practical, providing mobile rallying points for soldiers. This is why Romans carried lances with metal eagles mounted on top, which also influenced many modern flagpoles.

Flags were also important tools in heraldry – during the Middle Ages, knights needed a way to display their identity on the battleground, benefitting from a new invention that came from ancient China – the cloth flag. European ships displayed heraldic banners and crosses, and as the international use of ships increased, vessels began to use flags to depict their country or city of origin, as well as their military or commercial statuses. Victories at sea were symbolised by seizing a rival’s flag and subsequent flying one of your own. This is why surrender is denoted by flying the white flag – the surrender is not only of a particular people, but also of the right to fly its standard.

Let’s talk national flags. The oldest national flag is widely recognised as Denmark’s, which dates back to at least 1219 (although it was formally adopted in 1625). Similarly old flags include Austria’s (first officially documented in 1230) and Latvia (first used in 1279). The modern Albanian flag, depicting a double-headed eagle, was first used in 1443, but the imagery dates back much earlier – it came from a banner of the Byzantine Empire, and the symbol was used by Gjergj Kastriot Skanderberh when he led a revolt against the Ottoman Empire, leading to Albanian independence. It was re-used by Albanian nationalists until its official adoption in 1912.

Flags came to mean something else. As Alferd Znamierowski, a prominent Polish vexillologist and heraldist, wrote in The World Encyclopaedia of Flags: “[After abolishing monarchies and rejected the heraldic system], the colours and designs acquired symbolic meanings and flags began to carry ideological and political messages.” In the 17th century, the Dutch Republic was the leading naval power. Their flag was easy to recognise and became a symbol of their power and wealth. In 1705, Tsar Peter the Great of Russia ordered a direct copy of the flag, changing only the orientation of the stripes, to convey that same message about his country. Religious symbols also feature heavily – the cross represents Christian countries (such as England, Georgia or Norway), whereas the star and moon crescent represent Islamic nations (such as Azerbaijan, Turkey or Tunisia).

Although we may not still salute our flags or force a conquered enemy to fly them, they’re still laden with meanings of our nations

The most uncommon colour that can be found on a flag is purple, which is only used on two flags – Nicaragua and
Dominica. Purple dye was historically really expensive to get hold of, but both of these flags were designed in the late 1900s. You can’t find purple on the flag of Belize, despite it boasting the most colours (a total of 12). Certain nations may have colours in common – Pan-Slavic countries (such as Croatia, Russia, Serbia and Slovakia) all use red, white and blue, whereas Pan-African countries (including Benin, Cameroon, Mozambique and Senegal) all use only red, yellow and green.

Of course, one thing about flags is that they need to represent you against the rest of the world. Liechtenstein and Haiti developed identical flags independently of each other, and no one knew until they competed against each other at the 1936 Olympics – the next year, Liechtenstein added a crown to the flag. The flags of Australia and New Zealand are so similar, the Australian PM was greeted with the New Zealand flag on a state visit to Canada in 1984. Flags can be a symbol of status – during truce talks between North and South Korea, both parties kept trying to bring bigger national flags than the other. It went on until they had to call a special meeting about it – the flags were so big, they could no longer fit in the room.

There are many fascinating stories about national flags, and I don’t nearly have the space to run through them all in this article, but that speaks to their history and people’s relationship to them. They’ve been national symbols for around 800 years, and although we may not still salute our flags or force a conquered enemy to fly them, they’re still laden with meanings of our nations.

The happiest countries in the world 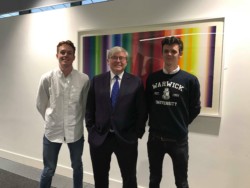