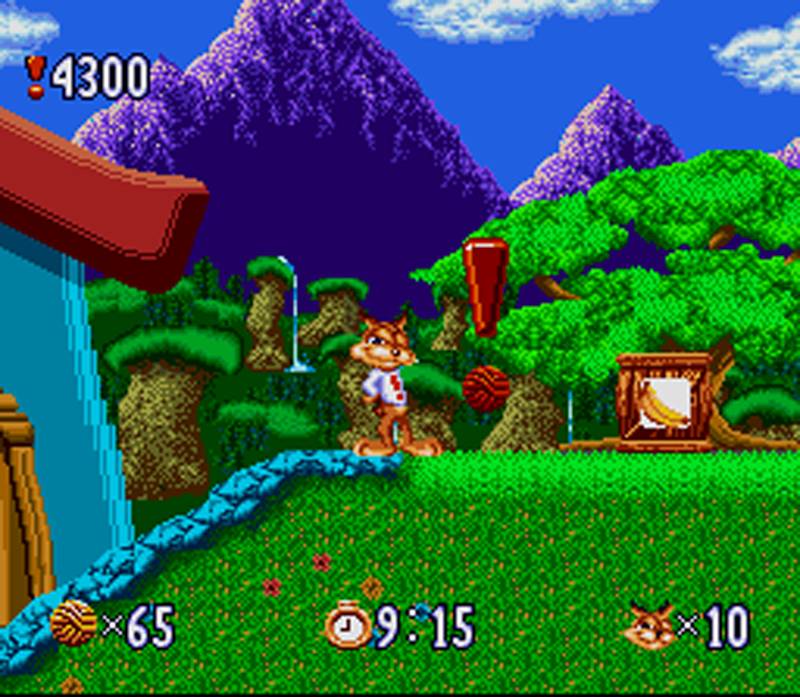 If you think of the console wars of the early 90s and the mascots who emerged, you can probably think of some key winners. Nintendo and Mario, Sega and Sonic the Hedgehog, Naughty Dog and Crash Bandicoot – gaming legends that thrived through a mixture of fantastic gameplay and a solid mascot. But not every company was as lucky, with a slew of failed mascots. Who remembers Alex Kidd, James Pond or Aero the Acro-Bat, for example? One mascot that is remembered, but for all the wrong reasons, is Bubsy the Bobcat, star of one of the worst games ever made. So what went wrong?

Bubsy owes a lot to Sonic the Hedgehog – indeed, the first game’s designer Michael Berlyn ended up playing Sonic for 14 hours a day for a whole week in order to make his own spin on it. He later said, however, that not enough of this experience made it into the game: he said he was “overwhelmed by the design and the way [Sonic] took advantage of the Genesis’ strengths”, and that Sonic inspired Bubsy’s glide mechanic. The first game’s director John Skeel said that they wanted to create a game as fast as Sonic and as deep as Mario and that it was intended to be easy to play but hard to master.

And, to an extent, they succeeded. Bubsy in: Claws Encounters of the Furred Kind, or just Bubsy, was released by Accolade for the SNES and the Sega Genesis in 1993. It’s a platformer that sees Bubsy attempt to defend his collection of yarn balls from aliens called the ‘Woolies’. The character went through several changes, including wearing shoes and carrying a hoverboard, but developers eventually settled on a wise-cracking bobcat wearing an exclamation mark T-shirt who could glide in mid-air.

Despite finding some flaws in the game’s physics and the overall level design, Bubsy was largely a hit

The marketing push was huge, with publicity framing the game as the next Mario or Sonic. It wasn’t quite that, but it was well-received by critics and audiences. Despite finding some flaws in the game’s physics and the overall level design, Bubsy was largely a hit. There was even a pilot episode made for a Bubsy TV show in 1993, not linked to Michael Berlyn, but nothing came of it.

A second game came in 1994, but the reception was markedly less positive (although still kind). Berlyn left Accolade, so the project was “given to someone who hated the character” – there was a need to keep the franchise going after the massive marketing push for game one. Bubsy II played similarly to its predecessor, and also featured a multiplayer mode, but Berlyn felt it was a step in the wrong direction: “Bubsy II was a good attempt made by people who were unfortunately not really designers… At that time in the game design business, the game designers had to be capable of doing character design, level design, populating the levels, coordinating all of the efforts, and managing the art in the team. And working in conjunction with the producer, who did basically a lot of the same things in collaboration with the designer. It’s very much changed now, but at that time in the business, designers had more responsibility and had more control over the product… And at the time, the [Bubsy 2] designer was a designer wannabe, let’s put it that way. That’s why it kind of fell short.”

That same year, a Bubsy game came out on the Atari Jaguar, but it was Bubsy’s next adventure that really made an impact – in all the wrong ways. At the time, 3D platformers were really in their infancy, and Berlyn returned to Accolade, tasked with bringing Bubsy into the third dimension. Berlyn faced some exceptional challenges: “I had no tools for drawing environments, no controller precedents that I could rely on, no way to relate polygon count to the kind of design I was visualizing, and throughout all of this, there had been no 3D platform games before. Remember: platform games were side scrolling, and side scrolling had no meaning in 3D.”

The general vibe was captured by TechRaptor, who begged: “Stop making Bubsy games!”

Bubsy 3D was released on PlayStation in 1996, and the reception was not good. It was criticised for – among other things – the camera, Bubsy’s personality and his irritating voice, the game’s environments and the poor controls. I could throw negative reviews at you, but I’m not going to pile on – Google them if you’re curious. What is an interesting takeaway, however, is that Berlyn knew it was not up to the task. At a trade show, he saw an exhibition of Super Mario 64 and realised that Bubsy 3D simply didn’t measure up. But the developers didn’t have time to amend the game: “It was too late in the development cycle, and Accolade was (rightly) pushing for a finished product.” Bubsy 3D shipped as it was and, despite being one of the pioneers that established the template for 3D platformers, it killed the franchise for more than 20 years.

Come 2017, the bobcat made a surprise comeback, with The Woolies Strike Back releasing on PC and the PS4. It returned to the style of the first game but with 3D character models, and it was intended to capture the passion (both positive and negative) of the Bubsy fan base. Despite attempts at self-deprecating marketing, people generally weren’t keen on seeing Bubsy again, and the reception was negative – Brian Shea of Game Informer said the game was “an unnecessary resuscitation”. A sixth game, Paws on Fire, was released in 2019, and its average review scores were a step up. The general vibe was captured by TechRaptor, who begged: “Stop making Bubsy games!”

It’s amazing that Bubsy is still going, given that his career consists of a single high and a series of lows. It is, I think, a testament to the lasting power of the 90s mascots – Michael Berlyn’s creation lives on in infamy, but it still lives on.