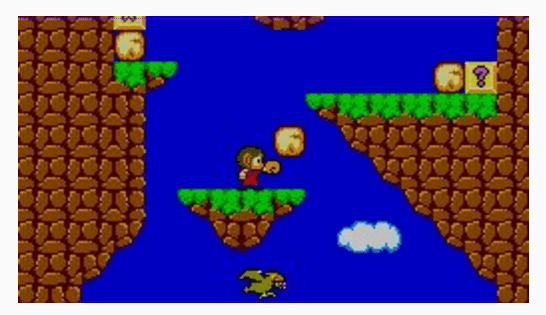 When you think of video game companies and their classic mascots, some pairs leap immediately to mind. Nintendo and Mario, or Sega and Sonic. But Sonic wasn’t Sega’s first mascot – in 1986, five years before the hedgehog, the company was after a face to rival Mario. They settled on a spaceship called Opa-Opa, but the name that really took off (and became the company’s unofficial mascot) was Alex Kidd. Kidd was a big hit for a brief period, and then he was gone by the 90s. Today, as his first game is remastered, I want to dig into the history of this lost character.

Creator Kotaru Hayashida (also known as Ossale Kohta) joined Sega in 1983, and he made a series of games before he was put to work on Alex Kidd. As he notes: “It started about one year after Sega had split its development sections into two, arcade and console. Super Mario Bros was already a big hit by then, and the Famicom was building a rock-solid foundation as a game console. Sega had just put out the new Sega Mark III [released worldwide as the Master System], and they tasked us in the Second Development unit to create something that would sell as well as Mario. And so we set out to develop a new action game.”

Despite the positive reaction to Alex Kidd, sales of the Sega Master System failed to rise. Any affection for the character started to falter, too, as Sega began to force him into an awkward batch of sequels

Alex Kidd in Miracle World was an ambitious 2D platformer, a side-scroller that saw Alex head into dungeons, castles and caves in order to rescue his kidnapped brother. He was initially given a weapon, but a punch then became his main weapon, and there were also a number of vehicle sections. A key point of the game was to be different from Super Mario Bros – Alex Kidd could spend the money he collected in shops, buying extra lives or power-ups, for example. One of the big new developments were ‘rock, paper, scissors’ boss battles, something Sega was concerned about but Ossale found amusing: “Definitely, for people who are good at action games to lose everything and Game Over because of a rock paper scissors match… yeah, that sucks.”

Miracle World was critically acclaimed on its release – according to Computer and Video Games magazine, the “absorbing gameplay will have you glued to your screen for hours on end”. However, despite the positive reaction to Alex Kidd, sales of the Sega Master System failed to rise. Any affection for the character started to falter, too, as Sega began to force him into an awkward batch of sequels. He starred in platform games (1986’s The Lost Stars), a racing title (1987’s BMX Trial), an adventure game (High-Tech World that same year), and one of the earliest examples of a video-game mash-up (1990’s Alex Kidd in Shinobi World). He did get a little look at the future, moving to the Sega Genesis for 1989’s Alex Kidd in the Enchanted Castle, but his days were looking limited.

Sega essentially washed their hands of him entirely. As the company tried to carve out an edgier image for itself, Alex Kidd felt like a relic of the past

Sega was lagging behind Nintendo, and they needed a new mascot – one that was fast and cool, with a slick style of gameplay. They struck gold with Sonic the Hedgehog in 1991, who swiftly became their new mascot, but that left no space for Alex Kidd – Sega essentially washed their hands of him entirely. As the company tried to carve out an edgier image for itself, Alex Kidd felt like a relic of the past. Indeed, this was famously mocked in Segagaga, a cult title for the Dreamcast where Alex works in a video game store, spending his days lamenting his exploitation by Sega, who now hung out with Sonic.

It seemed for a long time that Alex Kidd would be doomed to make cameo appearances in titles celebrating Sega’s history – games like Sega Superstars Tennis and Sonic & All-Stars Racing Transformed, in which Alex was a face from the past a la NiGHTS and characters from the Jet Set Radio series. But then, out of the blue, a remake of the first game was announced last year, out today on all consoles. It’ll boast new levels, alternate boss fights and options for modern or retro graphics, and all eyes are on whether it retains the quirky gameplay and charm that made Alex a hit in 1986. As the game’s designer Jose Sanz says of the original game: “It was very unusual, but I think it still works today and it’s fun. It’s true that there are some mechanics that are obsolete or not seen so frequently anymore, but these are also things that make Alex Kidd unique! If we improve that, we still have a very good game on our hands.”

Alex Kidd occupies a key space in Sega’s history – he was their mascot without truly being one, and it was through understanding him that we got Sonic the Hedgehog. I won’t lie and claim that he has an incredible catalogue of games, because he doesn’t, but the fact that there’s such enthusiasm about a new instalment in the series shows that there’s still a lot of love out there for Alex Kidd.

From zero to Ultimate, a Smash Bros story